Progeny Software announced the release of a free update to their Map My Family Tree software. This popular mapping software imports Legacy Family Tree files and produces maps of the events of your family tree.

For more information, or to purchase

Many researchers jump right into the vast world of genealogy, but do not learn some of the fundamental pieces of the foundation.  A large part of any genealogist's foundation, is their genealogy computer program (Legacy Family Tree).  Knowing how to effectively use it, from the beginning, will ensure a solid foundation.

To help you "do it right the first time", we have created a series of training videos on CD. The goal of videos is two-fold.  First, you will learn how to use the Legacy genealogy software.  Second, and perhaps most importantly, you will learn various techniques that combine genealogy principles with your data entry.  In other words, these CDs will be full of real examples that you can apply to your own research problems.  For this reason, a CD which is produced at the beginner's level, will actually benefit users of all expertise.  These CDs are also designed to build on each other.  What you learn in the first CD will help you better understand the following CDs.  If viewed, and practiced in order, you will be able to spend less time trying to learn how to use the computer, and more time doing what you love - genealogy!

Legacy for Beginners. This video walks the beginning Legacy user through the basics of the program. View it free here. 48 minutes. Watch a preview. Purchase.

Your 12-Step Checklist to Using Legacy. Every Legacy user should follow these 12 steps when working with their family file. 48 minutes. Watch a preview. Purchase.

Researching with Legacy: Mastering Events and Chronologies. Learn how to properly enter and cite the documents you find. Watch a preview. Purchase.

Tagging and Searching Made Easy. Learn how to take advantage of the searching and tagging features in Legacy. Watch a preview. Purchase.

We wish all of our Legacy users a Merry Christmas!

How to create a list of "ancestors with no sources"

Most genealogists begin their research without understanding the importance of documenting what they find. Adding these sources just does not seem important at the time.

Over time, most of these genealogists begin to understand the value of proper documentation, and desire to examine their family file to enter the sources they have collected.

We're often asked, "How do I create a list of ancestors for whom I have not added any sources?"


Understanding the basics of Searching and Tagging provides Legacy users with answers to many of these types of questions. For more information, watch Tagging and Search Made Easy, or purchase it here. 'Twas the night before Christmas
When all through the house
Not a creature was stirring,
Not even my spouse.

The dining room table with clutter was spread
With pedigree charts and with letters which said...
"Too bad about the data for which you wrote;
Sank in a storm on an ill-fated boat."

Stacks of old copies of wills and such
Were proof that my work had become too much.
Our children were nestled all snug in their beds,
While visions of sugarplums danced in their heads.

And I at my table was ready to drop
From work on my album with photos to crop.
Christmas was here, and such was my lot
That presents and goodies and toys I'd forgot.

Had I not been busy with grandparents' wills,
I'd not have forgotten to shop for such thrills,
While others bought gifts to bring Christmas cheers,
I'd spent time researching those birth dates and years.

While I was thus musing about my sad plight,
A strange noise on the lawn gave me such a great fright.
Away to the window I flew in a flash,
Tore open the drapes and yanked up the sash.

When what with my wondering eyes should appear,
But an overstuffed sleigh and eight small reindeer.
Up to the house top the reindeer they flew,
With a sleigh full of toys and 'ole Santa Claus, too.

And then in a twinkle, I heard on the roof
The prancing and pawing of thirty-two hoofs.
As I drew in my head, and bumped it on the sash,
Down the cold chimney fell Santa--KER-RASH!

"Dear" Santa had come from the roof in a wreck,
And tracked soot on the carpet, (I could wring his short neck!)
Spotting my face, good 'ole Santa could see
I had no Christmas spirit you'd have to agree.

He spoke not a word, but went straight to his work
And filled all the stockings, (I felt like a jerk).
Here was Santa, who'd brought us such gladness and joy:
When I'd been too busy for even one toy.

He spied my research on the table all spread
"A genealogist!" He cried!  (My face was all red!)
"Tonight I've met many like you," Santa grinned,
As he pulled from his sack a large book he had penned.

I gazed with amusement--the cover it read
Genealogy Lines for Which You Have Plead.
"I know what it's like as a genealogy bug."
He said as he gave me a great Santa hug.

"While the elves make the sleighful of toys I now carry,
I do some research in the North Pole Library!
A special treat I am thus able to bring,
To genealogy folk who can't find a thing."

"Now off you go to your bed for a rest,
I'll clean up the house from this genealogy mess."
As I climbed up the stairs full of gladness and glee,
I looked back at Santa who'd brought much to me.

While settling in bed, I heard Santa's clear whistle,
To his team, which then rose like the down of a thistle.
And I heard him exclaim as he flew out of sight,
"Family history is Fun!  Merry Christmas!  Goodnight!"

For those waiting for the 1911 census of England and Wales, you just moved up in line! The National Archives recently announced that because of the Freedom of Information Act, portions of the census will be available as early as January 2007.

If you know the address of the 1911 resident, The National Archives will offer a limited research service. They hope to offer a searchable online service in early 2009. The census in its entirety cannot be legally released until 2011.

To learn what will be available and when, visit http://www.nationalarchives.gov.uk/1911census/.

Blogs are the hottest new thing in genealogy. They serve as a way of learning about genealogy, technology, and communicating research results with family. Legacy News is a blog (short for web-log).

One of our Legacy users, JL Beeken, has a new blog which focuses on genealogy technology.  Recent articles include:

RSS (if you don't know what this stands for, it's a great explanation)

Since JL uses Legacy, many examples are given on how to incorporate technology with our software.

If you like technology and genealogy, JLog is definitely one to add to your RSS reader or favorites list. Visit JLog here.

How to find ancestors who have missing information

I'm in the process of reviewing my entire Legacy database of individuals looking for missing information. I want to create a list of ONLY the male individuals of my surname indicated as having a spouse but no marriage information. Any ideas?

Gary, this can be done with a little creativity, and with a couple of different approaches.

In Legacy, click on the Search button. Click on the Detailed Search tab. Add the following conditions, and make sure to use the AND option for each condition.

Be sure that when you click on the "Second Condition" checkmark, that you select the "And" option. Now, click on the Create List button at the bottom.

You now have a list of all males of the desired surname, who are married, but do not have a marriage date.

For a different perspective, you can create a book report that will print blank lines for any missing information. For example:

To create this report:

But they weren't husband/wife!

I have entries where a male and female produced a son. The couple never considered themselves to be "wife" and "husband" and would not want to be displayed that way, even in private reports for their own records. Is there a way to specify non-traditional pairing terms in any or all "views" and reports?

Yes, Legacy has custom wording options to accommodate these situations. From the Family View, open the Marriage Information screen by clicking on the marriage bar in the middle.

In the lower part of the screen is a section entitled "Wording Options." If this couple was not husband and wife, simply change their labels here. For example, instead of husband/wife, change it to father/mother. When you're finished, click Save.

This customized wording applies only to this couple. When you print reports, such as the Family Group Record, select the option to "Use the phrases from the marriage records." This option is found on Family tab of the reports. 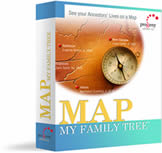 See your ancestors' lives on a map with this new one-of-a-kind mapping software.

Track family migrations using the world and country maps.  Then zoom into any part of the world to see detailed events in that particular location.

You can choose from 15 different map styles included with the software or customize your maps with over 16-million colors and a wide range of font styles and sizes.

Print your maps on a wide variety of paper sizes and/or electronically publish them to display on websites or email to family and friends.

Very easy to use, Map My Family Tree is rich with user-friendly features to help you better trace your ancestors’ lives. These features include:

Automatically Check Your Place Names
Map My Family Tree also automatically checks your genealogy database for place name typos, missing counties and other inaccuracies.  You may then copy and paste corrections to your genealogy file.

Plus you can look up over 3.3-million place names from around the world, including over 100,000 US churches and cemeteries.  This is especially helpful when you’re not sure how to spell Great Grandma’s home town or know which county she lived in.

Reads Your Genealogy File Directly
Map My Family Tree reads your Legacy family file directly, so you do not have to import a GEDCOM.

Order Your Copy Today
Priced at only $39.95 US, Map My Family Tree is available only on CD-ROM due to the very large database of place names.  Click here to place your order. 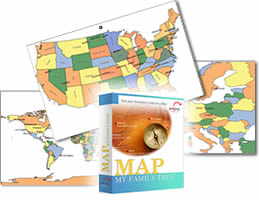