Legacy version 7 is getting closer to its release. We're still putting on the finishing touches, and we'd like your feedback.

On Tuesday, July 31 from 5:15-6:15, we are teaching a class entitled "Sneak Peek of Legacy 7" at the 31st Annual Brigham Young University Family History and Genealogy Conference in Provo, Utah. The class is held in room 2254. Seating is limited and the class is open to the public.

If you live in the Utah Valley area and want to meet the developers of Legacy, please stop by booth #1 in the Harmon Building on BYU's campus. The vendor area is open to the public, conference registration is not required. If you've been waiting for this conference to purchase our new Magnabrite magnifiers, we'll have them there too (no shipping costs!).

More than 100 classes
More than 100 classes will be offered throughout the conference, allowing participants to gain new skills and helpful information.  Class topics include Beginning Family History, Family History Center Support, Computers and New Programs, Europe/Nordic Research, British Research, U.S. Research, Methodology, and Publishing Family Histories.  We invite you to attend the conference to learn new techniques and to build and strengthen your family ties through genealogy and family history.

Stealing sheep or wool or cloth in 18th- and 19th-century England could land you a minimum seven-year sentence at an Australian penal colony, according to Ancestry.com’s newest online collection of Australian convicts records. For those interested in uncovering the criminal ancestors lurking in their past, the world’s largest online resource for family history today released the largest collection of Australian convict records, indexed and searchable online for the first time. Records detail the some 165,000 convicts transported to Australia from 1788 to 1868.

An estimated 22 percent of Australians are descended from these British exiles. Their sentences served, many convicts remained Down Under, becoming Australia’s first western settlers.

The British government deemed transportation, as the practice was known, just punishment for a mixed bag of crimes from marrying secretly to burning clothes. Although “felony,” “larceny” and “burglary” described the overwhelming majority of crimes, a few records include juicy details, such as, “obtaining money by false pretences,” “stealing heifers” and “privately stealing in a shop.” The convict records typically contain convict’s name, date and place of sentencing, length of sentence – usually 7 years, 14 years or life – and, sometimes, the crime committed.

“By today’s standards, many of these crimes are minor misdemeanors or are no longer illegal, and the severity of punishments seem ludicrous,” said Megan Smolenyak, Chief Family Historian for Ancestry.com. “No wonder Australians consider a convict in their family tree a badge of honor and seek to uncover the amusing, quirky and outrageous details in their family’s ‘criminal’ past.”

But as notorious as the Australian convicts might be, England first disposed of its felons in the American colonies. High crime rates and over-crowded jails led the English government to transport small-time criminals to British colonies. By 1775, England had shipped some 50,000 convicts to America. They worked as indentured servants, typically on tobacco plantations in Virginia and Maryland.

Tired of England deporting unwanted citizens to America, Benjamin Franklin suggested sending rattlesnakes to England in return – a sentiment shared by many Colonial leaders. The American Revolution ended convict banishment to the United States, and the British began shipping their criminals some 15,000 miles to newly discovered Australia.

Pocket Genealogist is the preferred software for genealogy on handheld Pocket PC devices. It allows you to carry your Legacy data with you wherever you go. To learn more, click here.

“We're especially excited about the Smartphone support since those devices make up a significant portion of the current handheld device market,” said Laura Phillips, vice president and business manager for Northern Hills Software.  “We’ve supported the Windows Mobile Phone Edition since it first came out, but the old Smartphones with no touchscreen just weren’t suitable for a sophisticated application like Pocket Genealogist.  However, with the tremendous improvements we’ve seen recently in Smartphone screens and navigation, we’re finally comfortable adding support for those devices.”

This release also includes better support for the use of Pocket PCs without a stylus, better Windows Mobile 6 support, and many other improvements.  It is a free upgrade for users who previously purchased Pocket Genealogist 3.x.

How to Purchase
For more information, or to purchase, click here.

FamilySearch announced this week the addition of three new resources to aid with Jewish genealogical research. The announcement comes as the 27th International Association of Jewish Genealogical Societies is meeting in Salt Lake City this week.

The new resources include:

Knowles Collection. The Knowles Collection contains information for thousands of Jews from the British Isles. Building on the work of the late Isobel Mordy, the collection links individuals into family groups. More names are added continuously.

Finding Jewish Records. In-depth guide to tracing Jewish ancestors from the U.S. to Europe between 1850 to 1930. Follow the steps to identify a birthplace or place of origin.

View these resources by clicking here.

How to send email with your cell phone

Imagine you're somewhere, and you just remembered something really important. Maybe you're driving, or you're at the grocery store. You have no pen or paper - no way to write it down to remember for later. But you have a cell phone. Using your free Jott.com telephone number, all you have to do is call, speak your message, and when you get home, your message will have been transcribed and waiting for you in your email's inbox.

It's so simple to use, there's not too much else that can be send about this new service. Business owners use it to send email to all their employees, students use it to remind themselves of upcoming homework, and genealogists use it to add to their research log.

Having used this free service for a couple of weeks now, I'm quite happy with the results. The transcriptions of my dictations are amazingly accurate. From the Jott.com website, "You may experience moments of pure relief after Jotting. Extended use may result in organized schedules, met deadlines, better connections, and more time in your day."

Give it a try at Jott.com.

"I just noticed that I've been spelling the given name of Isaac wrong. I've spelled it as Issac. I've done this for hundreds of people and don't want to manually change each one. How can I globally change all of the Issacs to Isaac?"

With Legacy Family Tree this is pretty simple to do. Follow these steps: 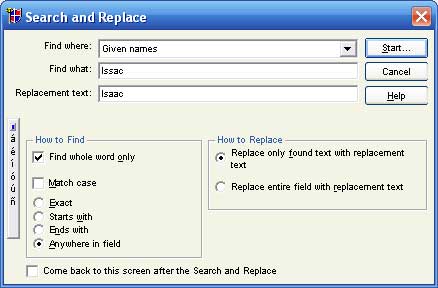 Remember those magnifier globes that sell out in minutes at genealogy conferences? They are now available for the first time from our online store. Perfect for reading small print, maps, photographs, census records, wills, newspapers, and more.

Our 4th annual Legacy Genealogy Cruise is right around the corner. This year's cruise to Hawaii (September 19-October 1) will feature several outstanding speakers, including Dick Eastman.

If you are interested, or want more information, please email our cruise coordinator, Christy, by clicking here.

Have you ever found a great website and wanted to share the link with someone via email? If the website's address (URL) is long, it is often difficult to successfully share the link. The recipient often has to cut and paste portions of the URL to make it work.

For example, suppose you use MapQuest to provide directions to your home for an out-of-towner. After MapQuest finds your home, you can send the URL to your visitor which looks like this:

Your visitor then tries to click on the link, but this is often unsuccessful because the URL is just too long. This is where TinyURL.com comes in very handy. Simply enter a long URL into their system and click on the Make TinyURL! button. The resulting URL looks like this:

Clicking on it takes you to the exact same place as the really long URL. Which link would you rather type, or cut and paste into your browser? Give it a try at www.tinyurl.com.

If your ancestor left the British Isles between 1890-1929, you can now search for their passenger lists online. Findmypast.com, in association with The National Archives, is actively indexing and publishing the images of the BT27 Outward Passenger Lists for long-distance voyages leaving the British Isles from 1960 back to 1890. To date, records cover 1890-1929.

What type of voyages are included?
BT27 includes long-haul voyages to destinations outside Britain and Europe. While countries such as Australia, Canada, India, New Zealand, South Africa and USA feature strongly, all continents are covered and you can find passengers on ships sailing to all parts of Asia, the Caribbean, South America and West Africa.

Searching the index is free, but to view the transcripts or images of the actual records requires a reasonable fee. To learn more and to begin searching, visit www.Ancestorsonboard.com.