News Home Legacy Webinars New to Legacy? Store
Why you should take a second look at a document you've had for years
Upcoming Legacy seminars - June/July 2010 - California, Colorado, Missouri, Oregon, Texas, and Utah

With today's technology, not much really surprises me anymore. However, as I am writing this, I am nearly stunned at what I am looking at.

I have a brittle, old photograph of my 3rd great-grandfather, David Brown (there I go again talking about my Browns...). Time has faded and cracked the photo. Many years ago I scanned/digitized the photo to preserve its current state. I really did not think there was much hope in ever restoring the photo to my satisfaction.

When Miles Abernathy (of 399Retouch.com and a fellow genealogist) offered to touch up one of my worst photos I knew exactly the one to send him. Less than a day later he emailed me the results. And here I sit, still comparing the differences, stunned. Here are the before and afters. You really need to enlarge the image (click on it) to appreciate the details: 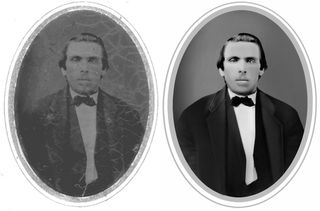 While I've never claimed to be a photo restoration expert, I know enough to do some good things with photos. Seeing what Miles did for David's photo gives me a greater appreciation for the experts out there. The experts certainly make use of the photo editing software's "Clone" tool.

Four years ago my son scored his first-ever goal for his soccer team. Of course we were all excited, and I even happened to get a picture of his reaction immediately afterwards. Also a part of the picture was another person, whom we've nick-named "Muscle-Man". While I'm sure he's a great person, I didn't want him to be a part of this picture. Using the "Clone" tool it was pretty easy to remove him. I know ... some will think that I've "changed history" now, and normally I like things just the way they are to preserve history, but my son is happy. 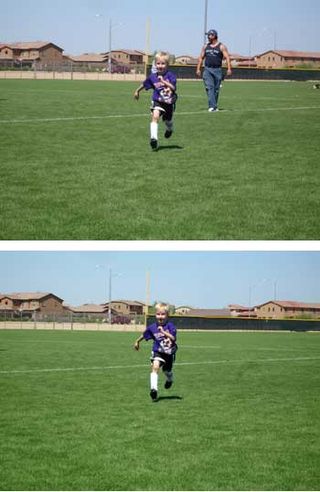 While I haven't even scratched the surface in this article, there are thousands of websites and books with tips and advice on how to restore and preserve your photographs. Cyndi's List lists 51 such resources here.

What about you? What experiences have you had in restoring old photographs or "cloning" to touch up your digital images? I'd love to hear your ideas in the comments below.

What is a good, if possible free, software to touch up photos?

Touching up old photographs with Photoshop is a very useful tool.

However, I'm more interested in touching up old handwritten documents. This is just not a case of making darker or blacker that what's already visible but more so about filling in parts of the penstrokes that have faded away or damaged when documents were folded.

To the best of your knowledge is there any software that would fill in the gaps or, failing that, would make it possible to trace the handwritten text to fill in the gaps?

Michael: Picasa works, although it has its limitations.

Picasa is extremely limited if you're talking about doing photo restoration. Try Paint.Net. It's also free but has a clone tool.

For the price you can't do better than Adobe Photoshop Elements. It's big, somewhat complex, but you would not believe what you can do.

I've been scanning and restoring old family photographs for 15 years. I've learned a lot, and technology has changed in the past 15 years. I guess I have some experience. Tips: #1 most important - ALWAYS scan in color! NEVER convert to grayscale under any circumstances! Old black and white photo processes have subtle yellows and blues in them that contain a lot of find detail. If you scan BW only, you lose that information. If you want to get rid of the sepia color, the paper has lost a lot of blue and some green. A little experimentation will make the photo appear BW, but with all detail in tact. #2: Always scan at least 300dpi, compression artifacts are invisible when you print 8 by 10, and you get every last detail in the original. So what if the file size is huge? Storage is plummeting in price. #3 the best retouch program I have found is Corel Paintshop Pro photo version 3 - their new "get rid of an object" tool would get rid of that muscle man in less than 30 seconds - select the object you don't want and activate the tool - done! No clone brush even needed. Better than Kai's Photo Soap that I used for years, it gets rid of scratches and blemishes on old photos much faster, and the intelligent fill with neighboring parts of the image is astonishingly smart.

I use GIMP. It's free and can do all I have wanted to do. A friend has even pieced together a photo that was torn and you can't tell where the tear is.

Corel Paint Shop Pro Photo is also a good software for restoring photos. I have restored very many of my family's old photos using this software. It has all the tools of Photoshop, but is more affordable. Having said that, do not go beyond Version 12 of the software until more fixes have been released for Version 13.

The best free software for photo enhancing is without doubt The GIMP. It has many of the functions of Photoshop, including the Clone Tool.

I have used it extensively for a number of years, and still do for that matter.

I use Photo Shop to improve readability of scanned documents hard to read because of fading. Carefull use of the Contrast control makes that data stand out. It works great!

Hi from NZ. We have had some excellent results with a free downloadable programme called Gimp.

Corel Paint Shop Pro is reasonably priced and has more than enough function for most photo restoration tasks.

PaintNet does a great job and.......... it's free. Just go to PainNET.com and down load it. It can do anything that the big guys, eg. photo shop can do.

Photoshop cs5 is the base standard. Scan at 1200 dpi at least and always as tiff files. If you are afraid of large files, buy a 500 gig backup drive -- they're cheap.

As for the portrait, it's way overdone -- he has given your ancestor a shave, changed his hairline, and removed far too much detail in the clothes. Good photo restoration should be judged by accuracy, not eye appeal.

One of my Irish cousins gave me a photocopy of an old worn out memorial card of my Great-Grandfather who died in 1921. A small company named "Photos Made Perfect" did a great job restoring this for me and were able to print another larger memorial card photo. Cost was reasonable.

No one mentioned Roxio. It has done quite weel by me, plus Creator 2009 handles file backups, Cd & DVD cration & a pile of other stuff. Based upon Bruce Carter's eval of Corel Paintshop Pro photo version 3, I'm quite anxious to give it a try!

All previously named programs are good to excellent to use, but one not mentioned, and able to do things none of the above do, is "IFANVIEW"
http://www.irfanview.com/ check out it's features, you'll be surprized.

I use it to do screen captures, crop what I want from any image, it adjusts from zero size to exactly the size image you paste.. (I find that VERY hard or impossible to do with photoshop). It does just about every image type...

I must defer to the old adage "You get what you pay for". I was surprised when I saw the before and after photos of David Brown (DB). There truly is a remarkable difference. However, what Miles Abernathy has done here is create a portrait of DB.

If you want a portrait, then Miles is your man -- and there is certainly a place for this type of work. But this article isn't about creating portraits but retouching and restoration; and what appears here isn't retouching and restoration by any sense of the word. DB is wearing a coat and vest and has a watch chain that is clearly seen in the original scan -- details that are lost from the "after" version.

Mile's is a professional (I wouldn't comment on an amatuer) and has a web site that frequently touts the advantage of low-cost restoration (all-the-while criticizing his more expensive competition). This is certainly the case where "you get what you pay for".

I have posted this link so that you may see the difference between a portrait and a restoration...as well as see what is possible. I used PhotoShop 6.0.1 (a very, very old version) and spent about 2 hours.

It's possible to have both accuracy and eye appeal.

I am in aggeance with William Tams, He has had a shave and has lost the lapels on the inner coat.

Very interesting comments Chris, Kim, and Wm. Kim, I think your "portrait" phrase is most accurate. I hadn't noticed his shave before. Nonetheless, it's amazing what technology can do, isn't it?

I agree, it is exciting to be able to see something more clearly that was so faded and scratched. I do not have skills to do photo-retouching, so it's great to read the comments of those who do, and find out what programs they use. My sister-in-law, who is an amazing photographer and skilled at Photo Shop, was able to restore a scanned photograph that my mother-in-law had sent me, and she did a superb job, in my uneducated opinion. I wish I knew how to attach the before and after pictures so you could see them.

Here is how to fix photos for free with GIMP.
http://showmedo.com/videotutorials/series?name=ZwgyiJVKa

Most graphic programs will do this, but GIMP is free.

I need to redo some videos, older files & something happened to the quality of the videos, I have figured out how to speed things up & make it easier. But it's a good start.

Most of the photo restoration I've done is using the Clone Tool in Adobe Elements. It's slow, slow work, sometimes days on one photo going down to the one pixel level to repair some of the more serious damage.

I agree with the above comments on Geoff's example of David Brown. That is not photo-restoration, but a quick whitewash technique. I don't know the exact term but I wouldn't want to use it myself.

General tips: Scan large, at high dpi (300-1200 depending how much you care about the photo) save as tiff, make a copy to edit.

I agree with all of the above, especially Kim's comments. Miles went far too far but I also think Kim has gone too far. Filling in scratches etc can do no harm and even fiddling a bit with contrast and brightness etc is ok within reason. However, I always believe in "doing as much as is necessary and as little as possible". This is a well tried conservators' approach.

I also scan at at least 1200dpi in TIFF format. A good photo printer will print at 600dpi so if you want to enlarge the picture (as most of us do) you'll have to scan at a higher resolution. ALWAYS keep the original (on a CD if necessary) and work on a copy. Only convert to JPG format after processing so you can pass a reasonable size photo/document to others. If they're really keen you can send them a copy of the unadulterated original as JPGs are pretty useless for restoration work.

I have been restoring old photos since the pre computer days with pens and pencils. I have a website www.photorestoration.viviti.com which also takes you to my genealogy blog, I will answer any questions you have through email - photo.restoration@y7mail.com I always feel as if I am adding new life to an old image when I restore it as close to its original as possible.

I am really impressed with the replies. Many thanks to all!