You know him as the guy in Legacy's sample file, or as the guy that I'm always using in my Legacy classes. Some of you have confessed that you know more about him than you do your own ancestors. Some have even suggested that some day I should focus on a different ancestor. We all have a favorite ancestor though, don't we?

Asa Clark Brown is my 4th great-grandfather, and he is ... great! Not only have I developed respect for him, but researching his family has developed and fine-tuned my skills as a genealogist.

One of my favorite documents of his is this 1936 illustration sketched by one of his descendants and published in a Minnesota newspaper 70 years after Asa's death. 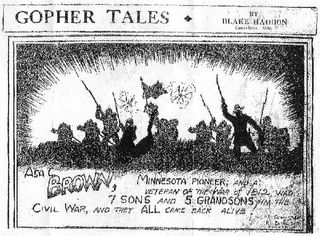 Not only is it fun to see my ancestor in a newspaper like this, but the illustration has some great genealogical clues. I already knew about his sons' military service and thought that I had documented all of it. I took another look at this today to be sure that I had all 7 sons' and 5 grandsons' military service accounted for. Well...uh...um...I only knew about 6 of his sons' service in the Civil War.

Asa had at least nine sons from two marriages:

As you can see, I have three choices. I'll probably start with Samuel. Because of his common name I haven't yet identified him beyond the 1850 Pennsylvania census, but with his exact date of birth (from the family bible) I'm once again anxious to find him. Maybe he's the 7th Civil War son.

Who would have thought that a newspaper illustration, seventy years after Asa's death, could provide such an invaluable clue? This clue of the missing 7th Civil War son was just what I needed to get my day started.

What about you? Have you discovered "new" information by taking a second look at a document years later?

I have been doing genealogy since for over 40 years (I started at age 18). I have found it very rewarding to revisit my earliest research and retrace my steps. In the process I have found new sources that were unavailable to me years ago. In addition my research skills have improved greatly. One thing I determined to do was add documentation to my early research files. You can't believe how this helped me correct mistakes, include new information and extend lines!

I've been at this for almost 10 years now and when I started it was before I found Ancestry.com and simply started a Google search for the family last name. Not surprising much of it was meaningless at the time in that I had so little starting information. So I started going through the earliest searches I had made and because of all the information I had gathered over the decade, suddenly many names meant something. I found children and grand-children for many in the family and have another two dozen names to do further research on. It was also a good opportunity to review the ones that don't belong and I was able to pass on useful information to other people not in my line, but with the same last name who had been looking for others. Just because they may not be in your line does not mean they aren't in someone else’s.

I like to revisit census records. Sometimes a "boarder" or "lodger" living with a family turns out to have a familial connection; but a connection we don't recognize right away because we don't know their names yet. Also, looking at previously overlooked neighbors can provide information, especially, when that neighbor marries your relative years later.

Jeff: All your tips are quite timely and hopefully, taken to heart and head by your followers. This tip, to revisit old records, is one of the most important things an "experienced" researcher can do. To carry this a bit further, check the witnesses names against "married in" relatives. Make sure the date on the document fits with your other facts. Could this document change the time line in some way? Just exactly WHAT does the document say. What can it tell you now that you didn't have supporting data to verify some years previous? There are so many things a fresh eye of experience can pick up from re-reading an old document. Keep up the good work with Legacy and your newsletter. A long time fan, Joyce