Beyond the obituary: researching your ancestors in newspapers

As genealogists, we turn to historic newspapers to find vital record information on our ancestors. Newspapers are great sources for birth announcements, reports of wedding anniversaries and the infamous obituary. But thorough newspaper research is so much more than just searching for vital record information. Newspapers provide us with details of life’s joys (births, weddings, accomplishments, milestones) and the more somber moments (deaths, accidents, court trials) as well as the day-to-day happenings (advertisements, Letters to the Editor, gossip columns).

Digitized newspapers provide us with the ease of finding articles that prior to the Internet took long hours of searching and scanning reels of microfilm. Even after putting in the necessary hours bent over the microfilm machine it was still easy to miss mentions of an ancestor. Now with GenealogyBank, finding your family is as easy as typing their name into a search engine.

So what are some of the articles that you might find your ancestor in? Consider some of the following examples that prove with a little time and effort you can piece together the story of your ancestor’s life 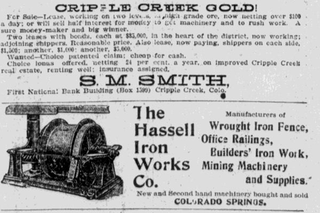 Aside from information about an ancestor’s business, advertisements allow you to reconstruct the community your ancestor lived in. Advertisements can help you determine possible records and manuscript collections that may exist. An advertisement for a physician provides you the information you need to search for records left behind by that doctor that in turn may mention your ancestor and their family.

Ancestor Wanted by the Law
Did your ancestor find themselves on the wrong side of the law? Maybe a few indiscretions caused them to be mentioned in the newspaper. While a crime may warrant a front page article, don’t forget to look for other types of articles about subsequent criminal trials, police blotters, arrest reports and even advertisements. Consider the following advertisement published in the Alta California from September 1850. 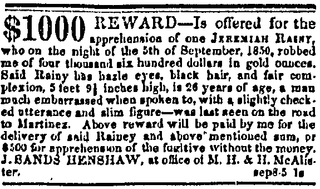 While not flattering to the accused it does provides a useful physical description (hazel eyes, black hair, fair complexion, 5’9 ½ inches and 26 years old) along with a perceived characteristic (“a man much embarrassed when spoken to”).  In this case, more research would be needed to see if any additional articles mentioned him in future newspaper editions.

Organizational Memberships
Our ancestors loved to join clubs and social groups. Just as today, membership in social and fraternal organizations provided a sense of belonging and in some cases other benefits. While not all membership records are archived, you may have luck learning more about an organization, and possibly a mention of your ancestor, in the newspaper.

The Women’s Christian Temperance Union (WCTU) is one such club that your female ancestor may have belonged to. The WCTU was organized in 1874 out of a concern that the abuse of alcohol had negative effects on individual families and society.

Mentions of the WCTU can be found in numerous articles in newspapers throughout the United States. Coverage of the WCTU included everything from protests to articles by members about temperance.

This short article about the WCTU national elections illustrates the importance of conducting searches of your ancestor’s name without a specific locality. Notice that this article includes the names of the women elected and their residence. This Phoenix, Arizona newspaper includes the names of three newly elected offices in the WCTU who are from Maine, Kentucky and Missouri. One of the benefits of having access to digitized newspapers is the ability to search an ancestor’s name and finding hits for that name in newspapers all over the United States. 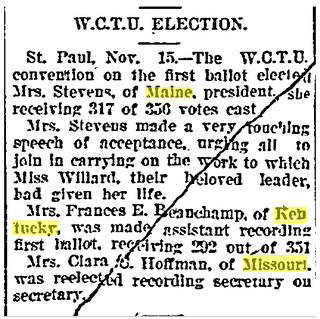 About Town
Imagine if your local newspaper reported on where you went shopping today or who you had lunch with yesterday. While today we have social networking tools like Facebook to report on our comings and goings, 19th  and 20th century small towns had the newspaper.

These reports often provide information ranging from where a person traveled to, where they shopped, visitors they welcomed, who was ill, or who came to the funeral. These mentions can provide important details to your family history. For example, knowing that a person was ill a week prior to death provides insight into the information found on a death certificate.

The following report from Omaha World Herald (Nebraska) describes the happenings in the Council Bluffs area. Notice that these reports include vital record information, including two funerals and a birth. This is also were you might find mention of an ancestor who has since left town. 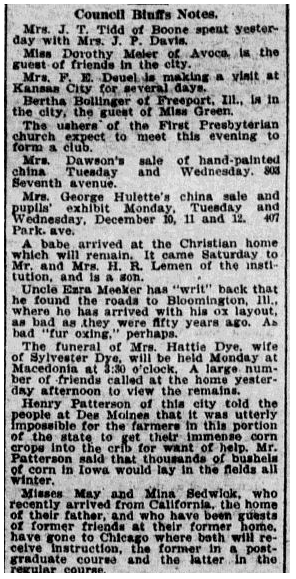 Letters to the Editor
Our ancestors appear in all parts of the newspaper as articles documented their lives. In some cases, they were not written about but instead were the ones writing. Our ancestors wrote letters that were published in the Letters to the Editor section of their local newspaper. Having an ancestor who penned such a letter is like learning more about their thoughts and beliefs. Letters to the Editor feature reader’s commentary on political and social happenings as well as announcements of interest to the local community.

While the majority of Letters to the Editor are from community members to their local newspaper, in some cases letters may have appeared in other newspapers as well. This following letter appeared in the 18 October 1916 Oregonian; it originated from a Oregonian native who had relocated to Canada. Her letter is especially interesting because she names other people, talks about where she was born, gives her father’s name and then a history of a local Canadian river. While not all Letters to the Editor have so much genealogical detail, they will provide you insight into the life of your ancestor. 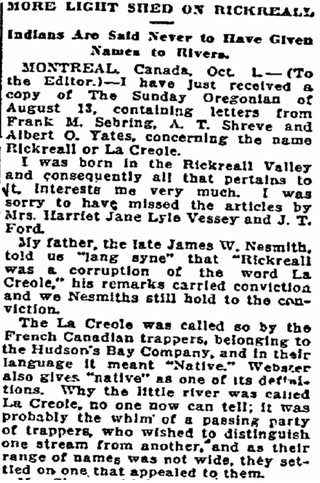 As you search the newspaper for your ancestor, remember that Letters to the Editor may be signed by more than one citizen, signed as an individual or signed with an alias.

As you search newspapers for your ancestors, remember the rich diversity of articles that might mention them and the events of their lives. Aside from just searching on your ancestor’s name, learning more about the history and the locality they lived in from the newspaper of the time also are valuable resources in piecing together our ancestor’s lives.  Search historical newspapers today and see what genealogical treasures are in store for you.

Huge Historical Newspaper Archive at GenealogyBank.com
One of the key sources for online newspapers is GenealogyBank.com. By providing access to rare and hard-to-find newspapers from 1690 to the present day, GenealogyBank gives researchers the opportunity to discover unique, long-forgotten information about their American ancestors.

Featuring more than 5,000 U.S. newspapers with over 1 billion names from all 50 states, GenealogyBank is one of the most extensive online historical newspaper archives available anywhere, designed specifically for family history research. Over 95% of our newspaper content is exclusive to GenealogyBank.

You can also subscribe by phone 1-866-223-8535 (M-F 9am-5pm MST) and mention product code 1105L1. There’s never been a better time to explore your family history. You are just a few clicks away from fascinating facts and stories from your family’s past.

SAVE 25% and Get Unlimited Searches – Expires May 31st!

A "published" family legend has my gggfather drowning in the Mississippi River on 8 March 1846 while working as a "leadman" on the steamer GLOBE. This has never been documented or substantiated in any way, just word of mouth family legend. I have researched obituaries and every kind of record I could find from Nauvoo to St Louis without any record of this accidental death. One day I put "Richard Hardman drowning" in the search feature of GenealogyBank.com and got a hit. No it was not from a paper along the Mississippi, but rather from the SAYBROOK Connecticut Constitution dated 2 June 1847. The item describes Richard Hardman as one of the hands on board the steamer Globe falling from plank before the steamer reached the wharf. I feel this similarity of name, steamer name, situation are not just a fluke. The only variance is the location and the date. I am trying to establish the shipping routes of the Steamer Globe thinking perhaps it plied the Mississippi River as well as the east coast. It is very possible that Richard was with the steamer on a continuing basis trying to make a living for his family which was stranded in Nauvoo. I endorse GenealogyBank.com and hope this leads me to information to refute long standing unsubstantiated family legend.

Senior citizens cannot afford the above prices to join.. Come out cheaper going to a library or geneology center.

I signed up for one year of GenealogyBank.com and it probably will ONLY be one year. At $59 per year, the price is much too high for anyone outside of a professional genealogist (i.e., one who is getting paid to do this type of work and probably has the cost of things like GenealogyBank.com subsidized by their employer).

One other comment...I notice that a lot of the search tips I receive from Legacy blogs, other genealogists, webinar trainings, etc. always seem to reference activities that my mostly working class and poor relatives probably would never have come close to (e.g., professional societies, businesses they might have owned, Letters to the Editor, Society sections of newspapers, etc.). In fact, the ONLY example in the short article above that might apply to my ancestors is the "Wanted by the Law" one! :)

It would be nice to have someone write a book or a how-to article about how to research COMMON FOLK instead of the "royal" types that seem to appear in all the examples I come across during my reading and training.

I cancelled my subscription within 30 days. I did not find ANYTHING for any of my ancestors, or news papers for their areas. I have much better luck with footnote and ancestry.