Just because you find a person's headstone in a cemetery does not mean they are buried there....

Dave and I recently finished photographing every headstone of my local cemetery in anticipation of adding them to the Find A Grave database. Of the nearly 1,500 pictures we took, I am surprised at how many "pre-need headstones" there were. Here is an example of a pre-need headstone: 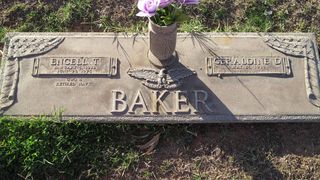 This headstone was created for both Encell T. Baker and his wife, Geraldine D. Baker. Encell died in 1975. Because Geraldine does not have death information included, my guess is that she anticipated sharing the plot with her husband when her time came and prepared her part of it with her name and birth date.

So although it appears that she shares the plot with her husband, there are several reasons why she may not be buried there:

A quick search of the Social Security Death Index shows a Geraldine D. Baker with the identical birth date, who died on November 15, 1994 whose last residence was in San Diego County, California. From my experience, this is likely the same person. It is also likely that she was buried in California.

I've not given this too much thought yet, nor have I encountered this situation in my personal research. How would you record this in Legacy? Buried in two places? Just use the headstone as a source of her birth? Any other ideas? What experience have you had with pre-need headstones?

I have come across this type of scenario and similar ones in my own personal research several times.

I find that The old "K.I.S.S." works the best for recording these kind of situations. All info I obtain is considered as valuable leads for further research, as we all know many headstones can/do have erroneous inscritptions.

(1) I input the pre-need burial info/pics in the Burial notes section in legacy, and indicate it as such. I create an event record with the heading of "Alt. Burial-Date", -Loc, -Info (for other pertinent info/remarks).

(2) I place (if known) any of the "actual" burial info in the regular "Buried" information section.

This works for my needs and is simple.

I also had a case where a Civil War soldier killed in battle and he had a big marker placed in his hometown cemetery by someone but, was actually buried in another state where he died and I have not been able to locte his actual grave to date.

It is also possible the wife IS buried there, but the family neglected to pay the stone carver to update the marker. You should check with the cemetery records to determine if there was a second burial in the plot. When you photograph an entire cemetery, if it is an actively used site, usually it is a good idea to connect with existing cemetery records about the burials. The family may be slow in taking care of this final detail.

After doing over 7000 memorials and over 15000 photos I to have run into many preneed stones. As I did 3000 of the newer graves this last week I found many of them.
There could be other scenarios to consider:

4. She IS buried there and no one got the stone engraved.

5. Family had no idea there was a pre-need stone or plot and she could be buried elsewhere.

If you do more research of death notices,obituaries and funeral home and Cemetery records you can see if and where she may be buried.

These sources also offer a wealth of information. Contact the local Genealogical Society and you may surprised at what they have... I was! Have fun!

Recently, I found a cemetery containing the headstones from 2 other cemeteries. The local library and the cemetery committee both said that the stones were probably added as markers only and that the persons in question had not been moved across the county. However, several of the stones are definitely from the time that the person would have died (mid to late 1800s) and all of them from a given family cemetery are now in a different cemetery.

I don't think I'm ever going to get a good answer to the question; like you, I've been trying to figure out a good way to note this. I keep hoping that someone on a board will confirm a move sometime between 1975 and 2010. The suggestion by Robert seems valid, although I would probably create 2 alternate records in the case of some where I can no longer be sure. Looking forward to other suggestions that folks might have.

Of course, the 4th possibility is that she is buried there but the family never updated the stone.

This is a not uncommon occurance in South Africa, particularly amongst the Afrikaans speaking sector of the population.
Military deaths are often memorialised in a Family grave site stating "Killed on Action" followed by the date and usually the place and some will include the actual place of interment.
I am a volenteer worker for Ancestry24.co.za

Being a Cemetery Secretary, the best way to handle this is to enquire with the Cemetery Trust if there has been a burial there, they can check the records to tell you who is actually buried in that site.

My great-grandfather fits this situation. His wife died and was buried in Missouri. He was unable to live alone and had to move to Florida to live with his daughter, my grandmother. When he died he was buried nearby in Florida with a grave stone that has all the pertinent information. He also has a gravestone in Missouri with all the vital statistics next to his wife's grave, probably placed there by one of his children. Anyone not familiar with the situation might think he was buried in Missouri.

My wife and I had an experience where the wife of the deceased was on the headstone but with no death date. We wondered if she had died but found another relative who answered the question and told us she was alive and living in a nearby town. We knocked on her door - she didn't have a clue who we were. Before we left her we had several great leads to people we had be searching for but had not found. It was a great experience.

Another possibility is that the remains were never recovered or that the exact date of death was not known. I had two relatives who were killed in military plane crashes. One of them was somewhere over the Pacific, and his body was not recovered. In both cases, headstones in their hometown cemetery where their parents are buried recorded their dates along with those of the parents' who died later.
There can be many other scenarios, such as fires, floods, lost at sea, etc. where a body might not be recovered but where tha family wanted a gravestone as a memorial. In those cases, it wasn't a "pre-need" gravestone without any dates. The dates were there on the msrker (even a picture of the deceased on one of them), but only the bodies of the parents were actually buried there.
Another relative with dementia wandered away and became lost in a remote area. Her body was found weeks later making the date and time of death uncertain.
While these are not "pre-need" cases, they show that the whole story can not be determined from the gravestone.

I also saw a marker at Resthaven Cemetery in Glendale, Arizona very similar to this situation. My grandfather's very good friend had his wife on his marker with a birth date, but no death date. She re-married and moved back to Oklahoma and I assume she was buried there.

Found headstone for a late relative "in memory of" on wife's headstone. he was actually buried in a "sanitarium" (read "hospital") cemetery with few markers remaining (mostly unreadable). Though the row and number were known the cemetery was in such a condition as to not be able to locate with any reasonable certainty the physical location.
It is one of those things that shows that we really have to do good research to find out the actual facts of the situation.It is always a challenge.

I used the marker as a source for a name, birthdate and marriage. I then write in the notes that the marker has no death date and it is unknown at this time whether the person is buried there (or even deceased). I think resesrch it just as you did to see if I can find out.

I own an Monument Company and a larger percentage than you might think of customers are pre-need. They like to have it taken care of so their families don't have that stress when they pass, while others choose to purchase while they are still with us because they want something particular for their own memorial. Either way, my customers seem to enjoy taking part in the choosing of their headstones.