Genealogy on the Go - the "Families" App for Legacy - free webinar Wednesday, April 11 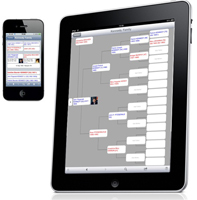 Got an iPhone, iPod Touch, iPad, tablet, or an Android smartphone? With the "Families" app you can take your Legacy Family Tree files, pictures, and To Do List with you - to the library, cemetery, or anywhere else. You can view AND edit the data on your mobile device and synchronize your changes back to your Legacy file on your computer. Join the developer of Families, Malcolm Green, for a demonstration of how it all works and what it looks like.

The live webinar is scheduled for Wednesday, April 11, 2012 at 2PM Eastern U.S., so register today to reserve your virtual seat. Registration is free but space is limited to the first 1,000 people to join that day. Join at least 15-20 minutes early to ensure your virtual seat.

If you are considering becoming a professional genealogist or starting your own business, watch the recording of today's webinar co-presented by John Kitzmiller and Claire Brisson-Banks, and sponsored by the International Commission for the Accreditation of Professional Genealogists (ICAPGen). They discussed the two credentialing organizations - ICAPGen and the Board for Certification of Genealogists, what it takes to run a genealogy business, and then had a great question/answer session.

If you could not make it to the live event or just want to watch it again, the 1 hour 32 minute recording of The Pursuit from Genealogy Hobbyist to Professional is now available to view in our webinar archives. Visit www.LegacyFamilyTree.com/webinars.asp to watch.

The special discount coupon of prof that was announced during the webinar is valid for 10% off anything in our online store through Monday, April 9, 2012.

Thinking of becoming a professional genealogist? Join John M. Kitzmiller, II, AG and Claire V. Brison-Banks, AG for a webinar this Wednesday, April 4. The Pursuit from Genealogy Hobbyist to Professional will be sponsored by The International Commission for the Accreditation of Professional Genealogists (ICAPGen).

Several terms are applied to individuals that are interested in their ancestors. Those who are fascinated by the story but not really interested in the data could be termed amateurs. Moving up a rung on the ladder would be the hobbyists, who gather photos, letters and family memorabilia to share with others. They quite often are members of societies, are familiar with local history, and help others to find their ancestors. This group is quite underestimated, in that many have self-taught expertise and are quite knowledgeable. However, most of them do not charge money for their assistance. The next step is to operate at the “professional” level, which requires perspective, attitude, methods, process, and some business skills. This webinar will discuss various ways to make that transition.

The live webinar is scheduled for Wednesday, April 4, 2012 at 2PM Eastern U.S., so register today to reserve your virtual seat. Registration is free but space is limited to the first 1,000 people to join that day. Join at least 15-20 minutes early to ensure your virtual seat.

Genealogists across the United States had a hard time sleeping last night as they anticipated the release of the 1940 U.S. federal census this morning. I think there must be millions of us trying to access the same images at the same time this morning because the images haven't been able to load for me yet. And so while my anticipation climbs I thought I would publish a few links and a press release for you below.

WASHINGTON, D.C. (April 2, 2012) – The 1940 U.S. Census Community Project—a joint initiative between the National Archives and Records Administration (NARA), Archives.com, FamilySearch.org, findmypast.com, and other leading genealogy organizations—announced today a national service project to create a free, high quality, searchable database of the 1940 U.S. census records. Through the indexing efforts of online volunteers across the U.S., records from the 1940 census that were closed by law for 72 years will be easier to find. These census records capture countless untold stories of those who lived through the Great Depression—great men and women who have been called “the greatest generation.”

With the support of NARA, the 1940 U.S. Census Community Project is leading the digital transformation effort to create an index entirely by online volunteers. Fueled by the joy of discovering fascinating surprises from their own family history, volunteer indexers are excited to join many thousands of Americans in an online community effort to make the historic 1940 U.S. census readily searchable for others.

“Many of us living today know someone in the 1940 U.S. census, but we may not know much more than their name or the town in which they lived,” said David S. Ferriero, archivist of the United States. “The 1940 census will unlock some of these mysteries for us. We are delighted to join with the U.S. Census Community Project to produce an index which will make this census much more user-friendly.”

When complete, the index and images will also be available online for free through the sponsoring organizations’ websites. Those interested in lending a hand can learn more and sign up to be an official 1940 U.S. census volunteer indexer at the 1940 census website (the1940census.com). The project aims to make available to the public a fully functional, free, and searchable record database by the end of 2012.

“Many parallels exist between life in 1940 and 2012: international conflict, the political intrigue of an election year, and efforts to rebuild a flagging economy,” said Dan Lynch, spokesperson for 1940 U.S. Census Community Project. “Our goal is that through the work of online volunteers across the nation, a fully digitized and searchable database of the 1940 census records can help strengthen connections between Americans, their families, and an important time in our collective history while bringing renewed understanding of the resolute courage past generations had in restoring America.”

The 1940 U.S. Federal Census is the largest, most comprehensive, and most recent record set available featuring the names of people living in the U.S. at the time. In fact, the census contains more than one million pages and features a depth of detail that paints a more complete portrait than was previously available of the 132 million people living in the U.S. during the Great Depression. From this new vantage point, we can learn about the life and times of our people living 72 years ago. Several new census questions appeared for the first time in 1940, including:

Perhaps more so than at any other time in American history, these individuals taught us lessons in hardship and survival. The Great Depression, the Dust Bowl, and the subsequent New Deal programs have left an indelible footprint on American history. In addition, many of these men and women listed in the 1940 census went on to support the fight or actually fought in World War II. Helping index the census, for many, is a way of giving something back to this great generation and rightfully preserving their place in our nation’s history.

About the 1940 U.S. Census Community Project

The 1940 U.S. Census Community Project is a web-based, national service project with the goal ofcreating as soon as possible a free, high quality online index linked to the complete set of census images. The index will allow the public to easily search every person found in the census and view digital images of the original census pages. The collection will be available online for free to the general public at 1940census.archives.gov, Archives.com, FamilySearch.org,and findmypast.com, the respective website sponsors of the community project. Archives.com and findmypast.com will make substantial financial contributions to make the 1940 U.S. census online name index possible and will work with the nonprofit organization FamilySearch to bring additional new historic records collections online—making even more highly valued family history resources available to the entire genealogical community.

Fifteen years ago today, on April 1, I proposed to my then-girlfriend, Tanya Hague, in a Family History Center on the campus of Ricks College in Rexburg, Idaho. She accepted my proposal. Today we wonder - was the joke on her that I proposed, or on me that she said yes? It's been a fun ride and we've made a little family history of our own along the way.

This is me putting the ring on her finger. Notice two other things - her beautiful yellow student employee vest and the microfilm reader in the background! I thought we would have a life sleuthing cemeteries together. She was just there for the student employment. 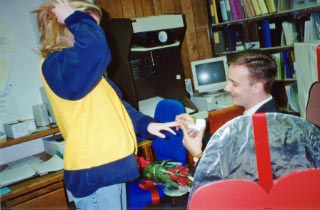 She didn't stick around for long that morning. Shortly after she said, "well, I gotta get to class before I'm late." But she has stuck around for 15 more years - and it keeps getting better. 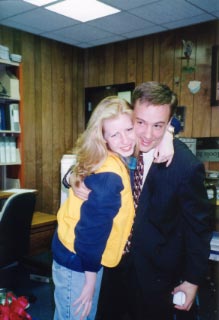