Two years ago Tanya and I were on our way to Paris with our friends. It was the day after our European cruise ended and we stayed an extra day because Paris was so close to London. On the subway Ken asked, “does everyone have their passports?” Everyone did – except for us – they were still in the hotel. We bid our adieus as we got off on the next stop to make our way back to the hotel with the hope of catching up in time to take the chunnel to Paris. I think we would have had better luck had we known what stop our hotel was nearest. Instead, our search for the hotel turned into a self-guided tour of London. Although we had a great time together we knew we missed this once-in-a-lifetime opportunity.

Today we checked and rechecked several times to make sure we had everything we needed. About sixty others from our Legacy grouped joined us on the 2 ½ hour bus ride into Paris from LeHavre. Here’s a picture of our first view of the Eifel Tower. 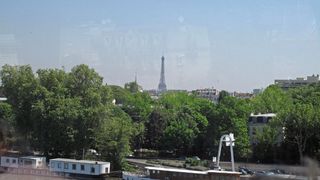 We saw many of Paris’ famous landmarks and ate lunch at Chez Jenny’s. Our first course was a plate of sliced tomatoes in a delicious olive oil dressing. Delicious: 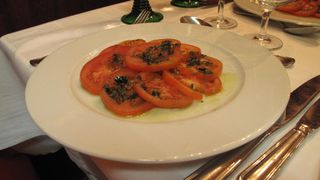 Dave, who has spent his life cursing tomatoes, didn’t think so. His plate ended up looking like this: 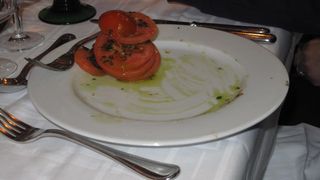 Our main course was duck and potatoes. The last time I had duck I was a child – I remembered liking it as much as I like squash or spinach. This time, to be brave in front of our guests, I ate it and it kind of tasted like – chicken.

We next took a boat ride where we saw more of the sights, including the bridge of padlocks. A new tradition in Paris, couples attach their padlock to the bridge and throw the key in the river, thus locking their love in Paris. I’m a romantic and I like the idea. 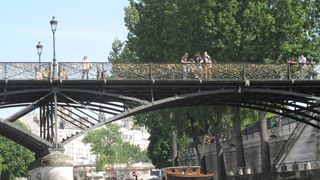 The guide then pointed out the “most romantic bridge” in Paris and suggested that we do something about it. So Tanya and I did, which was fun, but looking at the pictures afterwards I discovered for the first time that I had the beginnings of my first bald spot. Grrrr….

Finally we made our way to the Eifel Tower which was really, really, really tall. We didn’t have time to climb it. But thinking back, it would have been fun to miss our ride out of Paris and have an extra day or two there. 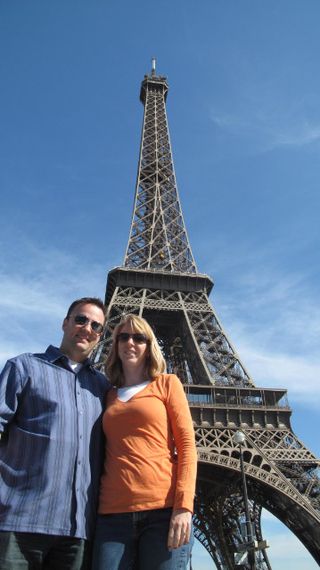