It has now been almost two weeks since I upgraded to Windows 8. I wrote about the ordering, downloading, installation, and running Legacy here and here. With these two weeks of experience, I can offer a better recommendation on whether to upgrade to Windows 8 or not.

First of all, it was a pretty simple process to upgrade on my main computer. But on my laptop, I had to first uninstall several programs before the installation would continue. These programs were pre-installed utilities on the laptop which I have never used. Other than that, it was a pretty painless process.

Once I really began using Windows 8, I ran into some pretty big problems - mostly inconveniences that should be expected when upgrading to a new operating system. I had to uninstall several important programs including Quicken (all my finances) and Camtasia (my webinar video production software). I actually had to upgrade to the newer version of Camtasia also, as my version did not support certain aspects of Windows 8. This new version removed some of the functionality that I used to have, and I am still trying to learn how to best produce new videos.

I now usually switch to Desktop mode, which gives me the same look and feel as Windows 7, except that it no longer has the Start button. I have learned several helpful keyboard shortcuts, and have learned how to customize my Start screen to group similar tiles. 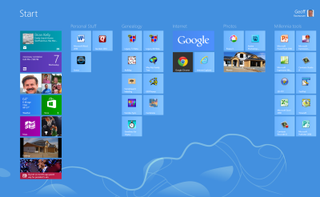 All in all, Windows 8 appears to be optimized for tablets and touch screens, but not so much for my Windows-7-way-of-doing-things mind. I feel that I have not yet gained anything by upgrading my PC and laptop, other than to be able to say that I have made the plunge.

Having said all this, I cannot wait for the Microsoft Surface Pro tablet to become available in early 2013. I currently use an android-based tablet (the Asus Transformer Prime) and love it! I can access the Internet, my email, calendars, e-books, and so much more. With the Families app I can view all of my Legacy Family Tree data. Microsoft just released its competitor, the Microsoft Surface tablet, which can probably do most of these things too (I don't think Families runs on it yet though). The Surface runs the Windows RT operating system, which is a stripped-down version of Windows 8, and you cannot run all of your current Windows programs on it. The Surface Pro will include the full-blown version of Windows 8 which will allow me to run any Windows software - including Legacy Family Tree! I cannot wait to be able to have my entire Legacy software with me on my tablet. Mobile Magazine wrote a nice review of this recently.

So should you upgrade to Windows 8?

Probably not, unless you have a touch screen monitor or the Windows Surface tablet. You really won't gain anything but a few headaches and new things to learn if you have a PC. Next year, however, will be a new story when the Surface Pro arrives.

What about you? Have you upgraded? Why or why not?

Upgraded to Windows 8 (won't pay for it, but had the option through my association with the IEEE society) and hate it as much as I thought I would. I am working on a second degree in computer forensics so need to know the system, which is the only reason I upgraded. I like my Android tablet and won't upgrade to Surface simply because Microsoft is trying to become the next Apple (all products work for interoperability without working with outside competition) which is fine for some, but I have never been one for proprietary operating systems or hardware. Open Source is my choice these days and I think, with the advent of Windows 8 and the horrible metro interface, they have helped me to make my choice to really drive towards Linux full-time.

As with your setup above, I log in and immediately go to desktop (I am using a third party app to restore functionality of the Start button) so I don't generally see most of the Metro interface. Finding that there is a lot of work to be done to restore even the most basic functionality and as for administration, Microsoft in their infinite wisdom has really made it even more difficult and convoluted for administrators to get the nuts and bolts of the OS...

Sorry if that got too 'ranty!'

After having read this article I will stay with Windows 7. It's good enough for my purposes. I want to avoid the problems discussed here.

Thank you for the review of Windows 8. I have the option of an upgrade for $20.00, but will stay with Windows 7 on my laptop. When I have a touch screen I might think about it again.

I'm still running Windows XP on my (new) desktop computer and on my "old" laptop. I have been waiting for Windows 8 so could leapfrog to it. However, after reading many different reviews of Windows 8 and experiencing it first-hand, I believe I will wait until XP becomes unsupported by Micro$haft and then make the change to Linux (or other *upgrade* alternative available at that time).

I've been using Win8 for over a week now and have mixed feelings. I used Stardock to bring back the start menu (which even with Win7 I don't use much) and have used the desktop part of it more than the Start screen. My new computer is an HP touchscreen desktop (which HP is moving towards for all its desktops and laptops) and the Start screen is useful for many of my needs. I like the familiarity of the desktop which I am "comfortable" with (as I believe is why all the negatives against Win8, people forced out of their "comfort zone.")
With tablets becoming more powerful with each generation I see them more in everyday use by school classrooms to police officers and taking place of laptops in many instances. The Win8 "Metro" interface - similar to the design of Apple's iOS - I feel is the new standard and is here to stay.
Without the touchscreen interface (which most computers, desktops & laptops are going to) then Win8 probably is not worth the upgrade for most people.

I've been running XP Pro for many many years, and now that Windows 8 was to be released soon, I decided to check it out at some stage and I was on my way to do the grave yard shift for work, On my way to the site I called in to my locale supermarket for munchies and and noticed that the latest Australian Tech Life computer mag (November)was there, couldn't miss that, reading it later, I saw that Windows 8 would be good move, even though it did'nt have the "start menu", the mag said it could be liked back in, so I decided that would I upgrade, Anyway Its all installed on a New Sata HD drive and my Old IDE HD is still in there, but is now a slave HD drive, so I can still access the Data still on it, and Also Windows 8 still allows me to Boot from it :)and it does, not that I would want to run on XP, now that I have seen how Windows 8 runs, I'm tweeking W8 to run my way :)This All runs on a Desktop machine for your info.

Thank you for the good information, and good comments. I'll wait. At 86 I am still learning but take it slow.

Instead of just upgrading from Windows 7, when I downloaded Windows 8, I burned the ISO file to a DVD and did a full install formatting the hard drive on 3 different computer: 2 desktops and 1 laptop. Make sure you have EVERYTHING backed up before you do this. It took a lot of time but it was worth it. The laptop was a completely different computer, with much faster boot-up times. I also installed Stardock's Windows 8 start-up software. So I'm using the familiar desktop and learning Windows 8 Metro screen along the way which for me is better than going cold turkey with just the Metro screen.
Strange as this may seem, I am a very pleased Windows 8 customer. The significant gain in performance was worth all the hard work, particularly with the laptop. Given the discount price right now, I would recommend it to anyone. Just be careful, take your time and do it right the first time.

I bought a new laptop just before the switch to Windows 8 and I have a discount to download to Windows 8 but I have gone into the computer stores to have them walk me through the program several times, but I am still very hesitant about it until I am sure I want to do this switch. I may not as I am happy with Windows 7 but will try to learn more about it to keep up with all this new technology.