Legacy 8's new Origins and Migration reports help you better visualize where you come from and where one's descendants have migrated.

My children have especially enjoyed the new Origins report. Since I am American and my wife is Canadian they wanted to know where they fit in. Analyzing our immediate family, the easy answer is that they are 1/2 American and 1/2 Canadian. The Origins report clearly shows this:

But looking back in time a few more generations surprised all of us: 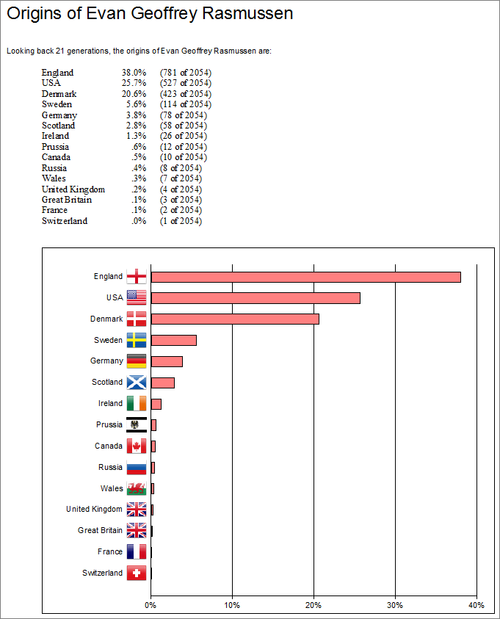 I haven't yet shown this to my Canadian mother-in-law (very patriotic!). I wonder what she will think. She does, however, sometimes read these articles so I think I will leave it at that.

This report works best when the place names have been accurately entered. One of the report's options is to "Include a list of any unrecognized locations." Had these locations been entered correctly and consistently, the percentages above would change a little. (Oh how I wish that I wouldn't have imported what I did into my software when I began my genealogy years ago....) 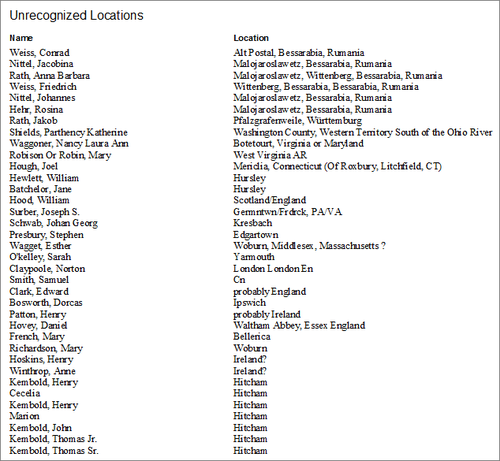 Seeing where one's descendants were born is equally as fascinating! Of Asa Brown's 207 known descendants it looks like most of them stayed in the United States:

When this is the case, select the "Go down to the state level" option in the "For US Locations" section of the report options: 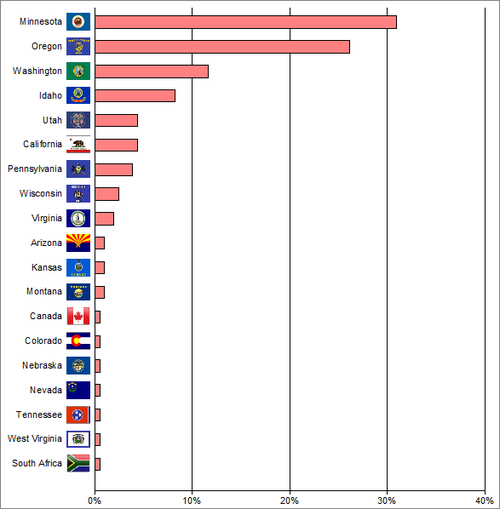 Not only are these charts fun to look at, but they would be a nice addition to any book you create using Legacy's Publishing Center.

So what do you think? Do we have another winning new feature? Personally, I think we've done it again!

Wow, what a fascinating report! I have to admit that this is probably something I would never have thought of. Thanks to you and all your fine developers for such a great program.

Wow - what a cool feature! And a great addition to a family book. I hope those programmers are working around the clock. Meanwhile, we can all be inspired to clean up our master location list (you're right, Geoff, about those early imports before we knew better).

I have the new Legacy Family Tree Unlocked PDF and waiting for the book.
Great job as always on making things simple to follow.
Now of course, I have to anxiously wait for the new Version 8 so I can get using the new features.

BUG On the last graph by States - When did South Africa become a state?

Larry - it still lists all locations, including other countries, but there is an option for the U.S. to include the states if desired.

Hi Geoff
Can you go down a level in countries other than the states? It would be great to be able to go to county level in the UK. If not, maybe this could be an enhancement for the future? A very interesting and unexpected report, this. As others have commented, this will look great in books.
Anne

Again, it all looks interesting and I can not wait until it come out, but is there a similiar breakdown option for non-US states - ie: Canadain Provinces & Territories; English/Wales/Scotish/Ireland Counties; and for all other countries etc.?

I think that's my favorite so far!

C. - good idea, I'll make sure it is in our enhancement request database for future consideration/implementation.

Could you also include Australian States and Territories as well?
Wendy

Wendy - you bet, I'll add that to the suggestion also.

Can't wait to actually get the new version. Will Legacy 8 still work with Telgen's Families app?

John - yes, Legacy 8 will work with the Families app.

Hopefully New Zealand will be included in the breakdown too?

Will Legacy Charting be enhanced in Version 8?

Jim - yes, there are some new charts and features in Legacy Charting 8. Maybe I'll write about them next....

Seeing that South Africa is at least in your charts ;) ; will there be a breakdown for South Africa's provinces as well? I really hope so!

I'm like an excited kid waiting for Christmas for Legacy 8!

All of the countries are included, it's just the break-down of the lower jurisdictions that is currently only available for the U.S. Regardless, even at the country level, including the U.S., they're great reports, aren't they?

Sorry pressed the send to soon. :) Was wondering if the development team and you whomever does what (hehe) would consider adding reports/graphs of ones ancestors and cousins, aunts, and uncles. Hoping for more breakdown lists/graphs (reports) of this type. I know you have list of all related people that is great feature but less focused. Example of what I hopefully am meaning: I have large families for a few generations and its a pain to find out how many cousins (to whatever degree), great aunts and great uncles, that I have and their origins, too. The grandparents is featured now (Yay!) so maybe it can be expand. Where we can choose whom you want to include in the report/graph. (Harder to explain so I will leave that be your crew to brainstorm) Maybe it could be a part of legacy charting software section if too big for the main program. All this is a suggestion/idea. Love Legacy!

Geoff, This feature will definitely be the most FUN! I've done it "by hand" before, but this will be so much better. Thanks.