Yes, John Williams and Edward Riley are the same person - recording this in Legacy Family Tree

In yesterday's webinar by Karen Clifford, "Too Many With The Same Name," one of the topics Karen addressed was the role that nicknames and alias names play in our ancestral research. It made me think of one of my end-of-line ancestors, John Williams. I shared the example of how I learned that John had an alias name of "Edward Riley." Makes perfect sense, right? This prompted the following question from Ros, one of the webinar viewers,

What made you see Edward RILEY and think "Aha! That's obviously John WILLIAMS!" It's not exactly the leap I would have made. Maybe if it had been Edward WILLIAMS, I would have thought "I wonder if he is related to John WILLIAMS?" but I would *never* have said the two names belong to the same person. What made you decide?

It was actually a pretty easy connection, but only so because I did not skip too quickly to the next generation like Karen cautioned us against.

I already had John's exact birth, marriage, death, and burial information. I even had the names of his parents. As a beginning genealogist I probably would have left him and continued researching his parents. Karen has taught that often the answers to the parents' questions lie in the records of the children, their grandchildren, or elsewhere.

Following these guidelines I attempted to search for John in every possible record - not just in vital records. I found a major breakthrough when I found him in the 1890 Veteran's schedule. 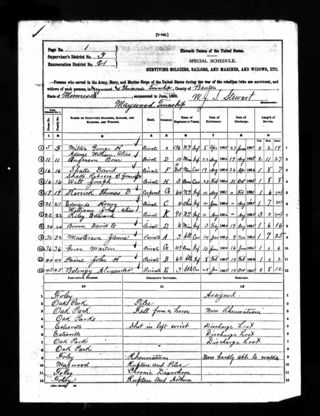 Zooming in on John's entry provided the clue I needed to break down his brick wall:

At some point and for some reason, when John enlisted to serve in the Civil War he enlisted under the name of Edward Riley. No wonder I could never locate information about John - all of his service records were under a completely different name! His 1862 enlistment using an alias could be due to the fact that he was very young. In fact, I have found more than one birth date and place for John and have recorded them as Alternate Birth events in Legacy: 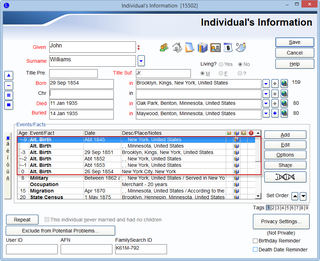 I have also recorded his alternate names in John's Alternate Names screen so I will never forget to search for him using the different variations: While reviewing this today, for the first time I made the connection that John was listed right next to his daughter's father-in-law - David Clark Brown.

How can you not love doing genealogy?

My husband's grandfather was born J C Casler. He used the alias Jack Leonard for many years. He is on a marriage list with that name in LA marrying Aveline Lebo. He is on census records as Jack Cassler. He died and was buried as J C Casler. Family lore says he was running from a stepfather whom he had borrowed a horse from and didn't return it.

Thanks for your article! I wasted many years searching only under one name. We have to keep our eyes and minds WIDE OPEN!

My husband's 2x great grandfather, Orrin Peck Townsend, also enlisted in the US Navy in the Civil War under the alias of William Johnson, which I learned from the VA pension card which had his name and alias. Now I can search for his service records. Also my grandfather's older brother, Alexander (Sandy) Briggs ran afoul of the Canadian game wardens, crossed into the US and took the alias of William Walker in about 1910. He lived the rest of his life under that name--married and buried as William Walker. I discovered his real name researching my grandfather's family in Canadian census and other local records.

My mother has two half brothers.
One change his name from Harl Leonard Staley to Edward Harold Staley. He has a living daughter who has verified this.

Another brother changed his name from Daniel Earl Staley to Earl S Daniel.