The tech behind our new family portrait

Our kids had no idea they were being photobombed by their parents. It took some pretty cool technology to pull this one off. 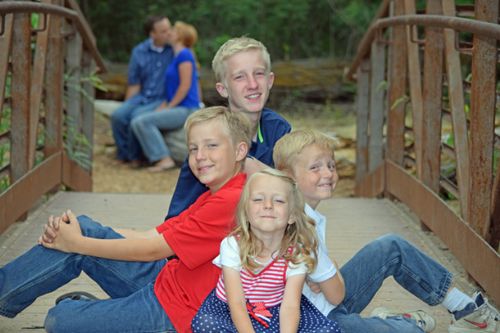 Unpacking from our recent trip to the Oregon coast, I could not find my digital camera. My Canon PowerShot G10 - not too expensive but not cheap either - had hundreds of great pictures from our vacation. Looking everywhere for it, I concluded it was stolen at a gas station on our way home. I went the next month without a camera, trying to decide what to do and hoping it might show up.

This family photograph could not have happened without the technology of my new camera and a little creativity.

First of all, a DSLR camera is not a simple point-and-shoot camera like every other camera I've ever used. While there is an "auto" mode, to take a great picture, one really needs to know a little about aperture, depth of field, shutter speed, and flash just to name a few. Although I'm a complete beginner with this kind of camera, I've learned a lot in a short time. With this camera I can focus on the subject, and have the background blurred - just like the pros do it. In this photograph, notice how the kids in front are in focus, and how the crazy couple in the background is not. This is a result of setting the aperture to just the right setting. Either that or I got lucky. This simply cannot be done with a point-and-shoot camera.

The best part of this picture had to do with the tripod, the camera's built-in wifi, and its app on my smart phone. Since it was just us, and I had nobody else to snap the pictures, I brought along my tripod. Every experience I've had with a tripod has begun with me pressing the self-timer button and hoping I can get back to the picture in time for it to snap. Since my wife and I were about 20 feet behind my children in this picture, that just was not going to happen. Using the camera's built-in wifi and its accompanying app (called WirelessMobileUtility by Nikon Corporation) for my smart phone, I was able to control everything from where I sat. On my phone I could see exactly what the camera saw. I set a delay of a couple of seconds, puckered up, and pressed the shutter release button.

I will never forget the look on my kids' faces when they saw the picture on our computer for the first time that night. They had no idea what was going on behind them. They thought this was a kids-only picture. It turned out to be one of the most memorable family portraits we've ever taken.

As an added bonus, the camera's built-in GPS embedded the latitude and longitude coordinates into the picture. The GPS wasn't perfect - some of the pictures had us standing in the middle of the Boise River, but it did a pretty good job. Below is what it looks like in Picasa with the Places panel enabled. 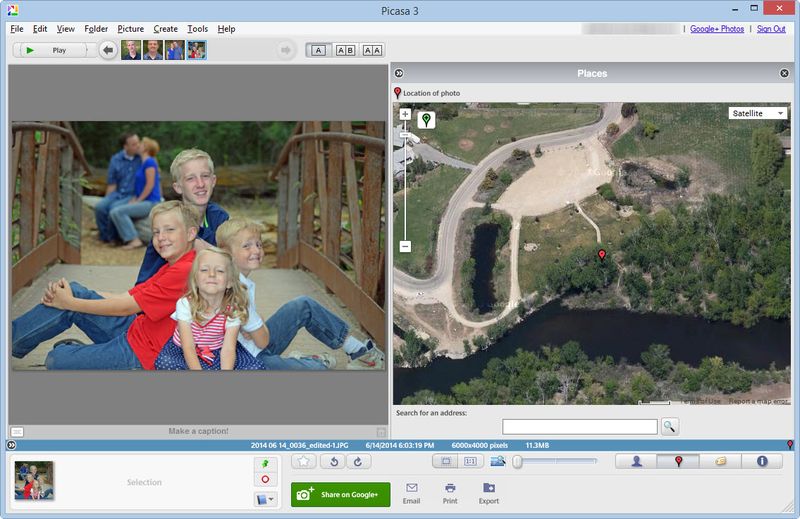 Great picture of you and the family. Love the non-traditional poise. I'll have to check out my Nikon to see f I can use the app. Suspect it's too old but I do love my Nikon.

Question? How did the camera wifi work out in the middle of nowhere?

This is my thinking. A phone has 3G or 4 if there is not wifi but the camera does not. So where did you get the wifi? Did you use a hotspot from your phone?

The camera has the built-in wifi and acts as the hotspot for the smart phone to connect to.

ah the old "honey the camera is lost, have to buy a new one" trick - great picture

Nice picture. Wish I had thought of it.

Great picture and neat idea.... I would suggest depending on how you are going to use the pictures in the future disable the GPS or scrub the meta data before sharing.

There are numerous stories of people taking pictures at their house or other non obvious location. Then the picture gets shared a few times to people that you may not know. Now those people look at the meta data and know where live of what park you take the kids to every Sunday afternoon.....

Great picture. I liked the story that went with it. I'm glad you found the original camera.

AS usual, you, your beautiful family, and your running commentary make me smile. Thank you!