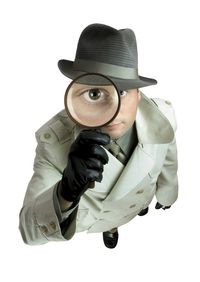 My 14-year-old son, Evan, who once proclaimed, "But Dad, I thought genealogy was boring...this is so...much...fun!" (read about it here) reacted a little differently as we did genealogy together last night.

After finding one of his ancestors in a census record, some of the information did not match up with what he had previously found. The age was off a little bit for the mother of the family. Seeing his concern, I explained to him that sometimes we find conflicting information in our research and so we need to corroborate our findings with more research. We went on to find the family in two more censuses, and we found even more conflicting information, yet the picture was becoming more clear. After, I suggested we look in yet another record to which he responded,

"So in a way, genealogy is kind of creepy?"

Laughing, I responded, "Right! We're trying to learn as much as we can about our ancestors, aren't we!"

As soon as this part of the conversation came to a close, I thought to write it down. Evan asked, "what are you doing?" I responded, "this is going in my next book."

We only stalk dead people ;)

Well yeah. That's what we are all about. The live people around us kind of wonder about what it is we do and how looking for dead people and plowing through history books can possibly be exciting. But it is!

And so far, none of our stalking victims have complained!

Yes it's amazing how many dates and names can be different in the different records but I also learned that some of my family names were pronounced in different manners due to language differences and probably the dates are off due to just poor memory or even typos. But it is fun and interesting and even looking at the headstones, yes a little creepy, but enlightening. And other than trying to find for the records the cares of the birthdate is off by a year to the date is an exact or the name is an exact it's still a fun challenge to try to sort it all out.

My husband always asks why do you like hanging out with all those dead people?!!

A lot of my research is descendant tracing, which includes contacting newly-discovered living cousins (3rd, 4th & 5th). Many of them show no particular interest in the family genealogy so yes, it sometimes does feel like stalking, albeit 2000+ people all at the same time.

My wife asks the same question; why our you so fascinated with dead people? To bring their lives and contributions to our family to life for our children to know.

But I wonder if some of our living relatives we try to track down will at some point object to our searching for them; people are so worried about identity theft, and we may be searching using non-public records. They may not know how pure our motives are!

Sometimes ages on the census are adjusted up or down. You need to look at the instructions before deciding it is wrong.

The reason the dates don't match up may be that someone falsified records. You might end up telling a cousin they are not in fact descended from a Mayflower colonist (like the UK royal family was recently found to have a break in the paternal DNA), because someone was illegitimate or born out of wedlock (before the parents were married).

E.g. it looks like my grandfather was a philanderer if not an actual bigamist, and also probably illegitimate and took his biological father's name with no paperwork. All very interesting, if a block to tracing his birth, but could be a shock to some people.

I've always referred to my visits at cemeteries as "tombstone stomping". Of course, no stomping is involved....

I have used ancestral data to figure out who my 3/4/5 cousins are, then I used Facebook to track some of them down. Some do feel like I'm a stalker and ignore my invites, but once you get a few to believe you have good intentions it's amazing how much your family expands.

I always say that the reason I love genealogy so much is that dead relatives are a lot easier to get along with than live ones.
Vera