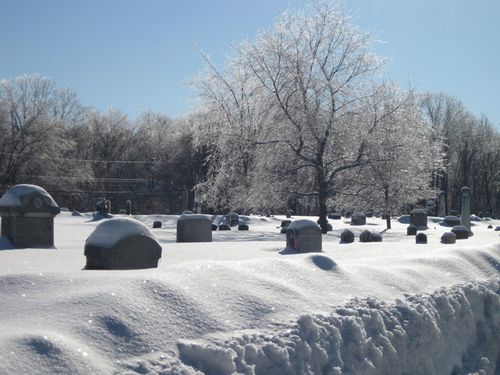 When you think of genealogy research in the Northeast what is the first thing that comes to mind? Perhaps it is Mayflower Pilgrims arriving in 1620. Or it might be Puritans arriving to the Massachusetts Bay Colony. Most likely everyone thinks of old family pedigrees and extant records. Indeed, New England is a very good place to do genealogy research.

There's one thing, however, that people tend to forget - especially people from places like Florida, California or Arizona. In New England we have winter! While New England may have some of the richest sources of genealogical research it also has some of the most precarious!

It's normal when you are going about your daily business not to consider the weather in other parts of the country. For most of the year everyone in the United States is experiencing unencumbered mobility. While we are blessed with a long history in New England, we are also perhaps not so-blessed with long winters. The New England winter has very real considerations for genealogy both on-site and for those researching from a distance.

Most folks think that snow is a beautiful distraction that we'd all like to have for Christmas. Snow in New England can be serious business. It can mean damage to your house, your car and a lack of ability to get around. One of the most common set-backs created by snow is the ability to take cemetery photos.

Consider this, it's February in Arizona and your research has just led you to discover your 4th great grandfather who lived in Marblehead, Massachusetts. Old Burial Hill in Marblehead dates to 1629. As a prominent citizen in town you think there's a pretty good chance your ancestor's gravestone may be found there. You're excited so you jump on FindAGrave.com and create a memorial for him. You then enter a photo request. A day goes by and nothing happens. Another day and nothing. Then a week. You're starting to get really frustrated because no one has answered your request.

On the flip side, here in Marblehead the local volunteers see the photo requests coming in. They shake their heads. They know that the cemetery is currently buried under 2-3 feet of snow.  If they're lucky they'll be able to access the gravestones in April.

Have you ever wanted to take a photo of your ancestor's house? Here in New England we are blessed to have many historic homes still standing. It's not uncommon to find homes from the 1600s. And, yes, winter is probably the best time of year to take photos because foliage is not obscuring the view from the street.

This winter when snow levels broke all-time recorded levels it made photographing ancestral homes more of a challenge. It's not the houses so much that are a problem. Historic homes look beautiful against a snowy landscape. The problem arises in New England where there is so much snow there is very little place to put it. Snow banks four and five feet high border roads like a wall. Stopping to take a photo becomes nearly impossible because there is no place to park. And if you're lucky enough to find a spot, you're taking your life in your hands by walking on the now narrow roads because most sidewalks are not clear.

The Holy Grail of New England research is really getting out to town halls, archives and places like the New England Historic Genealogical Society. Believe it or not, our winter impacts them as well! Not only do we have parking issues as mentioned above but this year things have been so bad that they have impacted the train schedule.

During the worst of the storms, the subway and the local commuter rail were cancelled. No train service at all. I hate to think of how all the tourists in Boston were impacted. Getting into the city is difficult too. Here it  is the middle of March and the subway and commuter rail have not yet returned to a normal level of service.  That means fewer trains and more people riding them.

The Irony of New England

It's ironic that winter provides quiet time indoors for most people to work on their family history. It does here in New England too - especially if you can do online research. But if you need help from afar with a photograph or on-site research stop for a moment and check the weather report for the northeast.

As the warmer days start to arrive and the sun shines longer, we have a glimpse of the springtime that is to come. In the meantime we still have a foot of snow on the ground in most places in eastern Massachusetts that won't melt before April and mountains of snow in parking lots that might take even longer.

The good news is your ancestors come from hardy stock. They've been through this weather before. They've been here for hundreds of years and they'll still be here when we finally dig out.

This is a nice reminder for those of us who are blessed to live in milder climates. I know I have sent a request or two in the past to cemeteries in Massachusetts and it never crossed my mind that there would be snow at the time. Marian, thank you for reminding us to be a little more sensitive to the potential harships in other geographic areas than our own. I will take that into account from now on and count my blessings that I am in Arizona and not in Massachusetts!

Ditto all of the above for Nova Scotia and the other Canadian Atlantic Provinces. And this year, 2015, has been particularly hard on us. We probably won't be able to get into some of the graveyards until May or June. Often the roads leading into them are narrow dirt roads that flood when the snow melts and your car can sink up to the axels in the mud. And that's in a good year :) Also, some cemeteries are located on land that wasn't usable for anything else so at the best of times it's rocky, swampy and it's easy to lose your footing. Many roads right now are single lane and the snow banks are 6 to 12 feet high. I highly doubt any burials are taking place right now and cemetery roads are at the bottom of the list for snow removal. Yes, it's pretty at times, but can cause hardships. Another factor for us is many cemeteries are located on the coast and the erosion that takes place in big storms isn't easy to assess until the weather improves in late spring. Thank you for writing about this Marian. I wonder what we should know about the warmer climates??

What a great article. Looking forward to someday coming in the fall of the year to enjoy the beautiful scenery and walk where my ancestors walked. These are important points to consider about doing research in New England. Thank you.

One other thing to take into consideration about New England cemetaries. Your ancestor may well be buried in a particular place. But there may be no gravestone. There are several reasons for this. Gravestones weather, especially some of the older ones. Many of the very earliest were made of wood and simply didn't survive. Frost and hard freezes can damage stones beyond recognition. And, sad to say, New England is not free of the kind of mindless vandalism that results in damaged gravestones, or of the peculiar urge that sometimes results in stolen gravestones. A neighbor found several such in the foundation of the barn he was repairing (he managed to discover where they belong and returned them, but I doubt that usually happens).

Sometimes cemetery records can indicate where a grave had been located and verify the occupant. But the weather can also result in water damage to those records, or they may be lost as churches and cemetery associations disband, or in fires, or just lost. I wouldn't give up, though. Town records and local history associations can often fill in the gaps, and old church records were often turned over to a local repository. New Englanders were compulsive record-keepers from the beginning, at every level. Increasingly even obscure records are being identified and indexed; many have already been digitized. But if you can't find what you are looking for, you can do worse than plan a road trip during our better seasons, and visit the little historical societies and town offices where your ancestors lived. Sometimes you get lucky (and the scenery is outstanding).

Ah, Marian, as much as I love Northern Virginia, that's exactly why my husband & I retired to Florida -- no snow banks, no sleet, no freezing rain.... Mind you, it does get really really hot in the summer, but then again, that's why we have A/C & swimming pools :-)

These are things that we don't really think about and can't relate to further south. Snow is rather infrequent here and rarely lasts more than a few days before melting. Several years ago, a cousin told me of his sister-in-law's death up north in mid-winter. I asked when the funeral would be, and he said, "Oh, not until the spring thaw." Now, THAT was something I'd never considered! I know my ancestors in a colder climate would've had the same issue with frozen ground, and unlike down south, we can't assume that burial was the next day. Thanks for the interesting article and reminder of the obstacles faced by those living in beautiful-but-frozen places!