Putting a Face on Your Ancestors 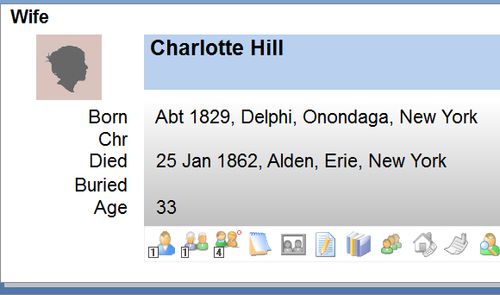 How do you react to the shadow people? That's what I call the pink and blue profile silhouettes in most family history software programs. They are place holders for real photos but when you don't have photos of your ancestors they just become shadow people.

Personally, I ignore the shadow people. I don't even see them anymore. I don't want to get my hopes up so I just pretend they don't exist. Until recently.

I have been working hard on finding my great great grandmother, Charlotte Hill who died at age 33 in 1862. Discovering the location of her gravestone was a great thrill. This is likely the closest I'll come to a physical connection with her. There may be a extant photograph of her somewhere but whether her name was written on the back or whether a descendant has the photo are two things I'll likely never know.

Since I spent so much time researching Charlotte I inevitably spent quite a bit of time researching her husband, William Chandler Learned, who lived a long life, and her two children. In addition I also researched William's second and third wives and the children produced from those marriages.

My great-grandmother, Clara (Charlotte's daughter), was only 9 years old when William married his third wife, Adda Setchel, in 1868. Adda lived to the ripe old age 86. She was part of Clara's life for 60 years before her death and it's probably safe to say that she was the only mother Clara ever knew.

At first, I hadn't really considered researching the other wives but I'm glad I changed my mind because it changed everything for me.

While researching the entire family I discovered that Adda and her daughter, Abbie liked to travel. I came across ship passenger lists from their trips to Europe. The real gold came when I found them in the US Passport Applications, 1795-1925 database on Ancestry.com. The early passports, from 1914 and earlier, may contain descriptions of our ancestors. You'll find information about age, stature, eye color, hair color, complexion and the shape of their forehead, nose, mouth, chin and face. What a wonderful surprise to find details about how an ancestor looked!

If you are lucky enough to have ancestors who traveled abroad between 1915 and 1925 you will be rewarded with an actual photograph of your ancestor! From this database I discovered photos of Adda Setchel and her daughter Abbie Learned.

I already had some photos of my great-grandmother, Clara. Since she and Abbie were half sisters it was fun to compare their features. I tried to imagine which traits Clara and Abbie both inherited from their paternal Learned side and which they got from their respective mothers. Abbie had a brother, William Setchel Learned, and I had a photo of him as well. Quite a handsome chap!

Now with photos of 3 out of 5 siblings and one mother I was ready to start replacing the shadow people in my family tree!

What a treat it is to look at a pedigree chart and see actual faces instead of silhouettes! This transformation has encouraged me to seek out more images of my ancestors. It may be difficult but I will work hard to find more photos.

You can try the Passport Applications database to find photos of your ancestors. Be aware, however, that not everyone's ancestors will be included. Your ancestors needed to be wealthy enough to travel abroad and to pay for the passport application fee. But don't discount your ancestors, took a look anyway. Your ancestors may just yet surprise you!

If you have another unusual public source for ancestor photos please be sure to let us all know. It would be wonderful to convert as many silhouettes as possible to actual faces. 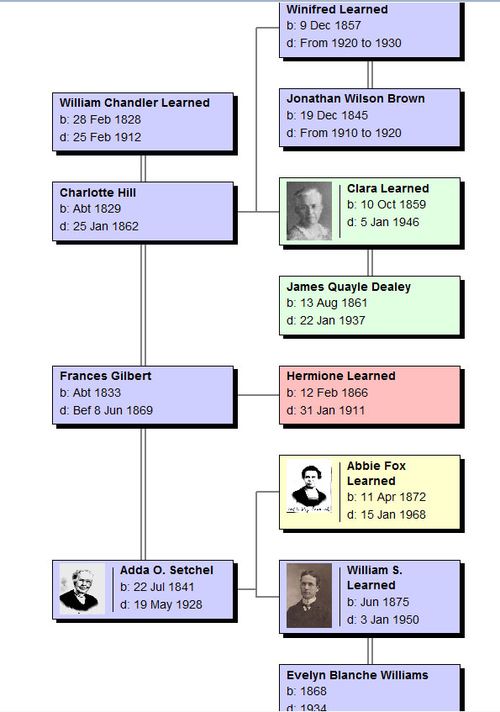 Fun read, thanks. I've been wondering whether mug shot software like the police uses would work for ancestors of whom I have a physical description (Dutch military records often include a description that tells you somebody has a blue eyes, light brown hair, a wide nose, broad face, thin lips and a cleft chin, for example). I would not use these reconstructed faces in my real tree but the images could be a nice shorthand to see how certain traits run in the family. I would copy a branch to a separate tree and put in the reconstructed mug shots. How cool would that be?

You can expand on Charlotte's appearance using social history research, learning how women wore their hair,clothes, jewellery at the time. Their ethnicity, religion, class status, employment, etc. can all help to paint a picture where there is none. I encourage this with my family history writers to help them describe ancestors they have no picture of, also consider creating a collage, just one of the exercises I encourage them to do.

Thanks Lynn! That's a great idea!

I have the opposite problem -- I've collected many ancestor photos over the years, have no one in the family interested in anything along that line and I'm approaching my end of time. Before they are all thrown out, I have started loading all my photos onto Ancient Faces so maybe some one someday will locate them. They add so much to an ancestor!!

Great story! Thank you for posting it.

Marian Pierre-Louis - donate your photos to a state or university library.

I have to have faces on my people..it makes them that much more real. I love when I can find photos in my research. Hopefully, someday I'll have more than half of them.

Hello Moi Mid, sorry you feel this way, but I'm sure someone will very much appreciate your efforts at some future date. Thanks Marian for your article, and to those who have put forward suggestions. It's great to share your ideas.

Shadow people... perfect name for them. Unfortunately, most of mine are. I so appreciate the suggestions for ways to fill in some of the details that help to give a "picture". One thing I have already discovered (just as you did) is that if one can pin down a name, date, and place, and can confirm through evidence that that person is an ancestor, that can lead to clues about other members of the family. And sometimes THAT can lead to a photo of an ancestor. Not too long ago, following a collatoral line to help locate the family in space, I stumbled across a page of photos someone had posted, including an otherwise unidentified man who happened to have the same name as one of my gggfathers. Indeed, once I did some sleuthing, he turned out to be, though I still have little info about his past.

I have a set of family photos that had been Xeroxed decades ago, when the process was high contrast and provided little detail. Most are inadequately labeled("Uncle Bud") and some not at all. I plan to set aside some time to do nothing but image searches, hoping that some distant cousin will have posted the originals, and hoping these partial images will pull up something.

Marian--don't give up on your photos. One of your children may be interested some day; give them some time. I didn't even start getting interested, really, until my own boys were in high school, and my sister passed on a huge box of old photos to me about 15 years after that which I'm still poring over. Thank you so much for your article.

My shadow people are replaced with a tombstone picture or a document image. This makes me feel that I'm not ignoring them. As you say that ancestor portrait may never come to my attention.

My shadow people are also replaced with burial marker pictures, or their signatures - anything that represents them. If I could draw, I would draw what I imagine they look like, in period costume, maybe like Sunbonnet Sue in quilts, with the face covered!

Congratulations on finding the photos. I know how exciting that is. I live a 5 hr drive from most of my relatives so rarely see my second cousins. The daughter of one of them has a tree on Ancestry. I contacted her to ask if she had any photos of our family, especially of my 2nd great-grandfather. She said that she had not seen any photos of him. Last fall, about a year after this communication, she posted a picture on his profile on her tree of a couple that I took to be my 2nd great-grandparents. I guess that we just have to keep checking since some of our communications will not bear fruit. I am thrilled to have this picture.