News Home Legacy Webinars New to Legacy? Store
5 Online Places to Start Your Southern Genealogy Research
Got Female Ancestors? Register for Gena Philibert-Ortega's webinar to learn how to find them

Have You Used this Unusual Genealogy Resource?

Funeral and Memorial Cards are often overlooked as a genealogy resource. They can be a treasure trove for the genealogist as they usually contain detailed information on the deceased person, such as birth and death dates, funeral location and burial location. Sometimes a memorial photo of the departed loved one is also found on the card.

During the 17th and 18th centuries, small memorial cards or invitations were often sent to inform friends and neighbours that someone had died. These cards were seen as an invitation to a funeral as well as a funeral notice. If the deceased was someone of great importance, the card usually had to be shown in order to attend the funeral.  Funeral and Memorial cards are a genealogical treasure.

Funeral Cards in the 19th Century

In Victorian times (ca 1837-1901) mourning customs were comprised of rituals and strict rules of etiquette and these were rigidly followed by most individuals. Mourning and funeral rituals were quite strict and anyone who did not wish to be ostracized tried to follow the social customs. This was the time period when mourning jewellery became popular and custom jewellery containing a lock of the deceased person's hair was often made for a widow to wear. 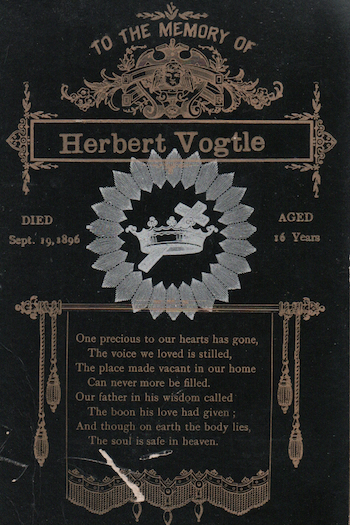 Funeral cards were very popular in the 19th Century. After a loved one died, a family member was expected to let others know of the time and date of the funeral. That is where Funeral Cards came in.

The deceased's love ones could order from dozens of styles of cards and have them imprinted with the deceased's name, date of birth and death, age and when and where the funeral was to be held. Often a standard verse was included.

Sometimes there was a photo of the deceased or an image such as an angel if the card was for a child. These cards were usually 4x6 inches and viewed vertically. A commonly used colour was black with gold lettering. A child's Funeral Card was usually white. 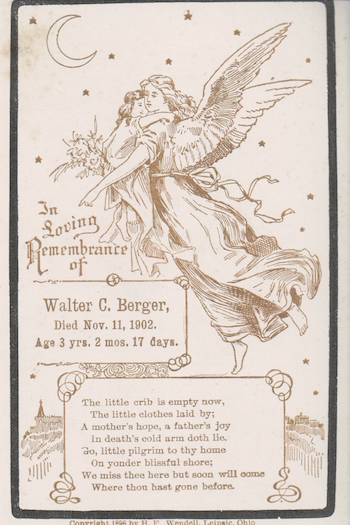 After printing, funeral cards were sent or given to family members, friends, and the surrounding community. Recipients of a funeral card were expected to attend the funeral or risk offending family members. Conversely, those who did not receive an invitation would have been insulted, whether it was intentional or an oversight.

Funeral cards were sometimes kept as a memento of a person's passing. They often turn up in antique stores, auctions, flea markets, or attics where they have been stored and forgotten.

Memorial cards did not have the same purpose as a funeral card. These small cards were sent out after the funeral and often contained more details of the burial location as well as a memorial to the deceased. Usually the name of the person as well as birth and death dates and location of death were included. These cards were usually 3 x 4 1/2 inches and viewed horizontally. They often had elaborate mortuary designs. Often a thick black border was used on Memorial Cards. If there was enough room a poem or verse might be added. 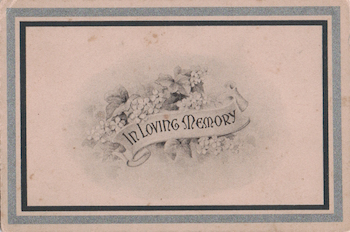 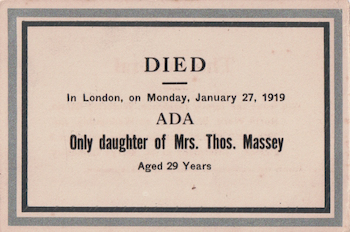 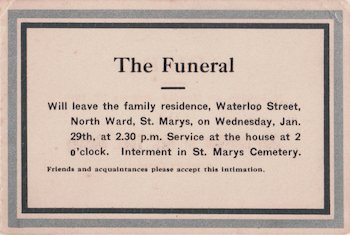 By the 20th Century these Memorial and Funeral cards were out of style and Victorian rules of etiquette were rapidly changing. The cards evolved into other designs, usually a folded 4-sided vertical Memorial Card given out at the Funeral. A photo of the deceased and a great deal of genealogical information was usually included.

Today's Memorial or Funeral Cards can come in a variety of designs and shapes. They might be bookmarks, or a card similar to a Sympathy card. Families can have their card of choice printed through the Funeral Home or a Printing House. Often a photo of the deceased or of something of significance to that person is included. A poem or religious verse is often added. Some Memorial cards are religious in design and will have religious symbols and relevant religious or biblical verses included.

Genealogists can look for Funeral and Memorial cards at flea markets, in Antique stores and on E-Bay. There is also a large collection of these cards on the AncestorsAtRest website. They are free to search and view at the links below:

My mother & her mother tucked funeral cards into their Bibles. It is nice to have those today.

That's wonderful Colleen. My husband has some that were handed down in the family and two that he bought at estate auctions. A great treasure

The West Valley Genealogical Society, 12222 N. 111th Avenue, Youngtown, AZ 85363
has been collecting Memorial Folders & Cards for 10 years. We have approximately
3,000 of them at present.
We also have obituaries for the northwest valley of Phoenix, AZ which includes
Sun City, Sun City West, Surprise, Goodyear, Litchfield Park, Tolleson, Avondale,
Waddell, Wittman, and even some from Wickenburg. Many of these people were
from the northern states and moved south and died here. We also have 150,000
obituaries which we have been collecting for 17 years. See our website at www.azwvgs.org.