Answer: In Ireland, France, Italy, Spain, Russia, Germany, Poland and the Czech Republic, respectively, all are the equivalent of John Smith. [Source: http://archiver.rootsweb.ancestry.com/th/read/ROOTS/2004-11/1100278847]

This Q&A is an excellent reinforcer of the notion that as genealogists we need to look beyond the familiar. We need to think outside the box. Coming from a different culture we might assume if we find an ancestor named Janos Kovacs that it's an unusual name. But that may not be the case!

I recently learned that my maiden name of McGinnis is one of the most common names in Ireland. My son is a Schulze. I thought that was an unusual name but in Germany it’s very commonplace.

Tips to Help You Navigate the Confusing Maze of Name Variations

1. Don’t be confused by spelling. How often have you found a name in a census or other genealogy record, that was close to the name you were seeking but not exactly the same? My Peer ancestors have also had their name recorded as Pier, Pear, Peare and Pierre. Don't discard a record with a variant spelling of your name! Remember spelling didn't "count” and it was not consistent before the early 1900s. Many of our ancestors had little or no schooling and often they could not write their own names. That meant they could not verify that the way their name was recorded was in fact correct.

2. Foreign accents also confused English speaking clerks and that is when phonetics kicked in with clerks and census takers recording what they heard. If you are puzzled by a document, say the name out loud. Does it sound like the name you are looking for? Perhaps it is!

3. The surname you found may be the result of an error in transcribing or indexing. Look for the original document to verify what was written. Handwriting and formation of letters changed over the centuries. Early forms of the letter “S” can be mistaken for an “L” and vice versa. I once attempted in vain to explain to a client that her ancestor's name was not Lamuel but Samuel.

The double “ss” in a surname was frequently written in a way that we read it as “fs. My husband's Massey ancestors are frequently found erroneously indexed as Mafsey.

4. Look at other clues such as spouse, children, ages, occupation, location, etc. Could the individual you found be your ancestor?

5. Remember that your ancestor may have deliberately changed his name or may be using an abbreviated form of it. It might also be a nickname that has become the surname in use.

Van Valkenburg to Vollick and Follick: My great-grandmother’s surname was Vollick. Often it was recorded as Follick. Other variations I found in documents are Valck, Volk, Valic, Falic, Folic, Falk, and Falck. Why "V" and "F" interchangeably? Because the Dutch-German "V" can sound like "F" to English speaker's ears. Remember that whoever was writing out that original record may have been an English speaking person listening to a different accent. He would write what he heard, in other words, phonetic spelling was the key to recording documents. 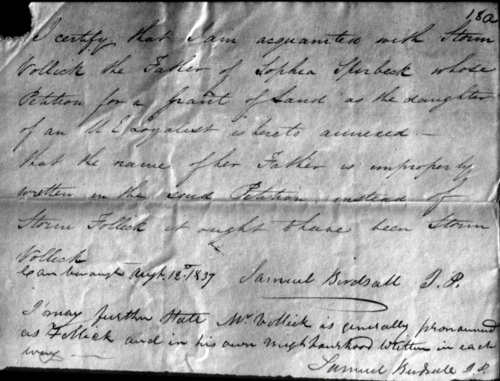 As I methodically researched back from my last known Vollick ancestor I discovered to my surprise that his birth surname was Van Valkenburg! He apparently was known by his nickname of Valk which over time became Vollick. How would I ever have found my ancestor if I hadn't kept an open mind and looked at other clues? And much to my initial surprise, Van Valkenburg is not an unusual name.

So be aware that bad handwriting, inability to spell, accents, and other events can change an ancestor's name - and don't be too quick to assume, for example, that Leonard-Tremi Le Roy is not your 5th great grandfather Jonas Larroway. If both men have the same wives and children, same birth year, same place of birth, and siblings who are identical, you can be pretty sure that you've found the right ancestor in the confusing maze of names in genealogy research.

The University of Pittsburgh’s Slovak Studies Program at http://www.pitt.edu/~votruba/qsonhist/lastnamesslovakiahungary.html

Dutch Patronymics of the 1600s at http://www.olivetreegenealogy.com/nn/pat.shtml

Your example of Leonard-Tremi LeRoy was timely, as I keep digging for more information on this ancestor - his granddaughter Sarah married Dirk Terwilliger 20 Sep 1754.

As for spelling - KUHN is another common surname, from Germany. My KUHN ancestors from Wurrtemberg are challenging to find.
Thanks for the great post.
- Celia

Kuhn is a tricky one, since it can be mis-spelled so many ways (Coon, Koon, Cuhn, etc) Keep going, one day you will solve the mystery.

I spent years looking for Bayeseler or Bayes Eli Ward. When I found him, eventually, with a suggestion from another researcher, I found his name was Barzallai. Sounds the same when you say it! Also he was Christened Ward by mistake. His Father's name was Warn(e). To add to the confusion I was seaching Suffolk but he was born in Kent where his father was stationed while in the Suffolk Militia.
But never give up!!!!
Carolyn

Love hearing a success story! Thanks for sharing Carolyn

Indeed! My Coverdill line's spelling was apparently written down 'as heard' by a clerk or scribe due to the original spelling of Coverdale (from the dale / valley of the river Cover in England) sounding like Coverdill or Coverdell when spoken with a Yorkshire accent. Nearly all of our ancestors enumerated in the 1800 US Federal Census (in Delaware) were spelled Coverdill, yet 10 years later, those same family heads and a few of their sons were predominantly spelled Coverdale. We now are using DNA to try to re-link the three differently spelled branches of what may actually be a single family.

First names vary even more frequently - one enlistee in the Union Army of the Civil War had his given name (probably Pernell) spelled 4 different ways during his 2 1/2 years of service in a single unit...most written by what appears to be a single hand!

To an engineer of many years experience, such variability is maddening...but a quirk that I have to accept to be able to effectively perform genealogical research. Loads of fun!

Interesting story, Cary. Isn't it fascinating how surnames changed over the centuries?

I've had published several articles on this theme. What has changed in the pasr 20 years is that many, but not all, genealogy search engines allow wildcards. Ancestry, FamilySearch, fultonhistory and, due in great part to my persistence, more recently, Mocavo are among the sites that permit wildcards. And, as important, multiple wildcards not requiring a name that starts with one or two letters preceding the wildcard. My surname began in Austria as Vachenlueger and, today, there are Vornlocker, Vornlocher, Farnlacher and Farnlucher families descended from that surname. I use V*rnl*r or F*rnl*r for most of my searches. A proximity search is also a great search help. I encourage all genealogists to write/call those sites, particularly those who charge for their services, to permit multiple wildcards. In my opinion, they are not giving you your moniey's worth if they don't.

My married surname is Hardess and I have recently realized that the old-style cursive H can often look like cursive Fl and probably vice-versa. I have now found records of Flardess which are relevant to my family-tree. I suspect some have been caused by OCR (optical character recognition) errors.

My surname of Hawks, is frequently spelt as Hawke, Hawkes and other variations. My ancestor George Llewell is a puzzle within the family it is spelt with one L or two Ls- family stories have him as Welsh, French maybe English. My maiden name of Smith was originally spelled as Smyth.

Good catch, Jennifer! I don't know if I would have thought of that H/Fl confusion. It pays to think outside the box doesn't it?

Yes, there are many many spelling variations on surnames. Johnston, Johnstone, Johnson, Johnson for example. It is something we all need to be aware of and on the alert for when researching. Thanks for sharing your story with us.

Just imagine what Ohio clerks and enumerators did to "Grunschalski"!

Jay, I feel your pain! And that is why I love (and recommend) wildcards for anyone searching an unusual surname. In fact, wildcards are your friend even if you have a seemingly simple surname such as SMITH. Wildcards pick up SMITHE, SMYTH, SMYTHE for example