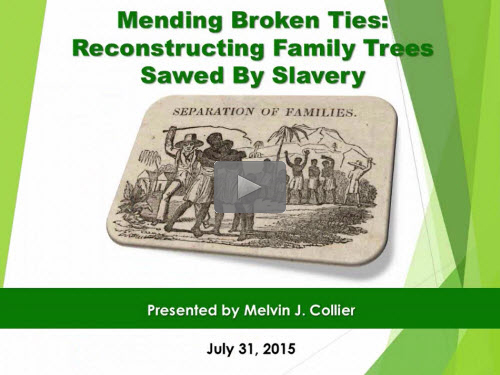 "We are on our ancestors's time" is how Melvin Collier summed up his inspiring webinar today. It has been 150 years since the beginning of freedom for all Americans. We are celebrating by hosting the Freedom Webinar Series. Today's webinar, the third in the series, was presented by author and researcher, Melvin J. Collier. Its recording is now available to view for free at www.FamilyTreeWebinars.com for a limited time. Some great comments:

If you could not make it to the live event or just want to watch it again, the 1 hour 34 minute recording of "Mending Broken Ties: Reconstructing Family Trees Sawed by Slavery" is now available to view in our webinar library for free for a limited time. Or watch it at your convenience with an annual or monthly webinar membership.

Use webinar coupon code - freedom2 - for 10% off anything at www.FamilyTreeWebinars.com or www.LegacyFamilyTreeStore.com, valid through Tuesday, August 4, 2015. 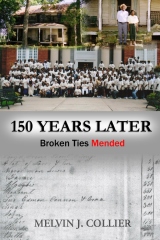 150 Years Later is a unique story of DISCOVERY, TRIUMPH, and CELEBRATION. No other book unravels a historical mystery that led to an unprecedented family reunion. This book takes readers on a mouth-dropping quest that mended ties that were broken during slavery.

In 1859 near Abbeville, South Carolina, 12-year-old Bill Reed was forever separated from his family. His father was sold away, and his mother, grandmother, and other family members were all taken away from the state soon afterwards. Waving goodbye to them, young Bill would never lay eyes on them ever again. He left South Carolina in 1866, shortly after he was emancipated, and moved to northern Mississippi after he was told that Mississippi was the "land of milk and honey with fat pigs running around with apples in their mouths." He died near Senatobia in 1937, at the age of 91, never learning that his family had been within 75 miles away from him, also in northern Mississippi.

150 Years Later is a riveting story of discovery that chronicles Collier's relentless journey of unearthing his great-grandfather Bill's mysterious history, finding his family's whereabouts and their living descendants, and breaking down barriers to mend the broken ties in an emotional reunion in 2009 - 150 years later.

The involuntary break-up of families during slavery due to selling and other means was very common. However, the discovery of those lost branches and the reuniting of the descendants after 150 years is uncommon. This is what makes 150 Years Later very captivating and uplifting.