My Grandfather was a Sea Captain: Researching Maritime Ancestors

Learning about seafaring ancestors can prove to be as exciting as the adventures of many who crossed oceans to destinations around the world. My great, great, grandfather, Owen O’Neill, was born off the coast of South America aboard his Irish father’s frigate. After courting his wife in Boston, Owen sailed his family to California. From the 1850s until his death in 1871, he piloted a cargo ship that traversed daily from San Francisco to Belmont, California. 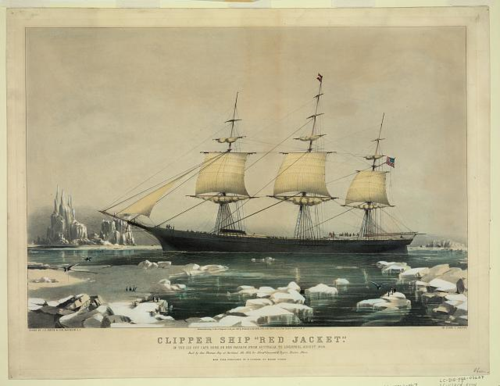 Many men of his time living near ports were employed in the maritime industries. The importance of the maritime industry led to the creation of records that, in many cases, have discoveries waiting for genealogists. With the right know-how, any researcher can re-tell the tale of their sea captain.

Many resources exist at the National Archives that remain only partially digitized. The Act of 1789 by the United States Government mandated that private seagoing vessels be officially recorded by the government. As a result, 100 district offices throughout the country were established for the agency of the U.S. Customs Collection Service. The U.S. Customs Service became responsible for recording information on vessels and their contents. Ships arriving at port were directed to the local customhouse. The customhouse was operated by the collector and his subordinate officers who collected details on the arriving ships. Among the records produced at the customhouse are:

Records of United States customhouses are located in National Archives Record Group 36, Records of the U.S. Customs Service. There are collections of passenger and crew lists that are digitized and searchable on Ancestry. These lists mostly come from Record Group 85, Bureau of Immigration. More federal records are accessible to researchers online if the seafaring ancestor in question served in the Navy.

Researchers new to these records will come across unusual terms. Here are definitions of some important terms to help your research:

Genealogists should prepare in advance for searching these records. Many are not indexed and will require looking for multiple boxes of archival material. You will have greater success if you know name of the ship and the home port. Historical newspapers may contain information on your ship-owning ancestor. Court and probate records are also worth checking because boats are important property. Save time by confirming that your ancestor had a maritime job by checking the US Federal Census 1850 or later to determine your ancestor's occupation.

Finding Maritime ancestors can be a great surprise, but learning details about their lives is even better. If someone asked me to research the career of Captain Joseph Peabody of Salem, Massachusetts, I would use Records of The Customs Service in the District of Salem and Beverly to find what ships he mastered, where he imported goods, whom he worked with, and so many great details that would otherwise be overlooked.

Do you have any maritime ancestors in your family history? Share your ancestor's maritime stories here!

For anyone who has Canadian or British seaman ancestors, please consult the Maritime History Archive at Memorial University in St. John's Newfoundland, Canada. they have a wealth of information, not only of Newfoundland and Canadian seamen, but British as well. They have ship's logs, captains' records and much more. I found a wealth of information about my wife's great-grandfather who was a Scottish sea captain. I found many logs, but most interesting I learned WHY he left the UK and immigrated to Canada!

Some of or "a number" of early immigrants "just show up" My immigrant ancestor John Wadham arrived I think, at Wethersfield about 1638 and bought land .probably returning to England. His name is referred to in a deed dated 6 July 1643 where the seller says he bought the property from "Wadom". Having attacked this brick wall for forty years, my latest tack is that he might have been delivered by a fishing vessel or supply ship from Bishop or Poole England. I have Wadham mariners in both places, but which John Wadham is our boy. I have searched for any mention of the English fishing villages. but no records. Any Ideas?
Charlie Wadhams

Thank you for the tip Robert. Charlie, the British National Archives mariner records go back to 1710, which unfortunately is a little later than your ancestor was working at sea. I would try contacting the New England Historic Genealogical Society, National Maritime Museum (http://www.rmg.co.uk/researchers), and maybe the local historical society for those port cities in England.