How many of us overlook searching for an ancestor in land records? Sometimes genealogists don’t realize how much information can be found in a land record. Originally all land in Upper Canada (later called Canada West, then Ontario) belonged to the Crown. Although there were small areas of settlement in 1763 after the British took over, major settlement of Upper Canada began in 1783 and utilized Crown Grants. Many early settlers, both military and civilian, submitted land petitions to the Governor in order to obtain Crown land.

The following steps were involved in a settler acquiring land in Upper Canada:

Until 1826 free land grants were available to all settlers, to government favourites, and to United Empire Loyalist (UEL) children. In 1826 these free grants were abolished except for Loyalist grants and soldiers, thus anyone wanting Crown land had to buy it.

There were two types of land petitions: 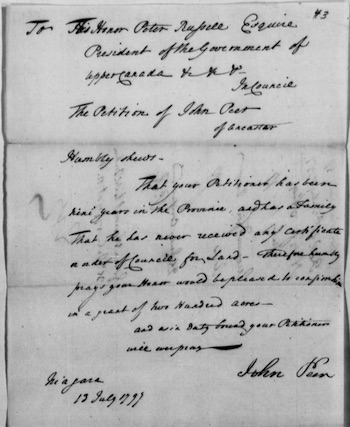 Settlers could also buy lands from the Canada Company, a private company owning all of the Huron District. These records are held at the Archives of Ontario. All land sales after the initial Crown grant were registered with local land registry offices.

Procedures for granting Crown Land changed constantly but could involve:

In 1797, the government of Upper Canada (now Ontario) established the Heir and Devisee Commission to clarify land titles for settlers on unpatented land. If your ancestor was living in Upper Canada around this time, there is a chance that you might find them referenced in this collection. Records can include: affidavits, bonds, location certificates, powers of attorney, orders-in-council, copies of wills, mortgages, deeds of sale, and testimonial letters. The digitized films are challenging to search but for a corrected list of online digitized film numbers with their contents, see Olive Tree Genealogy’s Heir & Devisee Commission Microfilm Listings. 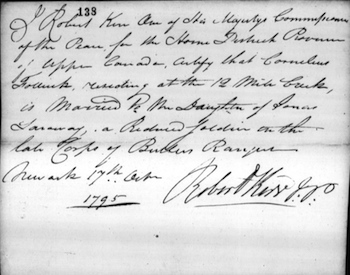 The Abstract Indexes to Deeds are the indexed record of every transaction on a plot of land from Crown ownership to the present day. Using the Abstract Indexes to Deeds you can check for every instance of your name of interest on that parcel of land. By referring to the date and Instrument Number found with each transaction, you can look up the complete record. You may find a will (many wills are filed in the Land Records Offices) or other important genealogical information or document.

Assessment and Tax Records contain location of an individual's land. There are some very early assessment records, but each area in Ontario has different surviving records, so you must check for the county or township of interest to you.

Township Papers deal mostly with the original locatees, but may contain other pre-patent records. Some petitions for land can be found in the Township Papers. This miscellaneous group of land-related records have been arranged by township name, then by concession and lot or by town name and lot number. Under any lot which has documents, researchers may find the following: copies of orders-in-council; copies of location certificates and location tickets; copies of assignments; certificates verifying the completion of settlement duties; copies of receipt; copies of descriptions; and copies of patents; and copies of incoming correspondence. See Finding Aid to Township Papers

Other Resources for Land Records