Did My Ancestor's Farm Prosper or Fail?

Many of your ancestors were farmers and as such would have been recorded in the agricultural census records. The agricultural schedule was kept from 1850-1910. Unfortunately, not all of these schedules survived.  The 1890 schedule was lost due to the effects of the fire that destroyed the 1890 population census. The agricultural schedule of 1900 and 1910 were destroyed by congressional order.  The surviving Agricultural census records are for the years 1850, 1860, 1870 and 1880.  (These can be found on Ancestry.com. Ancestry.com can frequently be accessed for free at your local library or your local Family History Center.) 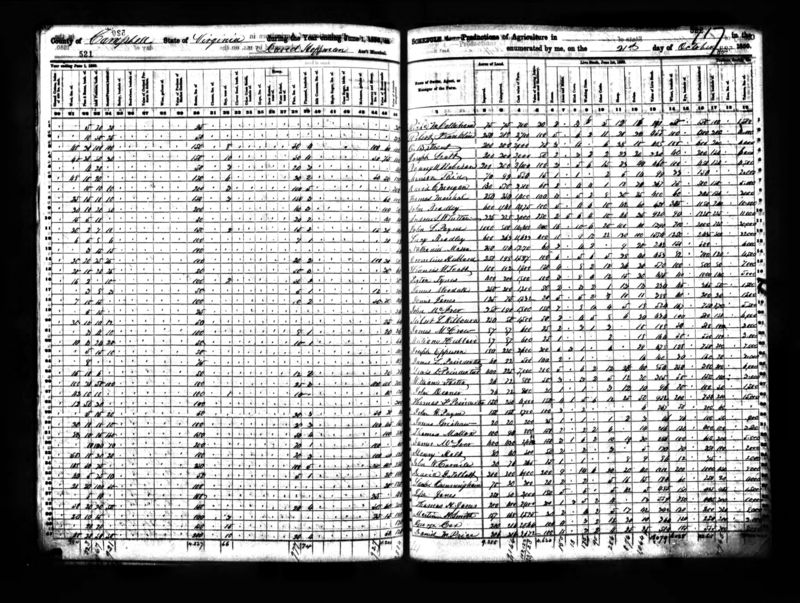 Information Found on the Agricultural Schedule

Let’s take a closer look at the 1850 Agricultural Schedule 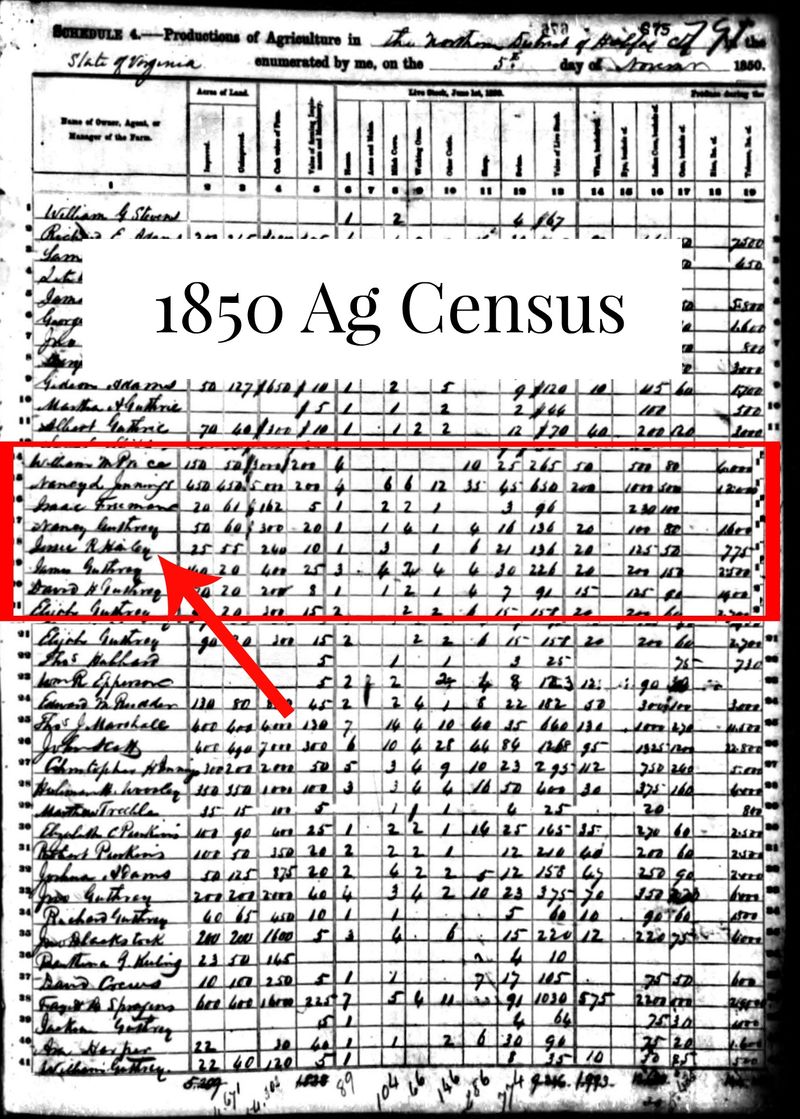 Jesse R Haley (~1802-1869) lived in Halifax County, Virginia. In 1850 Jesse owned his own farm consisting of 80 acres of land.  25 acres of land were improved and 55 acres were unimproved.  The land was valued at $240. Farming implements and equipment were valued at $10.  His livestock included 1 horse, 3 milk cows, 1 other cattle, 6 sheep and 22 swine. The livestock is valued at $136.  Jesse Haley grew wheat, indian corn, tobacco, oats, peas, irish potatoes and sweet potatoes.  The farm also produced 30 pounds of butter.

Jesse R Haley was still living in Halifax County, Virginia on the same land next door to Nancy Tribble.  He now has 80 acres (40 improved and 40 unimproved) worth $600. His farm equipment and implements are worth $40.  He owns one horse, two milk cows, 2 working oxen, 3 other cattle, 22 sheep and 8 swine. His livestock is valued at $234. He grew indian corn, oats and tobacco valued at $985. He also grew peas, irish potatoes and produced 60 pounds of butter.

Between 1850 and 1860, Jesse Haley’s economic situation improved. He acquired more livestock and switched to predominantly sheep in 1860 as compared to swine in 1850. More milk cows led to an increase in butter production.

Unfortunately, Jesse Haley died in 1869, so the value of his land and farm after the Civil War in not known. Like others around him, it is almost certain the value of his farm was less than in 1860.

When searching your farming southern ancestors, be sure to look beyond the population census records.  The Agricultural Schedules of the United States censuses will provide you with valuable information and clues about your ancestor leading to new research possibilities.

Lisa Lisson is a genealogist, blogger and Etsy-prenuer who writes about her never-ending pursuit of ancestors, the “how” of genealogy research and the importance of sharing genealogy research with our families. Specializing in North Carolina and southern Virginia research, she also provides genealogical research services to clients. You can find Lisa online at Lisa Lisson.com.

Good article but could go a few steps farther.
Anyone looking researching Southern U.S. ancestors in the middle 1800s should review at least 3 documents; the U.S. Census record, the Non-Pop Agriculture schedule and the U.S. Slave schedule to correlate the values given for real estate property and personal property. In the 1850 and 1860 Censuses and those same years for the Slave schedules will give values for personal property that are almost always values declared for slaves that are owned by that person. It's just the facts of the time. All of this information can give you the story of how big a farm was owned, how much was cultivated (improved), what crops were raised, animals owned and then you can relate numbers of slaves used to work on that farm. Again, just the facts.

How do you access the Agricultural Schedule from Ancestry.com?

The correct spelling is milch cow.

I am also interested in how you access the records....I am on World Ancestry.....but see no link to an Agricultural Schedule

Their was a special 1885 census in Nebraska, which contained special information about farm acereage in specific crops, # of and kind of farm animals on the farms. This was accompanied by data on family members similar to regular decennial census information. I believe some other Midwestern states had one or more similar censuses.

You can find the Selected U.S. Federal Census Non-Population Schedules, 1850-1880 at http://search.ancestry.com/search/db.aspx?dbid=1276

I wonder how it is that I did not know of the Farm Schedule. Or maybe I did and just didn't make the connection. At any rate, I can see that a trip to the library is in order. Almost all of my 19th century ancestors were farmers, and this looks to give me a much closer look at their lives.

(BTW, Martha, one of my grandmothers said "milk cow". The other used "milk cow". I got curious and looked them up. Milch is an adjective derived from milk. Milk is a verb, a noun, an adjective, and the name of a river somewhere. Apparently the difference is that milch refers to an animal bred to produce milk. Are there milch goats and milch sheep? I live in New England and we only have milk animals. The grandmother who said milch cow was southern in derivation; the family of the other was largely originally New England. They lived only miles from one another in the high west for much of their lives, but never met until my parents got married. Go figure.)

Oops, I meant one said milch, the other milk. It's hot and muggy today, does that count?