Find Your Ancestor on Ships Passenger Lists to Canada After 1865

Genealogists are often looking for our immigrant ancestor's arrival in North America. Finding an ancestor on a ship's passenger list depends on the country of departure and the country of arrival.  Most countries did not keep outbound lists so genealogists must find out what lists survived in the arrival country and where they are held.

In 1803, the British Parliament enacted legislation to regulate vessels carrying emigrants to North America. The master of vessel was required to prepare a list of passengers and to deposit it at the port of departure.

If your ancestor arrived in Canada after 1865 you are in luck. Library and Archives Canada has Canadian ships passenger lists from 1865 to 1935 online. The lists contain information on each passenger such as name, age, country of origin, occupation and intended destination. Formats differ by years and unfortunately there is little consistency.

You can also search the Passenger Lists and Border Entries, 1925-1935 database on Library and Archives Canada.  This is a series of old nominal indexes for the period 1925 to 1935. They provide the volumes and page numbers on which the names of Canadian immigrants appear in the passenger lists. The indexes generally do not include the names of returning Canadians, tourists, visitors and immigrants en route to the United States. To locate those references, researchers must consult the original passenger lists.

From 1919–1924 individual manifest forms (Form 30) were often used instead of passenger lists as the official immigration record. Form 30 records consist of 96 digitized films which are available for browsing on Collections Canada. 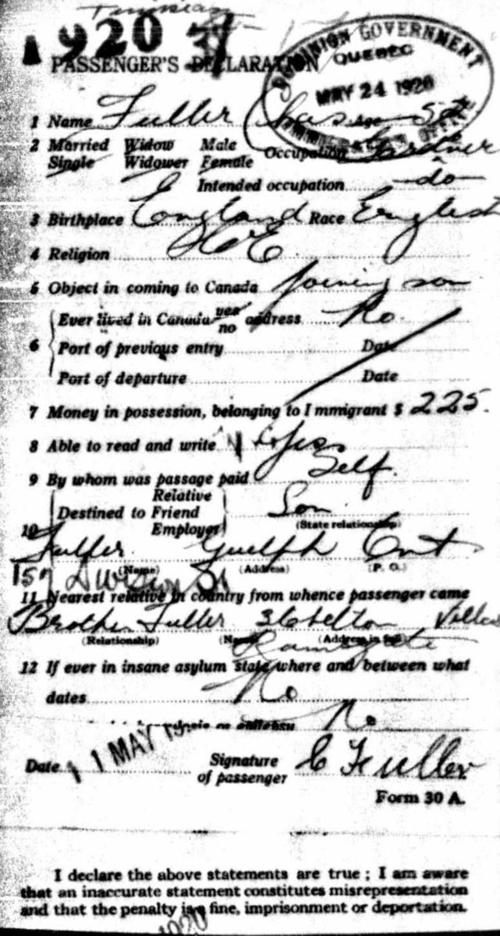 Example of Form 30 front side for my great-grandfather Charles Fuller, courtesy Ancestry.com 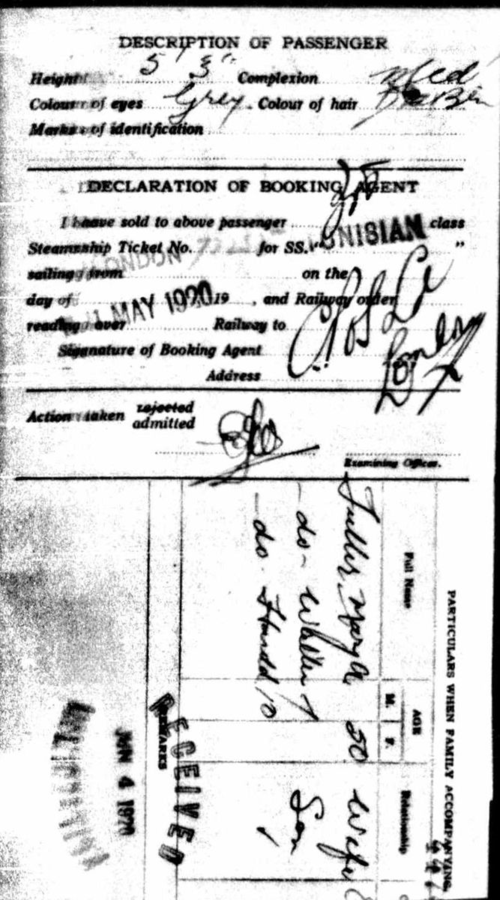 Library and Archives Canada also holds the passenger lists for Home Children, 1869-1930. Between 1869 and the late 1930s, over 100,000 young people were sent to Canada from Great Britain during the child emigration movement. After arriving by ship, the children were sent to distributing homes, and then went on to farmers in the area. Although many of the children were poorly treated and abused, others experienced a much better life than what awaited them in England.

If you are searching for an arrival from January 1, 1936 onwards, these records of immigrants arriving at Canadian land and seaports are in the custody of Citizenship and Immigration Canada. They must be requested from that agency by a Canadian citizen or an individual residing in Canada.

For a fee of $5.00 (cheque or money order payable to the Receiver General for Canada) researchers can submit a request to:

The submitter must indicate that the record is being requested under Access to Information and a signed consent from the person concerned or proof that he or she has been deceased for 20 years. If the person would be more than 110 years old, no proof of death is required.

If you do not know when your ancestor arrived in Canada, there are other records you can search for clues:

Other free resources for miscellaneous ships' passenger lists arriving in Canada after 1865 are:

We landed in Quebec City on Oct 28, 1948, our ship was the "Beaverbrae". How can I find the exact pier or landing spot in the city?

Helmut, that's a question for which I do not have an answer. I'm not familiar with specific piers in Quebec City. I would Google your question and see what results you get.

Tip - Look at both ends of trip. When searching in Ancestry I was able to locate the ship's list showing the arrival of my wife's Maternal Grandmother in Halifax aboard the SS Andania 13/3/1926 but their was no mention of her children on the ships list or her landing card. By looking at the departure from Britian I was able to Grandma and all four of her children whom I did know were with her.