Researching the Musician in Your Family

Genealogical records are useful in understanding a musician’s background.  Consider the case of a well-known American composer and bandleader John Philip Sousa. He was born in Washington DC, 6 Mar 1854 to John Antonio Sousa and Elizabeth Trinkaus. The Sousa family was living in Washington DC in the 1860 Census. Antonio Sousa was head of the household and a 34 year old musician from Spain. Antonio’s wife, Elizabeth, was born in a place called “Hessedat,” confirmed to be a part of Germany.[1] Just one source tells us that Sousa had an upbringing in performing arts and we can even speculate how a culturally diverse background influenced his voice in music. Records also teach us that Antonio was a musician for the United States Marine Corps, adding more understanding John Philip Sousa’s decision to enlist in the marines at the age of fourteen. I hear more often than not that talent runs in the family; a little genealogy detective work can easily solidify one’s story of musical heritage. 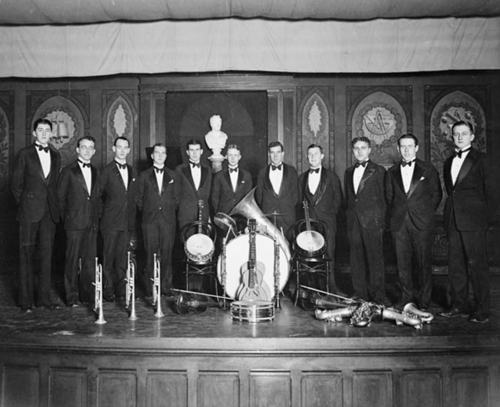 Eleven musicians posed with their musical instruments, in the Washington, D.C. area, ca 1925.
Courtesy of Library of Congress.

Have you thought about how many different types of genealogy records can be applied to researching ancestors who were musicians? In addition to sources that researchers are most likely familiar with, there are sources specific to this occupation. Music in all of its forms has been integral to the human social experience. The ways in which we can learn about musicians and their relevant history are numerous and unique.

Existing scholarship on the use of genealogy records specific to musicians is rare; therefore, I have outlined an original methodology to guide researchers in learning about musical ancestors.

I.  Start with basic biographical research

If your musical ancestor had gained some notoriety for his talent, he will most likely be found in one of the numerous databases and encyclopedias for artists. Most of the information provided relates to a chronology of their career and achievements. The most genealogically relevant information is given name and vitals. It is important to identify the given name to trace the musician in their early life. Many artists assumed aliases when on stage and in the public eye. For example, if you were trying to research the genealogy of jazz singer Billie Holiday, you would need to know she was born ‘Elinore Harris’ and later changed her name to Eleanor Fagan.[2]

A good collection to check is the American Genealogical Biographical Index (AGBI). The original AGBI is housed at the Godfrey Memorial Library (Middletown, CT) and can also be searched online using Ancestry.com. Online biography websites found through Google should only be supplemental to reliable reference works. A growing musician encyclopedia that is useful and reliable is the Database of Recorded American Music (DRAM). DRAM is a great tool for researching a musician online, and continuously catalogs recorded music, composers, and ensembles.

Check WorldCat for  The New Grove Dictionary of Music and Musicians in the reference section of your local library. This is by the far the best-published reference work for music and related terminology. There will most likely also be smaller collections of biographies related to a particular music genre. Individual biographies provided in county histories (also known as mugbooks or gazetteer) are a good source for local musicians. The Gazetteer for Caledonia and Essex County, Vermont 1764-1887, for example, tells that Judge Ephraim Paddock of St. Johnsbury was a "skillful musician" and appeased many with his talents.[3]

Many different types of records will provide the occupation of the individual. Popular examples would be the Census Records or City Directories. This form of research only works if the ancestor chose to state music as their primary occupation. Even today, some musicians struggle to make full time careers out of their passion and have to perform other occupations. If information from relatives has not been previously exhausted,  it is at this point in the investigation that talking to family members would be useful.

Newspapers are an excellent primary source for researching musicians, bands, and music history. For example, the obituary of John Metcalf, published 24 Aug 1810  in Old Colony Gazette (New Bedford, MA) describes him as a fiddler named ‘Blind Jack’ who died near ‘Knaresborough, Eng.’ at the age of 96.[4] You might even be able to find your ancestors because an upcoming concert was plugged in the local newspaper. Their name could be featured in a concert program like this one [See Below]. Check FamilySearch Wiki for Digitized Newspaper Collections and Library of Congress’ Historical Newspaper Directory.

Music has been performed throughout history for the enjoyment of people. Many of our local and federal institutions would organize a band or ensemble for the benefit of the local population. Two organizations that come to mind are churches and the military. Researching about musicians in the Armed Forces is possible through genealogy education regarding military service. Those interested in the history of military bands should consult scholarship and further reading:

Many universities and historical societies hold the papers of the local musician union. These are unpublished textual records that include member lists, minutes for meetings, and other associated information.  Here are some examples of the finding aids available in university catalogs.

An ancestor’s musical contribution, large or small, fits in a larger pattern of expression identified mostly through culture. It is important to explore your ancestor’s life in a different way through broader historical context. A country’s archives will usually have some information about the development of their music and folklife. Folklife is a newer term relating to the study of folklore. The study of folk life includes all material culture and oral tradition as inter-related. America’s Library of Congress (LOC) houses a large collection devoted to the history of American Music. Researchers can perform a name or subject search in the Performing Arts Encyclopedia for sound recordings, textual collections, photographs, and more. LOC also houses a growing database called American Memory that contains essays on American Music and Folklife. Scholarship on music from around the world can be found in JSTOR’s database of scholarly articles.

The guide is open to new additions and revisions from other researchers. My own desire to merge the worlds of music and genealogy has led me to consider creating a database for genealogical sketches of musicians. Family historians should feel fortunate if they are able to listen to their ancestors’ recorded performance. It provides a new window into their lives and a more complete view of their humanity.

My 2xg-grandfather taught music in Primitive Baptist churches in the NC mountains in the late 1800s. He traveled to different churches and we even have a photo of him with one of his choirs or music classes. He taught the shaped-note music style and a local genealogy library in the area had copies of a few pages from his music book. I'd never heard of the style before, so it was an interesting learning experience.

Jake thanks for joining my blog on wordpress. I have written 15 people's life stories; three were in great detail with family trees. Most of my personal links are to UK but I have also done some to Ireland and of couse, Canada. I have used Mornmon sites online too and visited a localmicrofiche site.
I found your talk about musicians and de sousa intereting. I am Welsh and we love music in my family where my cousin's son is an opera singer, my cousin sang sols with Messiah etc and various members play instruments.I play piano but not as well as I used to but I love classical music. I also had two uncles in a band in 1920's One played the clarinet and the other violin.
I also studied history and specialised in 15th century England. My degree was don in Uk and I graduated in 1959.
I wish you the best with you career.
Jane

Hi Jane, sounds like a very interesting and musical family! I am glad to be following your blog.