What the Heck Does It Say?? 5 Tips for Deciphering Old Handwriting!

We genealogists are often faced with handwritten records that are a challenge to read. Sometimes the writing is cramped and tiny. Sometimes the letter formations are unfamiliar. Sometimes the document and ink is faded. Sometimes it is simply bad handwriting and looks like nothing more than a scribble! What's a genealogist to do? 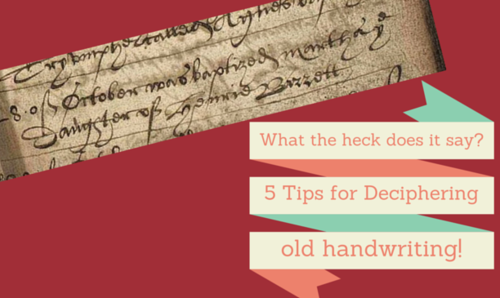 When you are trying to decipher challenging handwriting there are a few simple methods you can use.

1. Compare other words and letters in the record. You may have to look a few pages ahead or back to get a good overall comparison of letter formations used. If you think a letter is a “C” for example, check for a “C” word you recognize and compare the formation of that letter to your unknown letter.

2. Put a blank white paper over the words on your screen or on the page and trace it. Do this several times. Then look at your tracing. Often the words or letters become clear when isolated from the rest of the document.

3. If you are using a microfilm reader, place a pastel sheet of paper over the screen. Pale yellow or pink seem to work best to make the writing more legible.

4. Consider the record source. What country is it for? That will help you figure out possibilities for locations. It is best if you know a specific area. For example if I know a record is for the County of Simcoe in Ontario, Canada and not for Kent County in England or New York State in the USA I can narrow the possible location names in the record.  Also different countries wrote their letters in different ways. German writing for example is very different from American or British.

5. Determine when the document was written. Handwriting changed over centuries and thus a word written a certain way in 1630 for example will not be written the same way in 1730 or 1830 and so on.

Letter formations changed greatly over time. For example during the mid 19th century, any word with a double "s"  was formed in such a way that to our eyes it appears as if it is "fs"

In the image above, written ca 1860 in Quebec, Canada, the text reads "Married Wm. Massey". Note how the double "s" in Massey looks like "fs"

Also, if the document was written in a different language and country, it is wise to familiarize yourself with that country’s letter formations over the years.

This next example is the church entry of the baptism record of my 11th great-grandmother Martha Barrett in England in 1598. I knew the recording of her event was somewhere on the page of church baptisms but where? It took me awhile to find her on the page but by scrutinizing the handwriting of all the entries I was eventually able to recognize her first name Martha and the surname Barrett.

A Handwriting Tutorial is online from FamilySearch

Interesting article. Thank you for sharing.

I make lists of all of the alphabet letters (upper and lower case) and numbers in a notebook such as when I'm trying to decipher old census pages. Then when I come across that letter in a word I try to imitate the way the writer wrote it. Often where they started the letter and where they ended is important to differentiate letters which are similar such as upper case "M's" and "W's" or whether the last letter is a lower case "e" or maybe it is just the way the writer ended a word with something that looks like a lower case "e". This will often help me in figuring out what the letters are. Also when I find typical legal language in documents such as court or land records which are easy to read I will write them in my notebook. That way I familiarize myself with the phrases most often used. Then when I come across the same kind of document and it is faded, I'll be able to figure out most likely what it says.

Great tip, Barry! Thanks for sharing your idea.

Kind of a funny story. I was in a courthouse going through deeds of my family and word for word copying them in a notebook. If they repeated a phrase from one I had already written I just used three dots ". . ." after the first few words of the (by now to me) redundant phrases. There were government workers looking up things while I was there. One woman had apparently been watching me copying all of those deeds in a notebook and she came up to me and said, "You know there's a copier over there." I didn't know but was familiarizing myself with something new and besides the newly bound deed books (containing smaller copied pages of the original books) were very stiff and probably would have been difficult to make good copies with anyway. But I thanked her for her information just the same and just kept writing them in my notebook.