Coffin Plates or plaques are a very unique resource for genealogists. Coffin plates are decorative metal plaques that contain the name and death date of the deceased. 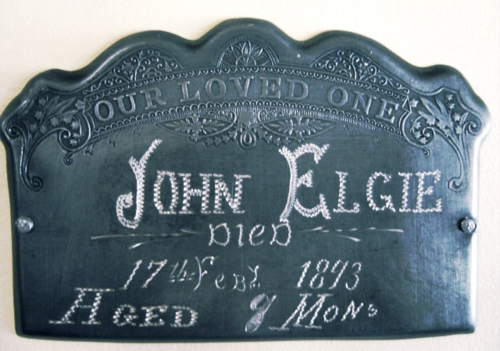 The oldest coffin plates date from around the 17th century and gained popularity in North America in the 19th century. When a loved one died, the family would hire a local blacksmith, a metalworker, a silversmith, or a coffin plate manufacturer to create a metal plaque and engrave it with details of the deceased person. Depending on the financial resources of the survivors, coffin plates ranged in size, metals used to create them, and how much information was engraved. Common metals used were lead, pewter, silver, brass, copper, zinc or tin.

For a basic funeral, a simple lead plate would be engraved with the name of the deceased, date of death and the age of the departed. The plate was then nailed to the lid of the coffin or propped up on the lid. Families with more money could afford a plate of a more expensive metal and a more elaborate design.

In the late 1840s the first machine made coffin plates began to appear. The earliest machine-made plates were simple shapes stamped out of a flat piece of metal. More elaborate shapes with intricate stamped designs began to appear and by the 1860s there were catalogues of shapes and designs that survivors could look through to choose the coffin plate they wanted.

By the middle of the 19th century almost every family could afford to have a coffin plate put on the coffin of their loved one. During this time period it was a common practice to display the coffin plate on a wooden stand on the lid of the coffin. Sometimes it was placed on a nearby table along with a photo of the deceased. The family then  took the coffin plate home as a remembrance of their loved one. Many such plates were tucked away in drawers and passed on in families but others were framed and hung on walls in the home.

This practice of taking the coffin plate home started in the early 1840s and was particularly popular in the North Eastern United States - Maine, Massachusetts, Vermont, New Hampshire, New York, Connecticut and Rhode Island. This practice peaked circa 1880 to 1899 and by the 1920s it had fallen out of favour.

Coffin Plates in the United Kingdom

In England the small decorative coffin plates popular in North America were not used as much. English burials for the more famous or wealthy inhabitants usually had a large breastplate attached to the deceased's coffin. These breastplates, usually 12 to 15 inches in height, were meant to be buried with the coffin and the only time you will see them is if a cemetery has to be relocated. 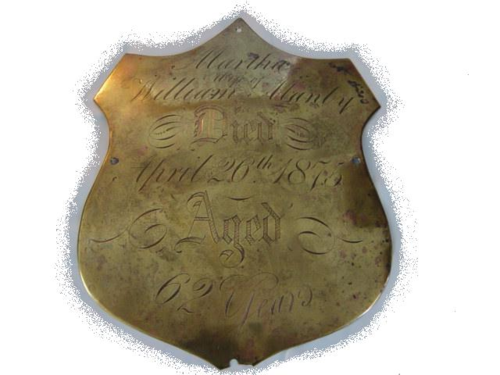 In that case, graves are dug up and coffins removed to be transported to their new location. Occasionally the attached breastplates are removed and you will sometimes find them for sale to collectors. They were often made of brass or copper and had ornate shapes such as shields.

Your family may have an ancestor's coffin plate or you may be lucky enough to find one in an antique store or flea market. The coffin plate of my great-great-grandfather was found in a local antique store and I was able to purchase it from the man who bought it. 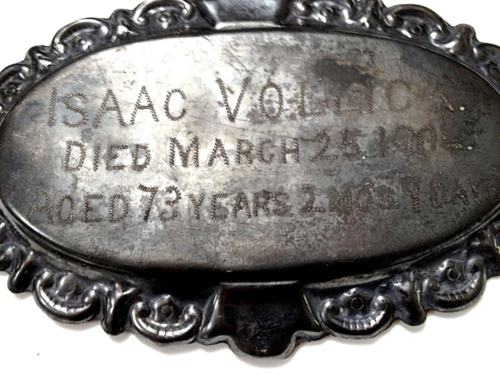 My husband inherited the coffin plate of his grandmother's sister who died at the age of 2, and a few years ago he purchased another ancestor's coffin plate at an estate sale for his great-grandmother's brother.

If you are stuck finding a death record for an ancestor or you simply want to flesh out his or her details, you may want to hunt for a coffin plate. Ancestors At Rest website has an extensive database of coffin plates online with images.

Never heard of coffin plates . Good to learn new things, that night help in my research.EDITH