Boots on the Ground Research: And the Walls Came Tumbling Down

Guest blogger Eric Stroschein was recently in Stockholm, Sweden connecting with relatives and researching his ancestry. This is the fourth in a series of articles from his visit to the old country. You can read his first article here. 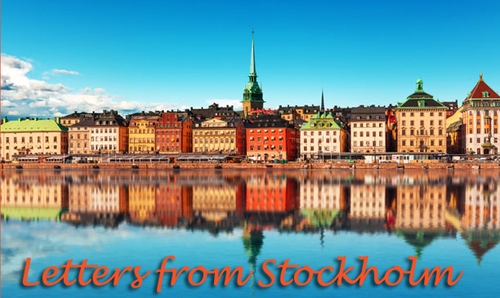 It is no secret that I much prefer being in an archive researching, more than sitting at home in front of a computer. The reality is, to optimize your time in a repository, a researcher must do a certain amount of online research to locate records and know what they are asking to be pulled. Nothing beats experience in a specific location, knowing the staff, and being educated on the holdings. Prior planning is extremely important when researching out of town because some of the biggest enemies a genealogist will face are time, expense, and expectations.

From the moment you leave home the clock starts counting down to your return and your expenses start to accumulate. Prior online research is mandatory if you want to effectively manage both of these first two items. Expectations can be the most difficult of these three to tame. In order to maximize your time in the archives it is necessary to manage your expectations of yourself and what you may or may not discover.

Prior to leaving for Sweden I had done a massive amount of research on my family but I also did a lot of research on specific repositories I planned to visit. My study of each archive included locations, hours of operations, holdings, best transportation to and from the repository, cafes in the area, was there a specific expert I needed to consult, and a whole host of other items. I thought I had done my due diligence but as the poet Robert Burns so aptly says in his poem To a Mouse, "The best laid schemes o' mice an' men / Gang aft agley". Roughly translate, “The best laid plans of mice and men / Often go awry.” This is why you should always have a plan B…or C, D, E, and F.

Recently, when I got to Sweden I found out that my research of the Marieberg main archives for the Swedish National Archives was missing one key component, it was closed to research due to remodeling. I had missed this major point contained in a little side note on their website. It states that this facility will be closed September 1, 2015 through October 1, 2016 and I arrived on September 3rd. Wow…this was bad timing since this was the main repository I had planned to research in. Time for Plan B.

One of the great advantages I have is that about one quarter of my research centers in Sweden. I have had family that has lived from the far north in Lapp to the far south in Skåne. Many of my family have either lived in or came through Stockholm. One of my secondary repositories to research in was the Stockholm stadsarkivet (city archives). I had many different paths I could follow at this archive.

One of the issues that has been nagging me for some time was the story of my second great grandmother Matilda Sofia Forsberg Abersohn. She was a mystery wrapped up in an enigma who seemed to appear in 1880 and disappear just as quick after her husband dies in Stockholm. I had found information that sent me to New Jersey and Chicago, I was fairly convinced that I had found her death certificate in Chicago in 1940 but I was not absolutely sure.

A cousin and I had found a birth record at the maternity hospital Allmänna Barnbordshuset that could possibly be Matilda. The maternity hospital system was set up in Sweden so unmarried women could come and give birth without having to divulge any personal information because at that time it was illegal to have a child out of wedlock. After an exhaustive search, we found the only child in Sweden with the name Matilda Sophia, no last name, born on 2 June 1861, the birth day used by Matilda Sophia Forsberg Abersohn. The mother’s name was Christina Carlsson. According to my cousin who lives in Sweden, the letters M.O. preceding the mother’s name meant the mother was probably unknown and the name most likely was fictitious. We had done another massive search for a Christina Carlsson associated with a Matilda Sophia with no result. Because we were unable to find any other trace of her until 1880 just before she married, it was surmised that she was probably an orphan. This looked like a massive brick wall and question to which I may never find the answer. The one glimmer of hope may be located in the Stockholm stadsarkiv.

In Stockholm, unwed mothers were allowed to write down family information and seal it in an envelope to be included in the child’s file. At the age of 18 the child could request the envelope and learn about their family. Many of these letters still exist and are located in the Stockholm stadsarkivet. This potentially goose chase became my Plan B.

My wife and I arrived at the archive just after opening. It was somewhat busy but we found an open research station. I retrieved my documents and prepared for what I figured was going to be an arduous day filled with dead ends and racking of the brain (expectations) to ensure we had covered every possible angle of the research question, “Who were the parents of Matilda Sophia Forsberg?” I went to the counter to speak to an archivist. Anne was the incredibly helpful person who greeted me and she addressed me in Swedish to begin with. I explained I speak English and very little Swedish. She answered back in English with an English accent which was a bit unexpected. I explained my question and the maternity hospital letters I was trying to access. She said I could pull the letters but first she wanted to examine my information.

We went back to my work station and examined my documents plus the birth record. Anne agreed this could be a very difficult person to find. She then asked if I had searched their database of Stockholm that connects many different resources together called Datasbasen Rotemannen. I had not, the desktop of the PC was in Swedish and scattered with many programs and databases to which I was unfamiliar. She booted up the program and entered Matilda Sophia born 2 June 1861. The results were near instantaneous, at the top of the list was a Matilda Sophia Forsberg Abersohn with 24 linked records. I excitedly said that is her, we were both surprised that she came up right away. 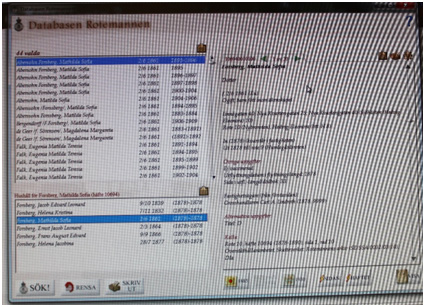 Photo of the screen at the Stockholm stadsarkivet by Eric Stroschein

This program connects many different databases that are specific to Stockholm like the Mantal Books, tax records, marriage indices, and other census type data. This relational database has been painstakingly assembled by Swedish genealogists that displays the person you are searching for and other people related in the records. You can click on the related people to view the indexes to their records. If the records have been digitized a button illuminates that takes you directly to the digital record. 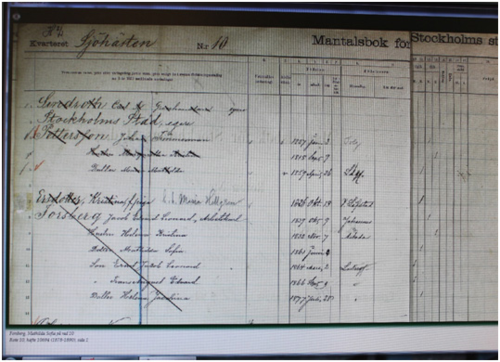 Photo of the screen at the Stockholm stadsarkivet by Eric Stroschein

Three of the earliest records for Matilda came from the Mantalsboks[i]. The first one from 1878 shows a Matilda Sofia born 2 June 1861. Could this be my elusive Matilda, she is linked to the Abersohns in this database and she is listed in this Mantals book as a daughter. I researched each and every member in the record above and the mother in this record Helena Kristina Forsberg is listed in the other children’s birth record as Helena Kristina Carlsdotter/Carlsson. Que the music…the angel choir begins…MATILDA HAS BEEN FOUND! Genealogist doing a happy dance in an archive while many confused Swedes look on.

Matilda was born to Helena prior to her marriage to Jakob. They were married 1 December 1861, about 6 months after Matilda’s birth. Tragedy stuck this family soon after this record was made when on 28 May 1879 Helena dies then again 16 April 1880 when Jakob dies. I was so fortunate that the Mantalsbok survived since it is the only place I have found where this family was recorded together. The picture becomes very clear with the new found knowledge that both of Matilda’s parents died prior to her 18th birthday.

This problem currently could not be resolved online and punctuates the need to get out to the archives, libraries, and repositories to research in the original records. I was fortunate that the records existed that helped with the solution and that some very helpful genealogist painstakingly created a database linking the records. A good research plan that had contingencies was crucial to the success of this trip not to mention how fortuitous it was that the Marieberg archives was closed for remodeling. Choosing Matilda as my Plan B and the final result was beyond any reasonable outcome I could have expected.

If you missed previous articles in this series start here.

[i] Mantalsbok were a type of population register kept by the church from within specific parishes. They kept track of the movements of resident’s movements within the parish.

Posted by Geoff Rasmussen in Tips from the Experts, Travel | Permalink | Comments (2)

What an amazing and wonderful story. Yes, there was serendipity involved, but only because you went well-prepared and with an adaptive attitude. I don't have a trip to Sweden in my future, but your example is one I hope I can live up to in my own research. I am sitting here deeply moved by all your discoveries, the warmth of your cousins and the researchers who assisted you. Thanks for telling about your fascinating adventure!

Anne,
My pleasure. I hope that sharing these experiences can help somebody else with their research. I feel very fortunate and blessed for my grand Swedish trip. It has deepened my resolve to visit the lands of my ancestors. They most likely contain answers to many of my nagging questions.