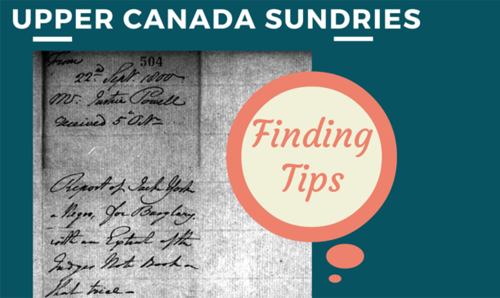 Have you ever found yourself completely blocked when trying to find an ancestor? You've found great-grandpa in all the usual records such as census, births, marriages and deaths but now you are at the proverbial brick wall.

That's when the fun starts! There are many less obvious genealogy records out there. Depending on the location and years you need, you may be surprised to find a wealth of other more obscure records.

The Upper Canada Sundries are an invaluable genealogical resource for those seeeking an ancestor in early Ontario, Canada, but many researchers have never used them.

The Upper Canada Sundries, aka Civil Secretary's Correspondence  are found at LAC (Library and Archives Canada) and at the Ontario Archives. They consist of 32 volumes on 14 reels of microfilm, now digitized and are an assorted collection of, as the name implies, correspondence.

The main responsibility of the Civil or private Secretary to the Lieutenant Governor was management of correspondence. The Secretary ensured that it was acknowledged, referred onward or filed. Closely related were the duties of receiving and acknowledging addresses, petitions, memorials and applications for office; transmitting messages and public documents to the Legislature; and referring petitions to the appropriate public offices for opinion or advice prior to submission to the Executive Council.

Although the province of Upper Canada did not come into existence until 1791, supporting documents of earlier date have been incorporated into some series of its records.

The Sundries are filed chronologically. There is no name index but the wealth of genealogical information makes them worthwhile to browse through. They contain an assortment of such genealogical items as undated petitions, marriage certificates, land records, letters, petitions for land, testimonies during wartime, military records, petitions for mercy for those charged with treason, etc.

The films have been digitized and can be found online as part of  Canadiana.ca's Heritage Project. There are 94 reels of digitzed microfilm for the Upper Canada Sundries  at http://heritage.canadiana.ca/view/oocihm.lac_mikan_125539 but be forewarned that they are not indexed.

Clicking on the "About" tab for each specific film provides limited information. For example Film C-4502, the first reel in the series, tells us only that this film contains Upper Canada Sundries Vol. 1-3. That's not much help to the researcher.

The good news is that there are other projects online which are indexing the Sundries, sort of. The diligent researcher will still have to do some investigative work to figure out which film they need but here are the various projects that will aid you in your quest.

The Index to Upper Canada Sundries on the Upper Canada Genealogy website contains an alphabetical index with surname, first name, date, location and page numbers of document. It does not contain the reel number so this is where investigative skills come into play.

The Finding Aid on the Collections Canada website is a PDF file you can download to your computer. It contains the film numbers, volume numbers and years within each film, as well as a brief description of each item on the films.

Here is one example of a certificate I found with a search of the Upper Canada Sundries. It concerns the daughter of my Loyalist Ancestor Isaac Van Valkenburg aka Vollick. Note the variant spelling of her surname. When searching for an ancestor it is always a good idea to use wildcards if possible, and if not, to try variant spellings of your ancestor's name. The certificate reads as follows with my notes inside square brackets [ ]: 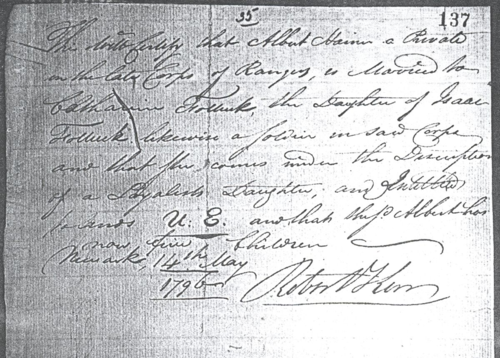 This will testify that Albert Hainer a Private in the late Corps of Rangers [referring to Butler's Rangers, whose disbanded soldiers settled the Niagara area of present day Ontario], is married to Catharine Folluck [sic. More commonly written as Vollick or Follick], the daughter of Isaac Follluck, likewise a soldier in said Corps and that she comes under the description of a Loyalists Daughter, and is entitled [can't read next word] U.E. [Unity of Empire, a title applied to Loyalists once they were accepted by the Council and officially declared a Loyalist] and that said Albert Hainer now has five children.

This document has some pretty amazing genealogy information! It provides proof that my Loyalist ancestor Isaac was in Butler's Rangers, that he had a daugher Catherine who married Albert Hainer before May 1796 and that Albert and Catherine had 5 children by that date. This document also tells me that Albert was also a soldier in Butler's Rangers and that Catherine's father has been approved as a Loyalist.

If researchers are patient and spend time learning about unfamiliar databases and how to best use them, it pays off. The Upper Canada Sundries are there for your use if you care to spend a few hours of digging in hopes of finding a gem or two about an ancestor.

Hi Lorine,
I believe the word(s) you indicated in your transcription to be illegible are "to lands", based on letter formation in the rest of the text.

Thanks for this great article, very helpful!
Bruce

Thanks Bruce! And thanks for your kind words - glad you are finding the article helpful

This will be very helpful. I can't wait to dive into it! I wanted to tell you that I've included your post in my Noteworthy Reads for this week: http://jahcmft.blogspot.com/2015/10/noteworthy-reads-23.html