This Age At Death ALMOST fooled me!

Without reading ahead, can you guess this age at death? Although this is from a Swedish parish register, the numbers are pretty clear. And you probably don't need this clue, but age at death in any record I've seen, is usually written in this format - years, months, days. 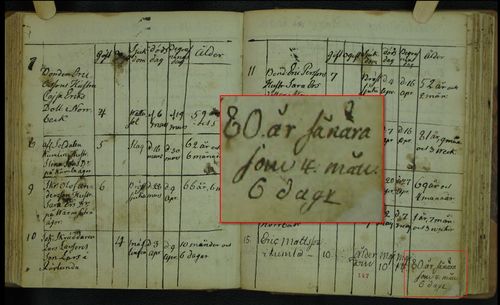 I, too, thought it read 80 years, 4 months, and 6 days. I even transcribed it that way the first time. But it didn't add up.

According to this death record, Eric Mattsson (my 7th great-grandfather) died May 10, 1809. So I plugged this in to Legacy's date calculator (find it by going to View > Calendar) to verify his birth date:

and pressed the Calculate button:

If I've 1) interpreted and 2) calculated everything correctly, AND 3) if the person reporting the age was spot on, Eric would have been born on January 4, 1729. Of these three, the calculator probably has the best chance of being 100% accurate.

I'm so glad I took a closer look. Had I accepted this birth date, I would be looking from now until the end of my days for an Eric Mattsson with this birth date. It simply doesn't exist.

In prior research, I discovered that Eric was born 15 Sep 1729 - an 8 month and 11 day difference. My initial thoughts were 1) maybe there were two Eric Mattssons who died in 1809 and I should look for the other (mine was reported in the household records that he died this year) or 2) the age at death could easily be wrong. So I looked for another Eric Mattsson's death and didn't find one. I almost concluded that the person reporting his age just didn't know for sure.

I'm so glad I took a closer look.

You see, between the years (80 år) and the months (4 mån) was a Swedish word or words that I couldn't interpret. With my English-speaking eyes it looked like the month of January, but my cheat sheet at the FamilySearch Wiki had a different spelling for January. So I took it to the Swedish Genealogy Facebook group which I learned about from Kathy Meade's webinar, "Have Swedish Roots and Don't Know How to Get Started?" Last night I posted this question: 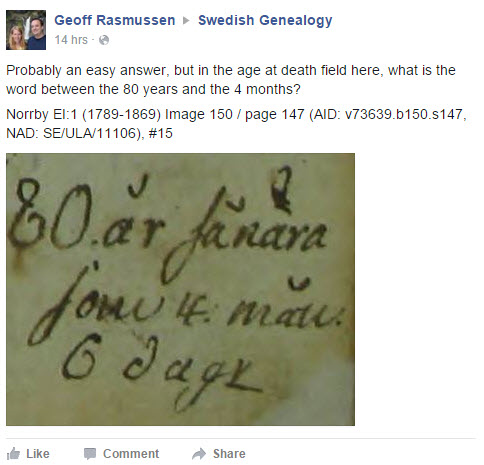 This morning I woke up to a response from one of the members of the group:

At first I could not figure out how she came up with 79 years, 7 months, and 24 days old. Then I copied and pasted her response into Google Translate.

And then it hit me. This is saying that Eric was 4 months and 6 days away from his 80th birthday. While I've never seen an age at death reported this way before, it made sense. If I add 4 months and six days to the end of his death day, we get September 14 which is pretty close to the 15th.

Thanks to Facebook group member, Ingrid Björkudd, for teaching me something new today! Isn't genealogy great - a never-ending educational process. Also, thanks to the technology at ArkivDigital, Google Translate, FamilySearch Wiki, FamilyTreeWebinars, and even Legacy's date calculator for helping me put this together.

May I use a link to this article for the little newsletter of the "European Interest Group" New Zealand Society of Genealogists.
Margaret

I have found marriage records in the Midwest that ask for "age at next birthday."
This isn't the question we would expect; we must always be careful about what question is being answered.

Thanks, Geoff. Another good reminder to me not to make assumptions- check out anything that seems a bit off! Also for the reminder that special focus groups are out there. I sometimes think that because all of my Euro ancestors are from Britain, most of them entering in the 1600s, I don't need to join a special interest group. Ignoring the fact that in the 1800s, one of my great-grandfathers on my mother's side came from rural Gloucestershire and spoke Gaelic as a first language (I knew him when he was quite old and I quite young, and I could not understand him!) And my great great grandfather on my father's side was from the west coast of Wales, spoke Welsh as a lad, spent a decade as a seaman, and has a wonky birth registry much argued about by his descendants. Now going to go look for Gaelic/Welsh genealogy groups...

:-) so everyone can get the sequence right for a death - i.e. years, months, days but can't get it right for days of the month - i.e. day, month, year!

Another "slippery slope" for American genealogists is the British dating system, when displayed by numbers only, reverses month and day. If you aren't aware of this, the date 3-8-1917, would be incorrectly interpreted as March 8, 1917. In fact it's actually AUGUST 3rd, 1917. This really is only a problem for the first 12 days of a month, after that it's obvious 13-8-1917 means 13 AUG 1917.

What bothers me, is the incorrect information on tombstones! The family bible says one thing, and the burial spot will have another date..."written in stone"! When you want to correct it, on Find A Grave, they don't except your date from the family in their Bible, they go with the tombstone.....Very frustrating!

Since we are counting backwards, and it would take 31 days to go from the same day in Aug to Sep, subtracting 6 gives you 25 and does put you exactly at Sep 15!

I actually have a person in my tree whose last name is spelled incorrectly on their grave marker! This certainly threw me off in my early days of research. It is still hard for me to understand it being left that way, but I am aware of a person in my family who died, and I attended the funeral as a child, and years later when I got into genealogy, I went back to the cemetery and discovered no one had ever put up a marker. Because I know the people involved, I know that this person had no survivors who lived locally and this just ended up being an oversight - perhaps that is what happened with the misspelling also, or perhaps they simply had mercy on the engraver and figured everyone would still know who it was!

On Joannas point about "british" dates: Yes the DD.MM.YYYY format is as entrenched here in england as the MM.DD.YYYY format is in USA. What is referred to as British, though, is also common in very many places (most?) outside USA including Europe and Japan. But all number dates are unlikely to be found anyway from the days when pen and ink were king so dont figure much in pre 20th century sources. If you did see them, the month may be roman: VIII for August - otherwise spelled out "August" or "Aug", etc.
But you may find.records here that are the american way round but in my limited experience only if the month is in words. So you may see August 3rd, 1803, or just August 3rd if the whole page starts in 1803. Or even just 3rd, if the top entry was (say) August 1st. I hope you can see where I am going with this...
In Europe, a YYYY.MM.DD format is used sometimes in business. When working for a European company I had to date reports like this. It has two particular merits, first that if you use it in file names, an alpha sort will create a sort that is also in ascending date order, second that It cannot be misinterpreted. (The sort order is right only if you use leading zeroes though: 1803-08-03)
The writer of a register, meanwhile, 200 years ago, may head the page "1803", then write the first date as August 3rd, the next might just be 4th, 5th, and so on until September.
So in a way the reversed order YYYY.MM.DD was unconsciously used long ago.
But as Legacy can support any date format pretty well, I suggest never type a date you know to be 3rd of August as 08-03, or even 03-08 as typing it Aug-03 or 03-Aug will be sorted out by Legacy into the format you want to see.

Joan's comment about the "s" in the above sample needs correcting - it is more probably a 'long s', known in English as one of a group of 'ligatures', written more like an 'f' with a tail, not an L or a J. It was used extensively in hand-written documents in England well into the 19th century, but disappeared gradually as printed documents and forms became wide-spread in the middle of the 1800s. I can't comment on its use in Swedish, but most of the other letters are formed similar to English, and interpreted as such by Geoff.

The "long" s is Unicode 017F, if anyone is interested, and it definitely isn't an "f", which is Unicode 0066 (completely different character).