Have you wondered about what you could find regarding your ancestors’ property? Few things were more desired by our forbearers than having their own tract of land. I would also say that in genealogy, few things are more desired than the ability to identify the exact plot of land our ancestors lived on. 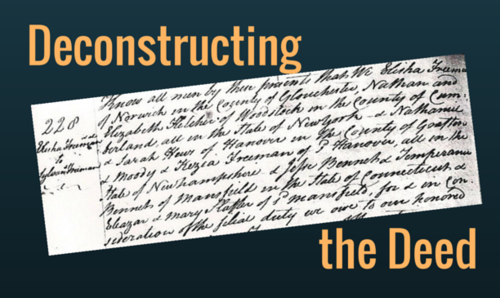 Let's consider some of the genealogical clues that can be found in a deed. Deeds, mortgages, liens, and patents, all have the potential to add substantial detail to your ancestor’s lives. Six years ago when I set out to research my 5x great-grandfather Elisha Freeman, originally of Mansfield, Connecticut and who later chose to pursue frontier life in the upper Connecticut River, I was stumped, only able to gather incomplete/inconsistent family tree data. But the land records I discovered from his later adopted towns of Hanover, New Hampshire and Norwich, Vermont have kept the research trail hot, establishing details that otherwise exist seemingly nowhere. In April 1777, Elisha of “Norwich, Gloucester County, New York” appeared along with five of his siblings in Rockingham County, New Hampshire where they conveyed their father, Sylvanus Freeman’s property in Hanover, New Hampshire to their brother Sylvanus Freeman Jr. According to the deed, this tract of land was conveyed as a gift for taking care of their widowed mother Mary.1 Beyond just the property description, these records have the ability to unveil rich genealogical detail. All of Elisha’s siblings, their spouses, and residences appear in this document. To this day, I still peruse the stack of deeds I photocopied from the town office in Norwich, Vermont for Elisha Freeman, only to find new leads in my research.

The Anatomy of a Deed

The reward of recreating our ancestor's land does require a skill set and most of all practice. A lot of the times, the density and cursive, complete with colonial English motifs, can intimidate the beginning researcher. Records of this type were for the most part, recorded in a systematic fashion. 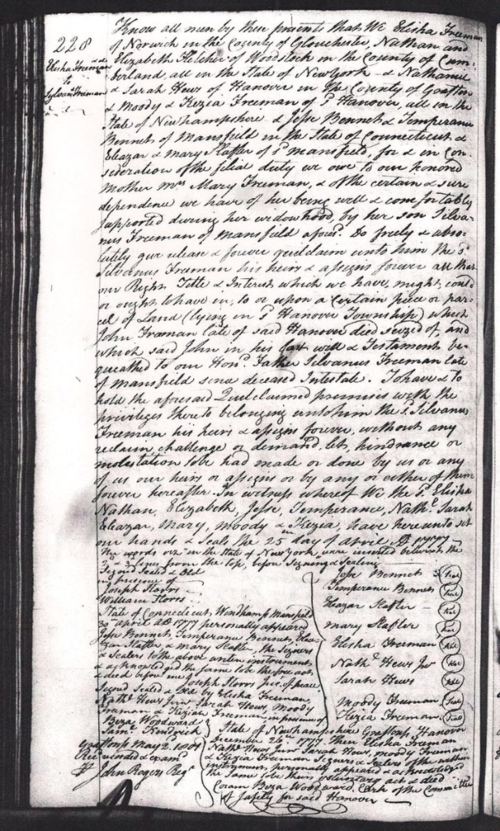 When analyzing the land records of your ancestor, you want to set yourself up with an efficient, organized method to intake and evaluate the information. Part of what makes land research so interesting and time-consuming is that it can become a very hands-on project. Studying the surveyor’s descriptions leads us to a physical product, often a visual representation of the property boundaries. Examples would show a sketch of the property’s boundaries and dimensions, an overlay of the property on historic or current maps, and if were lucky, a photograph. I want to acknowledge as many of these approaches so that you can find the right way to establish these connections to your ancestor and their life.

The surveyor’s descriptions, beginning in the middle of the record, usually after the phrase “described and bounded as follows,” are meant to provide directions in which the property’s boundaries are heading. Property markers, often at the meeting point or vertex of two property lines, can be mentioned in various descriptions by the surveyor. You may often see property markers described as “stake and stone” or an arbitrary natural landmark. The direction of the property line is described in relation to the cardinal directions, such as “then south 40 degrees west 46 rods to said Samuel Waterman’s line” or as running parallel to other landmarks such as the river, road, or train tracks. As genealogists, we need to record these features and see if maps can unveil their location.

One tip I can offer when transcribing the deed is to keep a placeholder as you work your way down the page. Most of us will not remember the last coordinate and we waste time trying to find it again amidst the dense penmanship. If you are unfamiliar with transcribing and deciphering old handwriting, pace yourself at first and only focus on one part of the record. In years past, I have transcribed deeds verbatim on a page or word document, but it might be a little easier to digest if you put the property description in an excel document. The table should include the following information:

Because surveyor’s worked using cardinal degrees, land surveys can be reproduced using a protractor and graph paper. This has become a traditional method only recently, because technology and new user-created platting software apps allow anyone to plug in the surveyor’s coordinates and trace the metes and bounds of the property in a much less hands-on fashion. For some of us, like myself, who maybe lack a sense of cardinal direction, technology saves the day in this case. As someone who acknowledges advantages to both methods, you might want to consider a hybrid study of the property in the traditional method and platting technology. Do both renditions of the property match or are their noticeable differences?

The survey description can offer another valuable bit of information on our ancestor: their neighbors. Many land records offer descriptions of the property such as the line running to the NW corner of John Salter’s lot. As a researcher, you want to record these neighbors and start getting to know them. You may want to pull their deeds and start platting their land as well. The outcome of these analyses and study projects can be very useful in visualizing the community of one’s ancestor and presenting proof of kinship.

FamilySearch – Check FamilySearch’s catalog both online and microfilm for the deeds in your particular area. A sizeable collection of land record research is available for free online, allowing you to peruse original deed books from municipal offices.

FamilySearch Wiki – Need to know where the land records are in a particular state or jurisdiction? The FamilySearch Wiki, maintained by professional and knowledgeable genealogists, will guide you to the right repository.

Bureau of Land Management – Your ancestor may very well have been of the millions of U.S. Citizens to buy land from the federal government. The value of this website is not just in being able to access a digitized image of the original record, but the plat coordinates can be entered in Earthpoint, which will display the exact location and boundaries of the property in Google Earth. Lisa Louise Cooke was very informative in pointing out this tip through her Legacy webinar, “Using Google Earth for Genealogy”.

David Rumsey Historic Map Collection – Historic maps are a great source for genealogists and can be very useful in orienting one’s mind to identify the ancestor’s property. Landmarks and place names often fade out of cultural memory. David Rummey’s collection stands out for it’s availability of free historic maps, as does our Library of Congress.

Metes and Bounds - Software for Mac and Windows with free and subscription options available. More options such as overlaying and drawing adjacent properties are featured in this software.

Jake Fletcher is a genealogist and blogger. He received his Bachelor Degree for History in 2013 and is now researching genealogy professionally. Jake has been researching and writing about genealogy since 2008 on his research blog Travelogues of a Genealogist. He currently volunteers as a research assistant at the National Archives in Waltham, Massachusetts.

Excellent Jake! This goes into my toolbox to use now and as a reference in the future. Thanks!

There generally is no legal requirement to record a deed at the time of purchase, although the advantages to doing so are obvious. However, many times I have seen deeds that were not recorded after an acquisition until the next time the land was sold or subdivided. I've often wondered why it wasn't recorded earlier and speculate that in early times it may have been a long trip to the county seat, or in hard times maybe they put all their cash into the property and couldn't afford the recorders fee. Or perhaps they were just naive and unaware of the benefits of recording. One does see instances of litigation over property in which one party claims ownership but cannot prove it because it wasn't recorded and they cannot produce a deed due to fire or loss.

Occasionally I have seen old newspaper articles that mention deeds that sat in someone's desk for decades until they were found by descendants and taken in to be recorded or donated to a local history group when the land had already been transferred by some other instrumentality.

So this can sometimes explain why a deed was recorded much later than the transaction.

Thanks for adding those points David!