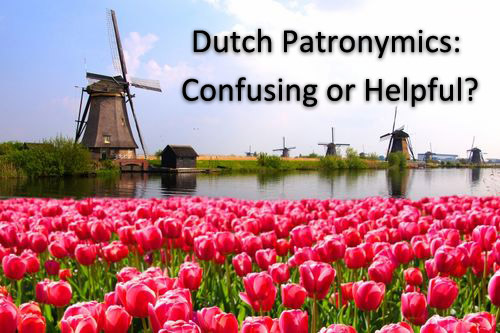 How can a man with the surname Mackelyck have sons with the surname Woglom? Because of Dutch patronymics, it’s not only possible, it happened. The most common Dutch naming custom in New Netherland (present day New York) pre 1687 was that of patronymics, or identification of an individual based on the father's name. In 17th century New Netherland Pieter Adrianszen (using the patronymic Adrianszen meaning son of Adrian) had the nickname of Soo Gemackelyck (translation: so easy-going). But he was also known as Pieter Van Waggelen with variant spelling Van Woggelum. When patronymics ended in 1687 under English rule his children adopted different surnames. Some took Mackelyck, based on his nickname) and others took Woglom (based on his place of origin name). 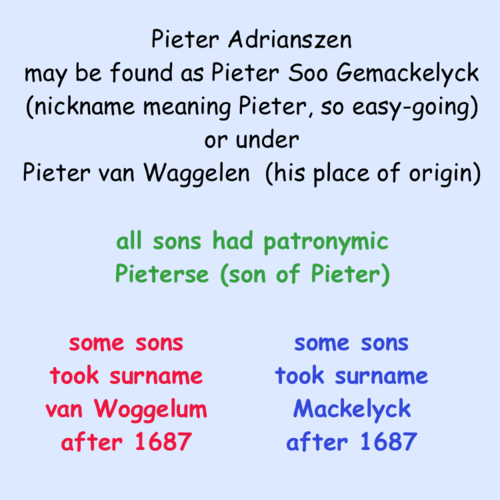 But what are patronymics and how are they formed? Jan Albertszen as an example, is named after his father Albert. Albertszen means son of a man named Albert. The patronymic was formed by adding -se, -sen, or -szen. Daughters would very often have the ending -x or -dr. added. For example, Geesjie Barentsdr. (Barentsdochter) is named after her father Barent.

An individual could also be known by his place of origin. For example, Cornelis Antoniszen, my ninth great- grandfather, was known in some records as 'van Breuckelen', meaning 'from Breuckelen' (Breuckelen being a town in the Netherlands). The place-origin name could be a nationality, as in the case of Albert Andriessen from Norway and my ninth great-grandfather, originator of the Bradt and Vanderzee families. He is found in many records as Albert Andriessen de Noorman, meaning the Norseman.

An individual might be known by a personal characteristic: e.g. Vrooman means a pious or wise man; Krom means bent or crippled; De Witt means the white one.

Sometimes an occupation became an individual’s surname. Smit=Smith; Schenck= cupbearer, Metsalaer= mason. An individual might be known by many different 'surnames' and entered in official records under these different names, making research difficult unless you're aware of the names in use.

For example, Cornelis Antoniszen Van Slyke mentioned above, was recorded in documents under the following names:

There are tremendous variations in spelling of these names, and changes from Dutch to to English record keeping in the New World affected the spelling even more. The English found the Dutch naming system of patronymics confusing and could not easily identify one family unit. Thus they ordered that all inhabitants must choose one surname to be used by everyone in that family. The use of patronymics in New York ended theoretically under English rule in 1687 with the advent of surnames, but not everyone followed the new guidelines.

For example, Albert Andriessen de Noorman's sons and daughters took the surname Bradt except for his son Storm. Storm was born on the Atlantic Ocean during the family's sailing to the New World and he adopted the surname Van Der Zee (from the sea) which is the surname his descendants carry. 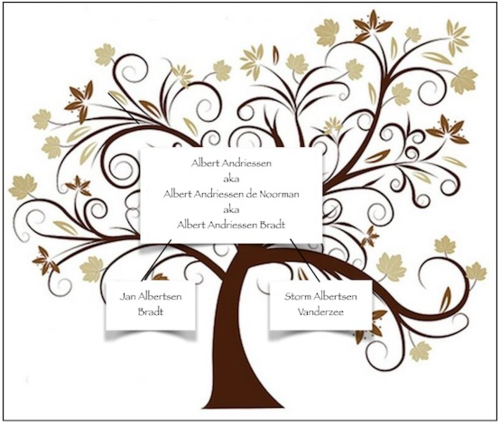 Another thing to look for in searching the early records is to be aware of the different ways names might be pronounced in different areas, or how clerks might write them down. For example, a boy might be registered as Jan "Kiek in 't Veld", and his father would sign with "Kijk in het Veld". "Kiek in't Veld" is how it is said in the eastern dialect, "Kijk in het Veld" is how it is said in proper Dutch. The father could write down it properly, but he couldn't say it properly. The clerk at that time may have come from the West and just wrote down what he heard without translating it. If you were searching such a family, you would have to look for both lines.

You also have to be aware of the diminutives of regular first names, because the patronymic might be formed from the normal name or its diminutive. For example:

Two articles that are excellent if you are trapped in the confusion of Dutch patronymics are:

My husband's ancestors, named GIERSBACH (and miscellaneous spellings of that surname) were listed as being from Prussia. Here in the United States the records of the 1750s the name was spelled KISHPAUGH. Would the naming patterns in this article apply to people from Prussia in the 1750s?

My daughter married into the VAN FOSSEN family. Traveling in Amsterdam area, I learned that surname meant Waterfall. I am also wondering if this name could have been from Amsterdam/Netherlands also.
Joan Middleton of Warrington, PA (Mid4Mid@Verizon.net)

I am not personally familiar with research in Prussia so cannot answer your question. This site might be of help to you

In the late 1700's, I discovered my ancestors changed their surnames from Jacobs and Coolen to Van den Burg. Crypto-Jews? I also discovered an unnamed African slave in my Dutch genealogy. That explains why one of my brothers can grow an afro and my uncles look Jewish. (we used to tease him calling him Zwarte Piet, after Saint Nicholas's helper.

Lorine, thanks for sharing this important (and complicated) insight to our Dutch ancestors. I too am a Bradt descendant through my grandmother Braudt (1890-1968). I got most of my lineage from Laurene Matthews Grimes' book, "Second Supplement to the Bradt Book", 2002 and the earlier works. My question is: Has your research made any corrections to Laurene's or Cynthia Brott Biasca's work, and if so, where can it be found? It's been a few years since I've worked on this line and it should probably be re-checked for correctness. Thanks again.