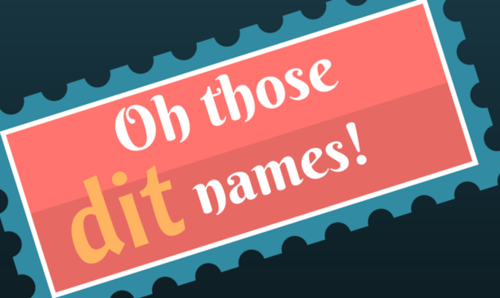 Have you experienced the problems genealogists can encounter when searching French ancestors who used dit names? A dit name is an alias or nickname, in essence a second surname, given to a family. This second surname can be used in place of the original surname or it can form a double surname. A dit name doesn't usually apply to one person, but to many members and generations of a family. Dit names are generally found in France and New France (present day Quebec) and can be very challenging for researchers.

The Dutch in New Netherland (present day New York) had something similar with their frequent use of nicknames to identify individuals. Those nicknames often became the established family surname after the English takeover and demand for standard surnames.

A dit name might be derived from any of the following:

For example I have an ancestor who settled in New France (present day Quebec) in the 1660s. His name was Simeon LeRoi.

His baptismal surname was LeRoi. His dit name was Audy or Ody. In contemporary records we might find him as

Compounding the challenge of finding ancestors who used dit names we also have changes from French to English, or in the case of my LeRoi family, French to Dutch. The LeRoi aka LeRoy surname underwent great changes, becoming LeRoy dit Audy or Ody, Audy and Ody in New France (Quebec). Simeon’s son Jonar left Quebec for New York where his name became Jonas Larroway (with variant spellings). Other changes from French to English were LeRoy in the United States and Canada.

Some of Simeon's sons assumed the Audy dit name as a surname and there are Audy descendants today who are from Simeon LeRoi. Some descendants use the LeRoy surname.

So what is the diligent researcher to do when it comes to entering such a name in a genealogy database? It is considered good practice to choose one standard way of entering the surname. It is equally important to record the name exactly as it occurs in each document you find. Your notes section comes in handy for this. As an example, for my Simeon LeRoi dit Audy, I might opt to use the LeRoy variation but I will record each name as found in various records. If, for example, I find a record with him recorded as “Audy” I make note of that.

It is also a good idea to consult Jetté, René, and Micheline Lécuyer, Répertoire des noms de famille du Québec des origines à 1825. (Repertory of Family Names of Québec from the Beginning to 1825). Montréal, Québec, Canada: Institut Généalogique J.L. et Associés, 1988. This book consists of a list of dit names and if your ancestor is found, it will give you the standardized surname in use.

You can also check for your ancestor’s name at the American-French Genealogical Society website as it contains a very complete list of French-Canadian Surnames:Variants, Dit, Anglicizations, etc. When I look up my ancestor’s dit name of Audy, I find it listed with Roy, LeRoy and Ody

Another place to learn about dit names and to check for your ancestor’s name is at the Family Names and Nicknames in Colonial Quebec website.

If at any time during your research you encounter a stumbling block of an ancestor whose surname seems to disappear, consider the possibility that he may have a dit name.

In dealing with French ancestors who came to North America. it is interesting to note that in addition to those settling in what is now called Quebec, there was another group of the immigrants who settled in "Acadia," largely in what is now called the Maritimes. In this regard, "dit" names were usually applied to the given name rather than to the surname as in Quebec. And were applied to the individual rather than the family group. So, Pierre dit Pinous and Simon dit LeMaigre LeBlanc, and Rene dit LeGroc Hebert are all dit names applied only to that person. These are very interesting aspects of Acadian culture, but far less confusing than the more common Quebec dit names.

Thank you for that explanation Tom! Good to know

Great advice!! Mine is Faubert dit Ferguson...Thomas Joseph 1821 Chatguay to 1894 Ogdensburg NY. I will definitely be saving this post, thanks!!!

Glad you find it helpful Penny!

The most extensive source about «dit names» in Québec is :