Getting Real with Naming Patterns

Genealogists have strong opinions. But are they always correct?

I've been following some online genealogy discussions recently and noticed that we genealogists often answer questions with an emphatic point of view. Very often the answer is an extreme leaning one way or the other, with no middle ground or room for a “perhaps…”

One recent discussion began after a seemingly simple question -- were there naming patterns for children in the 1800s in [fill in blank with any country].

Genealogists began to respond with their opinions. Almost all gave a simple YES or NO. Some provided reasons or rationale or examples to support their YES or NO stance. 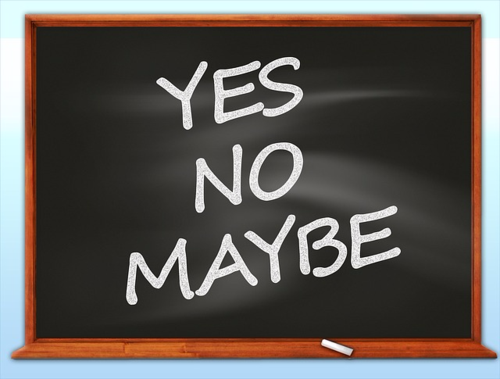 Let's get real! Naming patterns existed. That is correct. Historically parents often named a child in honor of a relative – father, mother, grandfather, grandmother, or other family member.

BUT…Were naming patterns identical in all cultures? No

Did all countries have strict naming pattern conventions? No.

Were existing naming patterns used by all families? No.

It's easy to forget that our ancestors were people like us. They fought, they loved, they cried, they laughed, they had good days, they had bad days, and they made decisions for many of the same reasons we make decisions – including what names to give their children.

Even if there were established naming patterns that were used most of the time, as is the case with the Dutch who settled in the 17th century in what is now New York, as researchers we must keep an open mind as to whether or not the customs were always followed.

Perhaps your ancestor fought with his father or mother and vowed to never name a child in their honor.

Perhaps your ancestor was a free spirit and loved the name Lancelot so broke with tradition even though the first born male in her family had been called James for the last ten generations.

Perhaps your ancestor wanted to cozy up to his rich great uncle so he named his first born son after that person instead of his father.... and gave his second born his father's name.

Perhaps the birth parents had died young and one of the spouses wanted to honor their adoptive parents.

If you find seven children in a family and six are named after known family members such as paternal grandparents, maternal grandparents, aunts, and uncles, then there is a good chance that the seventh was also named after a family member. However it’s important to remember that this is not guaranteed. The couple might have named that child after a good friend, or an important contemporary person, or a benefactor.

Let’s look at a different scenario. In your research you are trying to find the names of the parents of your great-great grandmother. You have a theory as to who her parents are. Then you notice what looks like a naming pattern of her siblings. This pattern fits with the parents you theorized are the correct parents. But one parent's name is missing from the pattern. What to do? That's not the time to toss out your theory! There may be a missing child, one whose existence you aren't aware of, or who died. That child may be the missing link, and may be named after that one parent who is missing from the pattern.

Think about this the next time you are tempted to accept an absolute and emphatic yes or no to the question “Do Naming Patterns Exist?” The editor of the New York Biographical and Genealogical Review told me once that absolute answers are never a good idea and that one should always leave oneself some “wiggle room”. In other words don’t back yourself into a corner by giving an absolute answer. There are often exceptions to rules.

So be sure you leave yourself some wiggle room next time you answer a question, and if you are the person asking the question, take absolute answers with a grain of salt.

Use naming patterns as a guide. That's all they are, they are not a set of rules set in stone.

Well, with all of the George Washington and Andrew Jackson [SURNAME]s I've come across, that's one type. With my great grandparents I came across a unique one, even in their church. I discovered it when I came across the Lutheran baptismal records of my oldest great uncles and aunts (my great grandmother was full-blooded German but third generation American from Illinois). All of the kids were given two middle names named after their sponsors. No one else on the pages of these records did that and I've not seen it anywhere else. I have seen many times kids named after friends, but I've never seen this two-named business before.
I also used naming patterns as a guide (because nothing is absolute in genealogy, as your article wisely points out) to discover my surname branches. My grandfather's middle name is Sylvester. His sisters' middle names are Sylvannah and Zilpha. I ran across a Clark line that has many people with variations of these same names. After working with others in this line, I discovered they had pictures of my great-grandfather and wills mentioning his name. This was quite a breakthrough since his father had died when he was an infant and he seemingly didn't know much about his family. But after doing more research, I found out he must have known quite a lot about his family based on census records (he was among them quite often and even related sparse information as far back as his 2ggrandparents), and things like these names because those names hadn't been used for quite a few generations. He just didn't talk about it in his old age to my grandparents (my grandfather was the youngest and his parents divorced when he was an infant and didn't see his father again until he was 34 years old).
I've also ran into the near ubiquitous Reese Wrights and Wright Reeses. These families intermarried quite a lot in many cousins of in my tree. In an 1850 and/or 1860 US census I even came across two of these, living next door to each other married to women with the same first name and several children with similar names and ages! Talk about confusing. I figured out (I guess) they were something like second cousins honoring each others greatgrandfathers and grandfathers (which also honored all of the Williams and Johns in their lines) all of which were Reese or Wright ancestors. In some of these lines, it was common for even third to fourth cousins (with respective grandparents and even great-grandparents) to immigrate to the same place using all the same names.
In my surname line, we've somewhat utilized the convention where the oldest son has the middle name that is the father's first name. I used it with my oldest son, and since I am the oldest, my dad with me. My dad was the oldest, but my grandfather was the youngest so it skipped there, but his oldest brother has their father's middle name as a first name. This middle name is again that father's first name but once again it breaks because he isn't the oldest. My brother reversed his names for his oldest son, so it is similar.

And sometimes the kids were named after saints who were popular at the time. Noticed a lot of my German-Americans being named Leo after the death of Pope Leo XIII in the early 20th century. Or after political figures. Such as my Irish-Americans having the name of Robert Emmet or just Emmet.

My family followed the Irish naming pattern - paternal grandparents, maternal grandparents, parents, for the most part. There are exceptions. I've found the maternal grandfather's name used first, in one case he was a "large farmer" more prosperous than the paternal grandfather. My grandmother never named a son after her father because he deserted the family. I also found it puzzling that my great grandmother did not name a daughter after her mother, but eventually found she did, the child died at 15 months. The first generation in America used the naming pattern, the 2nd used family names for the most part, but not all in the usual order. Georgia: Interesting you mention Robert Emmet - my grandmother had a cousin whose middle name was Robert Emmet, his brother's middle name was Wolfe Tone and another brother was George Washington. This was the early 1900s, George and another brother fought in the Irish Revolution and were career officers in the Irish Army - no surprise there.

All of the kids were given two middle names named after their sponsors. No one else on the pages of these records did that and I've not seen it anywhere else. I have seen many times kids named after friends, but I've never seen this two-named business before.

My wife's mother b. 1910 in Wisconsin had 2 middle names as did he many brothers and sisters. They were all several generation Lutheran from Prussia and in looking at most of both sides of parents, grand parents & GGP most had 2 middle names (the rest may have had them but I have not discovered that).

Very often when you see a name that has two middle initials, those are names of prominent religious, political or military people. In my own family I see several generations along different lines of descent using the names Phineas Paxton either as given names or middle names; Phineas Paxton was notorious during the Revolutionary War and is someone to whom we are related but not directly. So possibly a streak of Tory in the family.

Many local or nationally prominent ministers turn up in the middle names.

And these are families who in many cases otherwise followed a typical naming pattern (and the particular naming pattern itself can be a good clue as to the nativity of the family's forebears).

And then there are ALL the Georges named after the King during the reigns of the four Kings George in England. Oh, for a familial naming pattern there.

In Newfoundland it was very common to use the clergyman 's name as a second or third name. My own grandmother, second daughter of a second marriage was named after her father 's first wife, and her second and third names were for the clergyman's wife"

Two quick comments:
My husband's grandfather, George Moran Whitmore, was born shortly after the Civil War, in which his father had fought. I've wondered if George Moran was a fellow soldier whom his father honored, it's not a surname found in the family.
The furthest back Whitmore in our records is Francis, b. 1623 or '25 in England, who emigrated to Massachusetts in the 1630s as a boy. We cannot find proof of the identity of his father, who some say was John and others say was Nicolas. Many generations of Francis's descendants had sons named John (22 of them, usually first sons) and Francis (20 of them), but in the subsequent 391 years, there hasn't been a Nicolas (that I've found). It's an interesting clue -- but I'm searching for Francis's birth/baptism record!