We will never know whether U.S. Naval Reserve Yeowoman Mary Agnes Monahan, killed tragically in an auto accident on 5 Sep 1918, saw herself as a vanguard of progressing women’s equality in the United States.[1] Regardless, she and the handful of women who enlisted in the U.S. Naval Reserve during WWI would change American military culture permanently, forcing the government to officially recognize women as able to serve in the Armed Forces. 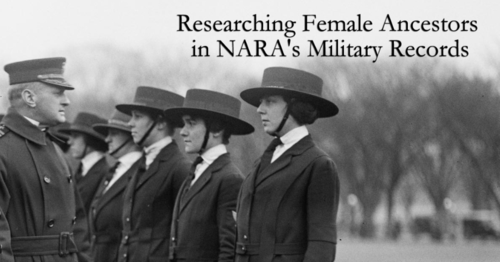 Americans traditionally think of men running the government and holding civic positions, as well as putting their lives on the line for freedom. As highlighted here, pertinent collections at the National Archives can provide more information about your female ancestor and how she contributed to the war effort.

Many women stepped up to the plate and took care of family affairs while their husbands were on active duty. Ironically, the first NARA collection I want to highlight isn’t service records of female ancestors, but rather documentation related to female ancestors in pension records for U.S. Veterans.

Acts authorized by Congress allowed for soldiers to receive pensions based on certain eligibility requirements. If the veteran were to pass away, his widow could reapply for a pension. In her dispositions, the widow would provide important information useful to genealogists such as her maiden name, residence, marriage date and place to deceased husband, and the date/place of her husband’s death.

Fold3.com has digitized copies for Pensions and Bounty Land Applications from the Revolutionary War and War of 1812. While Fold3 also allows you to search pension index cards for later conflicts, copies of the full pension files for veterans of the Early Indian & Mexican-American war up to 1912 are only available at Archives I in Washington. Copies of pension files can be requested from the National Archives using the NATF Form 85.

The level of atrocity and casualties on Civil War battlefronts warranted a great need for female nurses. Individuals researching female ancestors that were hospital attendants, matrons, and nurses during the Civil War, can consult Record Group 112, Records of the Surgeon General (Army). This record group contains a series of service cards for females enlisted at hospital stations to take care of the wounded and dying. The cards are arranged alphabetically by surname and include information on place and dates of employment, salary, and the capacity in which hired.

Service cards, returns, and appointments of nurses in the Spanish-American War, 1898-1939 can be found in Record Group 112. RG 112 also holds papers of hospital stewards, 1862-93, arranged alphabetically by the name of the steward. These papers contain orders, correspondence, discharges, and personal reports of the stewards. Additional information about women serving in medical capacities for the military can also be found in Record Group 94, Records of the Office of the Adjutant General.

Females who enlisted in the U.S. Military

Before WWI, the only women enlisted in the U.S. Military had to disguise themselves as men. Under the Naval Act of 1916, females found a legal loophole in which they could enlist in the military, because there was no clause barring females from enrolling in U.S. Navy Reserve.In 1917, the Bureau of Marine Inspection & Navigation allowed for the inclusion of personnel who could serve in a non-combative capacity, such as “radio operators, stenographers, nurses... and many other capacities in the industrial line.”[2]

Several hundred women, such as Mary Agnes Monahan, became yeowomen and were stationed at U.S. Naval Bases during the WWI. From this point forward, attitudes towards women’s involvement in the military changed greatly. During WWII, over 350,000 women served in the U.S. Armed Forces in five different capacities:

Women who service in the Marines and Coast Guard (SPARS)

A great deal of information related to a female service member’s occupational history is held in their Official Military Personnel File (OMPF). Copies of OMPFs can be ordered from the National Personnel Records Center using the Standard Form 180. Additional history about a veteran’s involvement in the military can be gleaned from online collections and files on Ancestry.com and Fold3.com. For information on women serving in the Cadet Nursing Corps consult, WWII Cadet Nursing Corps Card Files, available at Ancestry and Fold3.com. These cards provide the nurse’s name, location and length of service.

Historically, the U.S. Government’s work force is one dominated by men, but overtime, thanks to the women who were courageous pioneers not deterred by the status quo, they made their way into jobs traditionally reserved for men. The National Archives holds records documenting the appointment and service of federal government employees who served in military affiliated government bureaus. If you are research a federal employee, the first important step is for you to do some personal research to help narrow in on what department she served under and her years of service.

The National Archives holds Official Personnel Folders for Civilian Government Employees from 1850 to 1951. Requests for these files can be made by writing to National Archives and must include some basic information for an archivist to locate the file.[3]

Do you have any women in your family who served in the military?

[2] Nathaniel Patch, “The Story of the Female Yeomen during the First World War.” Prologue (Fall 2006), Vol.38, no.3: accessed at http://www.archives.gov/publications/prologue/2006/fall/yeoman-f.html

Archives Library Information Center. “Women.”: accessed at http://www.archives.gov/research/alic/reference/womens-history.html. This is a great list of resources for learning more about the history of Women in the United States.