How Mobile Were Our Ancestors? 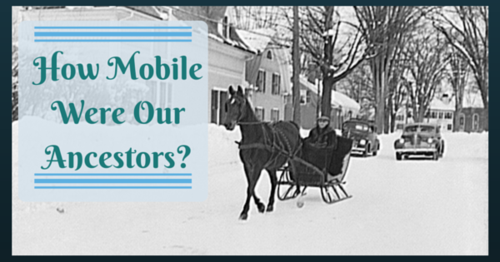 Do you think your ancestors stayed in one place? Guess again! A prevalent myth among genealogists is that our ancestors could not, and did not, travel freely.

The truth is that many of our ancestors traveled frequently. They were much more mobile than most of us realize. When you look across the centuries, you can find examples of our ancestors’ frequent trips in times when travel was difficult, slow, and often expensive.

While it may be true that our immigrant ancestors returned home more frequently in later centuries, after ships’ travel became faster, easier, and less expensive, we should not assume this is the case. I have found many 17th century immigrant ancestors who frequently sailed back and forth from their new land to their homeland.

Even though they could not simply hop on an airplane as we do, many of our 17th century ancestors didn’t hesitate to make the long journey home many times. I suppose it should not be surprising when we consider the fact that these early pioneers were willing to leave friends and family to settle in an unknown wilderness. 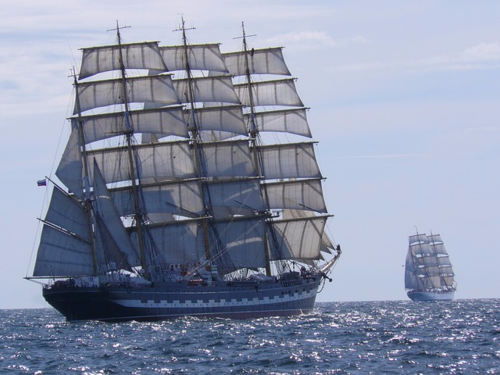 Many early settlers in the New World of North America travelled frequently back to Europe. Several of my Dutch ancestors who settled in New Netherland (present day New York) as early as 1630 returned to Holland on more than one occassion. Often they sailed back to settle wills or collect an inheritance from a family member. Sometimes they took a ship back to visit relatives or attend a wedding, just as we do today. Legal matters were also of importance and those were often the reason for a brief visit to their homeland.

Of course there were also individuals who might not be permanent settlers, but who travelled frequently due to the nature of their occupations. Soldiers, beaurocrats, sailors, and those with business interests were often among those non-settlers who made frequent trips from their homeland.

Many years ago I had the privilege of reading original letters sent in 1839 and 1847 from my great-great-grandfather to his mother in Illinois. In one letter he tells her how much he misses her and his siblings, and how he plans to come for a visit in the fall.

I remember how surprised I was when I read that my ancestor lived in the wilds of what is now Ontario, which then was a newly settled country, and little more than a wilderness. There were very few roads, and no reliable method of ground transportation other than horse and wagon, only a horse, or by foot. From his home in Ontario it was over 500 miles to his mother’s home in Illinois.

Since great-great grandpa did not own a horse, it is likely that he planned on hitching a ride in a wagon going from his home to a larger center such as York (now Toronto) or Hamilton.

From there he could have taken a boat across Lake Ontario and then to Buffalo, but it is more likely he took a wagon directly to Buffalo. Once in Buffalo a boat would have taken him along the shores of Lake Erie, or he could have continued his journey by wagon. I’m quite sure he would have walked for much of the journey. At some point he likely took a raft down the Ohio River to his mother’s home in Illinois. To me that seems like an arduous journey and not one I would want to take, but the mention of his plans in his letter was casual as if it were not an unusual thing to do.

Lack of work also took our ancestors far from home. If a man could not find a job to support his family, there was nothing stopping him from travelling long distances if he heard that jobs were available elswhere. One of my Irish ancestors who left Ireland during the Famine Years to settle in Canada, left Canada for work in Colorado. His family stayed behind in their new home and he spent several years working far from home. It appears from records that he returned for visits now and again.

With the explosive expansion of the railroads in the second half of the 19th century, people became more mobile than ever. Suddenly travel was easy and inexpensive, and people from many walks of life were now able to travel for work as well as for pleasure.

We should remember that our ancestors were no different than we are. They laughed, loved, cried, celebrated success, mourned over loss and failure, and missed family far away. There are numerous reasons they travelled, and we should always keep in mind that they were not stuck in one place – they travelled as needed, and when they wanted to.

What tales do you have of your traveling ancestors?

My 4th great grandfather, Micajah Lindsey, between 1800 or so and 1840, moved from Rutherford County NC, back and forth between there and Spartanburg County SC a few times, then west to Kentucky, then Tennessee, then Alabama, before finally settling in northeast Mississippi. Some of his brothers made the same or similar trek, and their father had moved from Virginia to Surry County NC, then Rutherford County NC, and then Spartanburg County SC.
No wonder I'm comfortable with having moved from one state or city to another at least 18 times (so far) in my own life, and will probably eventually move once or twice more before I'm done!