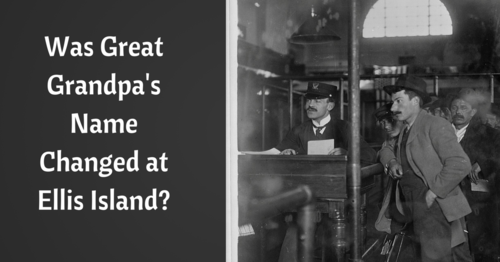 "My great-grandpa's name was changed at Ellis Island!" How often have we genealogists heard this statement? Sadly, this is a commonly held misconception. There is not one shred of evidence to support the claim that officials changed the names of immigrants arriving at Ellis Island.

Officials not only did not have the time to start assigning new names to incoming passengers they didn't have the authority to do so. 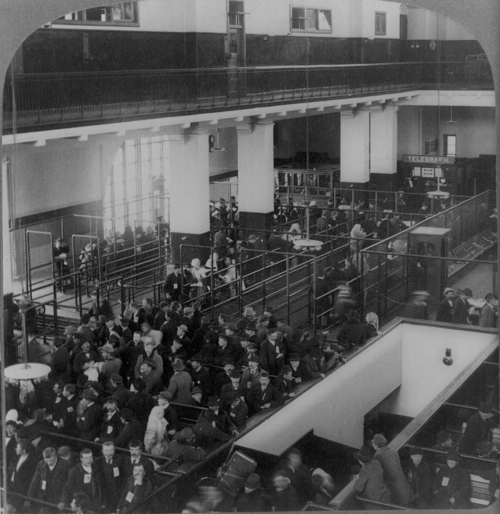 Sometimes an arriving immigrant used an incorrect name such as the surname of a stepfather rather than the biological father, or a name the family had adopted for other reasons. It is also important to remember that names of passengers were taken at the port of departure. These were entered on the ship’s manifest (which we commonly refer to as a passenger list). How the name was entered when the immigrant left their country is how the name was received at the incoming arrival port.

Sometimes an immigrant deliberately falsified their name and arrived under the name of someone else. Often these falsified arrival names were changed by the immigrants themselves later in life, such as when they applied for naturalization papers, or some form of pension, or they wanted to vote in elections.

If an immigrant's new name did not match that shown on their official immigration record such as a ship's passenger list, he or she might face difficulties voting, in legal proceedings, or naturalization.

One of the most common reason that an ancestor's name on the manifest does not match the surname your father and grandfather have used, is that it was a name unfamiliar to English speaking clerks, and was entered phonetically in other documents, such as census records. For example the surname Przybyszewskl is not only challenging for North Americans to spell, but also to pronounce. It can easily be incorrectly recorded and eventually may become the standard and new name.

Sometimes an immigrant chose to "Americanize" their surname themselves and simply began using a new name a year or so after settling in America. Americanizing a surname usually meant making it more familiar to English speakers and spellers. Many of these Americanized names were simply shortened from their original version, for example Kohnovalsky could become Cohn.

First names can also be inadvertently or intentionally changed by the immigrant himself or by a clerk recording the name phonetically. My husband’s Belgium born great grandfather’s name was Archie. Or so we thought. But baptism records in Belgium proved it was Achilles, which is pronounced Aw-shee. That sounds like Archie and so he became Archie to his friends in his new land of Canada.

Names in other countries and non-English languages are often changed to their English equivalent. My sister’s father-in-law was baptised as Waclaw in Poland. He is found under that name on his 1927 passenger list. But one year later he was recorded under the English equivalent of Walter as he crossed the border from America to Canada.

Another reason why an immigrant’s name can be different than his birth name is when a nickname was the name given by the immigrant himself. My grandmother’s original legal name was Ruth, but her family called her Dolly. She gave that name on official records but it was her decision, and was not arbitrarily assigned to her by immigration officials. My husband’s grandfather was Leon Thomas but he was always called Charlie and was the name he used on all official documents.

Below are some sample letters representing typical cases of immigrants who made their own decisions to change their surnames.

My family were (still are) Shirrefs. It wasn't until I went to the Scottish highlands myself and heard the name pronounced that I understood the many different spellings.

A distant family member of mine was Azweerus Hagedoorn from the Netherlands. 'Azweerus' is the Dutch form of Greek Ahasveros, a name that's found in the Bible. In the USA he was called Ayrus, and his family name was somewhat anglicized to Hagadorn.

Remember that the British in Ireland changed surnames, sometimes by translating eg Shanahan became Fox, McGowan became Smith. In addition, Irish prefixes were dropped or modified. O (fada) became O' -- if it was retained. We have examples in our Australian family tree. Cuskelly was spelled in the immigration records (Sydney NSW) as Quiskelly. The maiden name of my Doherty great grandmother was recorded as Niel on arrival but in later records is shown as O'Niell

My Great Grandparents had the name of Larsson (he was the son of Lars) in Sweden, which became Larson in the U.S. But sometimes he used the last name of Fahrm in Sweden. He would use it occasionally in the U.S. but it would be spelled (on Census forms) as Ferm or Fharm. He had begun to use Fahrm all the time, by the time he died, around 1919. So when we look back, we've got to look for a list of last names....all for the same people.

I agree with most genealogists, that Ellis Island didn't change the names of immigrants, but there is at least one documented exception.

The book, "American Passage: The History of Ellis Island" by Vincent Cannato, talks about the case in greater detail, but here is the gist.

It seems a Mr. Frank Woodhull arrived in Ellis Island on October 4, 1908 and was suspected of having TB. He was pulled aside and asked to undress by the doctors. Mr. Woodhull demurred and said "he" was a woman and had been passing as a man for years. A matron examined him/her and sure enough, he was a she.

No TB was found and the immigrant was admitted as a female, Mary Johnson.

Searching Ellis Island records for Frank Woodhull draws a blank, but there is Mary.

A better search is to use Ancestry.com. It has the images for both the Ship Manifest and the "Record of Aliens Held for Special Inquiry." Line 17 on the Ship Manifest shows Frank Woodhull crossed out and Mary Johnson written in.

Thanks for that interesting story Richard! But I disagree with your conclusion that the name was changed at Ellis Island which implies that the officials randomly changed a passenger's name.

The passenger's name was changed because she lied at the departure port but confessed with the truth (her actual name) and the arrival port of Ellis Island.