FindMyPast has been known as the leader for genealogy in the British Isles, but with their recent announcement of their addition of 100 million United States marriage records, they are beginning to attract attention from this side of the pond as well - including mine. In February they published the first 33 million of these records, and just this week they announced the availability of the next 10 million records.

After my recent successful experience with uploading part of my tree to FindMyPast for the first time (see it again in the after-webinar party here), I thought I would start over and this time upload my entire tree. I was hopeful that the same green hints that appeared for my small tree would begin to appear for the U.S. side of my tree, thus alerting me to those ancestors it found in the new marriage record collection. The entire uploading process took a little less than an hour (not bad for having 23,540 individuals in my tree), yet a couple of days later the hints have not yet started to appear. Perhaps the reason for the delay was that my tree was so large. I'll keep checking back.

In the meantime, I am anxious to begin searching the new marriage records, of which sixty percent have never before been published anywhere online. My first step was to query my Legacy family file to see which married couples had incomplete information about their date or place of marriage. Astonishingly, there were 8,301 individuals who had no place of marriage recorded. Many of them had partial or complete dates, but no marriage place. Blank! Wow, could I ever use this new marriage collection. Here's how I created the list in Legacy.

1) At Search > Find I filled in the following information:

Notice that I left the "What to look for" field blank. This would give me a list of all individuals who were married, but didn't have a marriage place recorded. 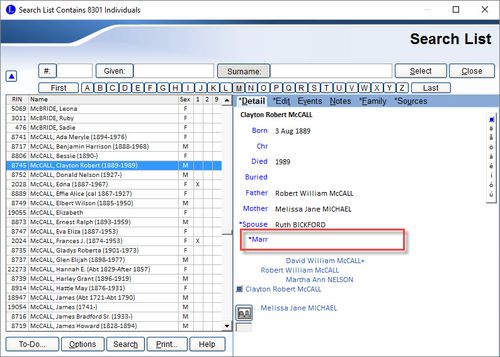 Notice here that Clayton Robert McCall's marriage information is completely blank. I simply haven't previously found the record. This list can then be printed to paper or to PDF by clicking on the Print button. And for you advanced Legacy users, I could also TAG everyone in this list so I can quickly refer back to them again.

I thought I'd give the new marriage collection a try by searching for Clayton and Ruth's marriage record. His parents were from Tennessee but moved first to Hancock County, Illinois and then to Yamhill County, Oregon in the 1860s. So these were three potential places they could have married.

Next, at FindMyPast.com, under the Search menu, I clicked on the "A-Z of records sets" link. 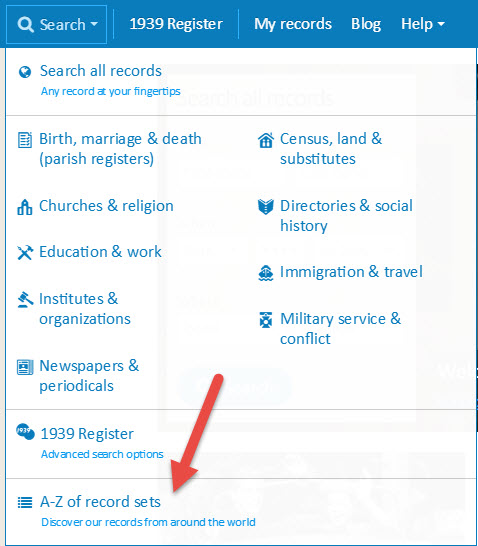 Then I typed "United States" into the Search box which narrowed down the list of collections, and clicked on the "United States Marriages" link. 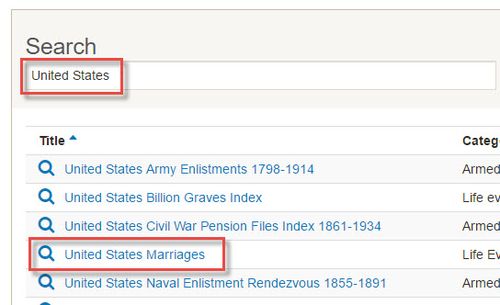 Knowing that Clayton McCall was a fairly uncommon name, I entered only his name and clicked the search button. 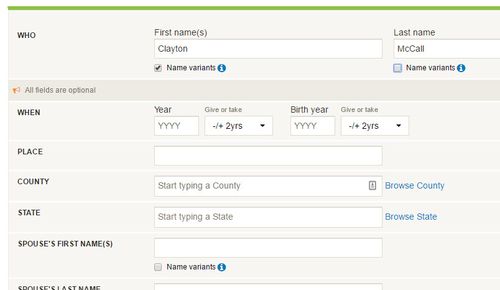 Of the 493 results, numbers 4-6 have a Clayton R. McCall married to a Ruth E. in Yamhill County, Oregon in 1915. Even Clayton's birth year as shown in the index matched my records. Getting exciting! But then, I get excited for ANY new record I find, have you ever noticed that? 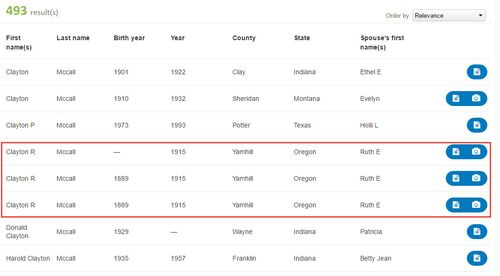 The first of the three records was a digitized image of the county's marriage index:

The next gave their marriage date and ages:

And the last entry was the same as the second, but it appeared to be the index sorted by the bride.

So...I was hoping for a copy of the actual marriage record (makes me sound a little spoiled, eh?) but at least now I have the date, volume, and page number so I can request a copy of the original. I'll go add a new To Do item in Legacy for this task before I forget: 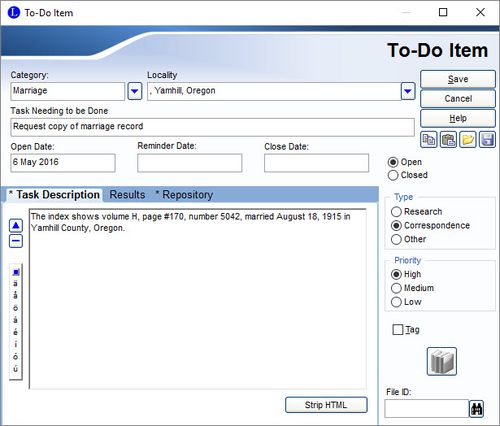 One down, 8,299 to go. It looks like my relationship with FindMyPast is going to get a lot closer in these next few months. And that sleep I was hoping for - well, that can wait.

Is there a charge for Find My Past?

The full world-wide subscriptions for both Ancestry & FMP are too expensive for me... so, I alternate annually.