Is It A Match? Ways to Correlate Evidence and Identify Ancestors 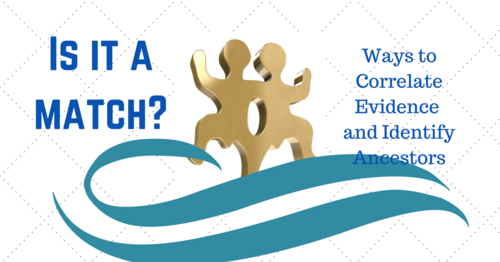 Throughout my journey as a genealogist, I have learned the importance of exercising caution. Using caution means not publishing information about the identities of families and individuals unless we are confident that this person matches the profile we have gathered through previous research and have eliminated other theories about who this person could be. There is always a great temptation to do the genealogy happy dance at the moment of discovery, but in most cases, a match should remain tentative until the evidence shows beyond a reasonable doubt that a match has been made and can be added to our family tree.

The facts that our most often correlated or matched in genealogical research consist of three categories: names, dates, and locations. A fourth category could be reserved for other details such as occupations and other anecdotes about that person passed down through the generations. Collectively, these sets of facts are what we use to compare to other sources to determine if we have made a match.

Tools for organizing and analyzing research

Timelines are an excellent tool for analyzing sources and the genealogical profile of an individual. Most family tree programs, such as Legacy, offer a timeline feature. You can also start a table in a word processor or spreadsheet program for entering your data. Timelines can be utilized for comparison and correlating information, evidence, and sources. In two individuals with a the same name, a timeline can be utilized to demonstrate the separate identities of individuals or on the flip side, to demonstrate that the two seemingly different people are in fact the same.

It may also be useful to create a table comparing sources, which provide information on the same fact, such as the year of birth. Ancestors, their informants, or the authors of published works may give different answers as to where and when such events occurred. Putting together a table that compares sources and information allows researchers to notice possible outliers or less reliable sources, because they came from an informant many years after the event occurred and are thus more susceptible to error.

Many records are online, but many of them provide partial information compared to what’s available. The index only serves as an abstract of the full record, such as index volumes for vital records, which provide the name, date and location of the event, with the volume and page reference to the original records. Our intuition can certainly lead us to the idea that this could be a match, but we need to pull the original record to get confirmation. The original birth record or entry in the register will usually include more details, like the occupation of the father, the mother’s maiden name, address, and specifics we need so a full comparison can be completed with the facts that have been collected.

Negative evidence is essentially the absence of a particular name or individual in a source. It’s useful because when researchers are to be confident of their matches, it helps to prove this person isn’t being mistaken for someone else. For example, in order to prove that my great-grandfather’s brother Arthur Edward Fleischhauer was the same person as Arthur Edward Allen, I had to demonstrate the similarities in their genealogical profile, but also prove that this couldn’t be mistaken for someone else.

Arthur Edward Fleischhauer was born 25 Mar 1900 to German emigrants Franz and Meta (Rankin) Fleischhauer in Brooklyn, New York.[1] He enlisted in the Marine Corps during WWI and lived with the Fleischhauer family according the 1900 and 1920 US Federal Census.[2] Arthur left the Fleischhauer family in the 1920s and by the 1930 Census is living as Arthur Allen and married to his wife Dorothy de Blois Bogart. Of the available in the 1930 Census, the three pieces of evidence that indicated a match was that his age in the census would have made his birth date 1900, both parents were born in Germany, and he was a veteran of WWI.[3]

I had to search all the census schedules between 1900-1940 to locate any other men named Arthur Allen that could fit the profile and then locate their records to see if they have correct the date. The gravestone of Col. Arthur Edward Allen states he was born 25 Mar 1900, but no Arthur Edward Allen is born 25 Mar 1900 in New York according to the birth indexes and no men of this name enlisted in World War I according to draft registration cards.[4] This is a short example for demonstration purposes that negative evidence, along with the correlation of similarities, helps to build an argument proving that two individuals are one in the same.

How close of a match does it have to be?

The problem is that in genealogy, we are not always handed a 100% match, there are discrepancies concerning a person's facts in the sources we collect. Sometimes there are larger discrepancies, such as of three major pieces of information in a genealogical profile: names, dates, and location. Individuals may have used a certain alias or alternated one of their given names as their first name. Dates are even shakier because our ancestors may not correctly remember the birth date. They may also enact leniency on their true age, so they state they are younger than they actually are. Of these, the one part of our ancestor’s profile that is the most important is the location. Our ancestors could not clone themselves, so while they could change the facts about their life to assume a new identity, it’s very hard to discredit evidence concerning location. One could argue this if their ancestor appears in the same census schedule twice, which happens rarely, but in nearly every instance, our ancestor had to be in one place.

The more these techniques are put into practice, the more it becomes a part of the researcher’s intuition. It is a great exercise in analytical skills to survey and correlate all of the facts, thus training the mind to look for these clues and better understand these sources. Furthermore, being cautious and keeping our matches tentative until proven better serves the genealogical community, because when we put this information online, we know it’s going to be copied and pasted and thus spread like wildfire.

Jake Fletcher is a genealogist and blogger. Jake has been researching and writing about genealogy since 2008 on his research blog Travelogues of a Genealogist. He currently volunteers as a research assistant at the National Archives in Waltham, Massachusetts and is Vice President of the New England Association of Professional Genealogists (NEAPG).

"Being cautious and keeping our matches tentative until proven better serves the genealogical community, because when we put this information online, we know it’s going to be copied and pasted and thus spread like wildfire."

That's the fault of the copiers, not the original researchers. Why must we keep our ideas hidden? Research will never advance this way. Theories are important, especially when proof is extremely difficult. They provide clues and direction. I believe that it is acceptable to publish or post tentative conclusions as long as relevant sources and clearly written reasons are given. Those who copy the information without referencing the full context are, to me, the ones who are truly cause the problem. Just my opinion.

I agree with you and I'm not advocating that people hide their research. People should share their proof arguments and theories with others. As I stated earlier, the evidence doesn't always fit perfectly. I'm just advocating for more thoroughness so people don't post poor, undocumented genealogical research, that's all.