How did your ancestors experience the effects of railroads in America? The introduction of steam locomotives into American commerce and daily life in the 19th century changed the way people would experience their nation and its landscape. For many, the advent of steam locomotives and completion of major projects like the Transcontinental Railroad in 1869 represented the American idea of manifest destiny. Completing a transportation system that spanned from one coast to another signified that America fully commanded its land, able to utilize it as much as was desired for the nation’s prosperity.

However, achieving manifest destiny and propelling commerce into the future was rarely accomplished without the cost of human life. The construction of the Hoosac Tunnel in Berkshire County, Massachusetts took 195 lives and injured countless more from accidents and explosions.[1] Even riding the railroads was risky business. On Sep 8, 1894, an accident in the Hoosac Tunnel claimed the lives of William Terpinning of Syracuse, New York and George Minnick of Fitchburg, Massachusetts when a miscommunication by the track signalman resulted in a head-on collision between two trains.[2]

Finding records of railroad employees and particular incidents can be difficult. Researchers need to know the company for which they worked, the dates of service, and some basic genealogical information, in order to be certain of whether records survive. Railroads were not heavily regulated until the 20th century and the transient nature of workers means that early records do not often survive. With that said, there are many resources available for finding more information about railroad personnel and this article intends to break these down for the purpose of the genealogist. 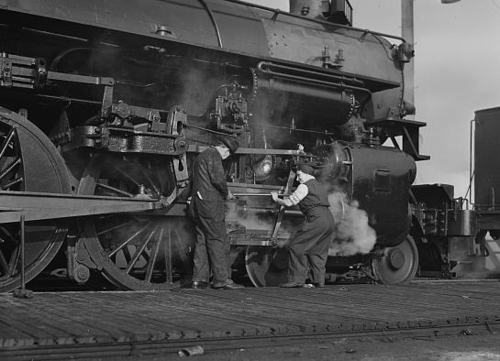 Railroad Records in the National Archives

Records related to railroad personnel are located throughout several record groups in the National Archives. Those that are most valuable to the genealogist would have to be the pension files for retired railroad workers. The first federal railroad retirement system was created in the 1930s to repair the defects of previous pension programs put in place by the private sector. At first declared unconstitutional, Congress created an agreeable railroad retirement system under the Railroad Retirement and Carriers’ Taxing Act of 1937. This congressional act put the system under control of the Railroad Retirement Board and allowed employees to retire with benefits after the age of 65 or between 60-64 if they had served at least 30 years. Later amendments in 1946 and 1951 allowed for survivor benefits and annuities for the spouses.[3]

These files can vary greatly in size, from 20 to 200 pages, but the genealogical information is substantial. A researcher could find the following information:

These claim files equal genealogy gold. How does a researcher check to see if a claim file exists for a particular individual? Claim files held by the Railroad Retirement Board only exist from 1937 to the present day, so the individual in question must have retired or deceased after 1 Jan 1937. Fortunately, there is now an online index for these records through the Midwest Genealogy Center. The index will provide researchers with the surname and initial of the forename, the date of death, claim number, and which repository holds custody of the file. Most of the claim files have been transferred from the Railroad Retirement Board to the National Archives at Atlanta. For a firsthand perspective, I recommend checking out Debbie Mieszala’s article "All Aboard! Railroad Retirement Board Records" on the Advancing Genealogist blog which describes her experience in using a claim file for genealogical research.

Other sources of genealogical information can be gleaned from NARA Record Group (RG) 134, Records of the Interstate Commerce Commission (ICC). The ICC was created in 1887 to more effectively regulate the railroads and investigate safety concerns. RG 134 actually contains some information on non-railroad personnel through the land acquisition forms, 1914-1939, valuation maps, and land field notes of ICC appraisers relating to the current value of real estate adjacent to railroad rights-of-way, 1915-28. These sources provide the names of people who owned parcels of land adjacent or on the railroad right-of-way at the time of the company’s acquisition.

RG 134 also contains railroad accident investigation reports, but only starting in 1911, because the Federal Government was not involved in railroad accidents until Congress passed the Accident Reports Act on 6 May 1910. An individual who endangered themselves to save lives in a railroad accident may have a Medal of Honor case file in RG 134. These run from 1905 to 1955. In 1967, the function of railroad accident investigations was transferred to the Office of Safety, Federal Railroad Administration (Record Group 399). Reproductions of these investigative reports up to 1994 can be viewed online through the Department of Transportation (DOT) website, in which they are organized by year and then by the railroad company which owned the train involved in the accident. For incidents prior to 1911, researchers should try newspapers or court records to find out more information about a particular incident, as many filed claims against the railroad companies and employees were tried for reckless endangerment, manslaughter, or homicide.[4]

A lot of railroad history and information involving particular incidents remains scattered throughout Records of the District Courts (Record Group 21). District Court proceedings are held by the regional branches of the National Archives and those pertaining to railroads consist of civil cases involving racial discrimination, working conditions, retirement benefits, claims for damages to property, injuries and deaths resulting from railroad incidents.[5] Below is the indictment of John L. Williams, in which Williams was found guilty for providing false information in his claim for retirement benefits. 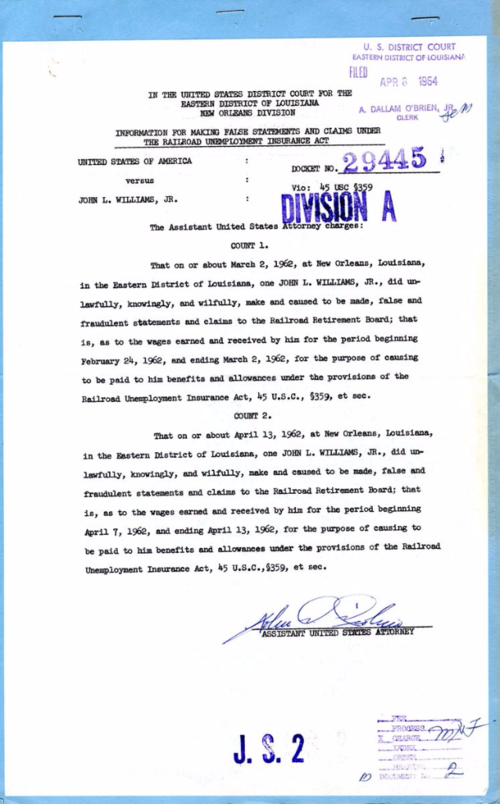 Beyond the National Archives, records of railroad employees remain in the custody of dozens of local archives. The personnel listings are incomplete at best. I highly recommend downloading Jim Sponholz’s guide entitled "Locations of Railroad Genealogical Materials." This guide explains what employee records survive for each company, the dates they span and which repository has custody of these records or whether an online index exists.

Many companies and even employees published magazines that chronicle a great deal of history about the railroads in the United States. They often include lists of current employees, detailed life histories of retiring employees, and information on the day-to-day life on the railroad. Jim Sponholz’s Rootsweb page is the authoritative source on the whereabouts of these magazines, as they are once again very scattered. Some publications are digitized, like the Journal of the Brotherhood of Locomotive Engineers, available on Google Books, and the Frisco Railroad magazine, through the Springfield-Greene County Library. Better yet, some institutions have even put together name indexes for their company magazines, such as the Boston and Maine Railroad Historical Society.

The railroads touched the lives of their ancestors in many ways, sometimes very tragically. Is there a story involving trains or railroad employees in your family tree? Depending on the time and place in which your ancestor was involved with the railroads, you may very well be riding a long way on the paper express to genealogy gold.

Thank you for this information. I have numerous ancestors who worked for the railroad. Unfortunately, most of them were pre 1900. Of specific interest to me would be records pertaining to my great grandfather, Robert L. Bowden. He died in 1906 in Pennsylvania, while seeking work, I presume, on the railroad. I would love to know if there were any Railroad Records pertaining to spousal claims. However, in reading this article it seems as if there would be none. Anyway, I appreciate the information you have provided and will keep it for future reference.

The Pennsylvania State Archives in Harrisburg PA has railroad records. I am hoping to tap into them to find information on my grandfather's 1921 accident. I don't have the exact date so I expect it will take a lot of time to do the research.

Susan, Consider checking Newspapers for your Grandfathers Railroad accident. This was news at the time. Consider the New York Times Historical to which many libraries have on-line access.

Thank you for this information. There are 2 collateral relatives 1) involved in an accident as an employee of a railroad line, 2) another who was a conductor for many years in New York state and the information I found for the railroad he worked for let the world know they have not names of past employees. I hope your info will help me find their information.

Quite a few members of my family worked for the railroads during the depression and especially during WW2- when women did the same work as men (the norm was less pay, but not always- yes there's a story there). No accidents, no injuries, and nobody worked for the railroad long enough to retire. Mostly they did cleanup, repair, loading, supplies, and often their jobs were as needed, though some had steady work. They got free travel as long as a service member didn't need the space, but not much else in the way of benefits. I have some interviews with some of my family members, but I don't know if there are records of their employment or information about their relatively short-term jobs. Something to look into.

I'm looking for the railroad log or a newspaper story to document an incident on a train from Chicago to Lawrence, Kansas in late 1871 or early 1872.
The family lore story is that my great-grand aunt, Dr. Elizabeth Avery, after her practice burned in the Great Chicago Fire of October 1871, headed west on the train. A man on the train took ill and the conductor summoned a doctor. Being a female doctor she was reluctant. On the second call she stood to help the man, a business man named Frederick Eggert.
They ultimately married, in 1873 in his home town of Lawrence, Kansas. Fred and Elizabeth Eggert eventually came to Oregon and were movers and shakers in the late 1800s-early 1900s western Oregon history.