Get ready for the 2016 Webinar Subscriber Summer Spectacular! 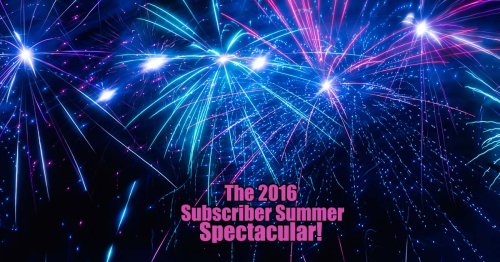 It's our way of saying thank you to our webinar subscribers!

This summer we will not only have new members-only content, we will also have full in-depth series to help you take your genealogy to a new level.

We'll be sharing with you five new members-only series, released every two weeks, throughout the summer of 2016.

Here's an overview of what you can expect:

Ireland's best-known genealogist, John Grenham, brings us the most comprehensive introduction to Irish research available online. John is the author of the genealogical standard Tracing Your Irish Ancestors. John gets you started with your Irish research in an approachable way that will take the mystery out of researching your Irish ancestors.

Getting Started with Microsoft PowerPoint

If you enjoyed Thomas MacEntee's Microsoft Word series, you will love his new PowerPoint series. Thomas will take you through the steps of learning to use and make use of PowerPoint the right way. After you take this series of 10 classes, PowerPoint will make sense and you will be comfortable using it.

DNA is a hot topic in genealogy right now but it can be a bit confusing to learn how it works. Unfamiliar with DNA? Not a problem! DNA expert Blaine Bettinger starts from the very beginning and helps give you an understanding of DNA so that you can apply it as a tool to your genealogy research.

You still have time to sign up before the Subscriber Summer Spectacular starts!

In addition to the new summer series, you'll have access to all 363 classes in the Legacy Webinar Library including all the handouts!

Wow. Just, WOW! Incredible educational opportunities here! How many exclamation points can I put here!!! What an incredible layout for the summer and beyond.
Last year, I had to squeeze my shekels in order to become a webinar member - and it is so worth the money. High quality presentations, excellent handouts, details, ideas, helpful concepts that everyone can use. Top marks to everyone involved in the Webinar series, including this oh-my-In-Depth series!
Cheers from a very happy subscriber to the Legacy Webinars.
- Celia Lewis (Vancouver BC)