What’s In a Name? Challenges We Face With Family or Pet Nicknames 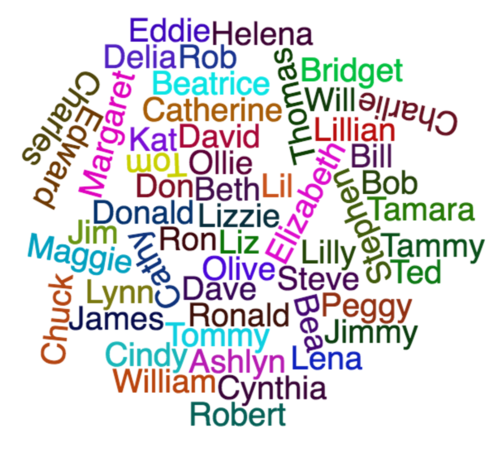 Names are important in genealogy research. But names can be confusing and can add challenges for the genealogist.

I've written previously about about surnames that were changed, either deliberately or accidentally, over generations in 5 Tips to Help You Navigate the Confusing Maze of Surname Variations. There are other surname variations that genealogists can find confusing and challenging. See Oh Those Dit Names!  and  Dutch Patronymics: Confusing or Helpful?

These surname variations can make research into those families challenging! But genealogical research can also be confusing when our ancestors used nicknames, or alternated between using their first and middle names.

Besides the standard nicknames that we discover as we research our ancestors, what other variant names might we encounter along the path of filling out our family tree?

Some standard nicknames most of us are familiar with are the shortened version of longer names such as Rob for Robert, Cathy for Catherine, Barb for Barbara, Dave for David, etc.

Most of us are also famliar with variations of alternate names that are almost, but not quite, shortened versions. These include such names as Bob for Robert, Jim for James, Maggie for Margaret, Ted for Edward, Bill for William, Cindy for Cynthia etc.

There are also nicknames that might not be quite so familiar, such as Delia for Bridget, Peggy for Margaret, Chuck for Charles.

Nicknames such as the type I’ve mentioned above can frustrate us if we are not familiar with them, but it is helpful to know that there are online lists of such standard nicknames which we can consult.

What about ancestors with first names that have absolutely nothing to do with the name they were given at birth?! These are people whose commonly used first name is not a derivative or nickname or anything other than some invented or pet name used by family and friends.

You can't assume that just because Grandpa was called Charlie that his actual name was Charles. Grandma might have been called Bobbie by her friends but does that mean her name at birth was Roberta? Not necessarily! Let me give you some actual examples in my family trees.

Examples of Family or Pet Nicknames

Everyone called my husband’s grandfather Charlie. Friends and family alike, even his wife called him Charlie. That was the name on their mailbox and in the local phone book. His driver’s licence was in the name Charlie. So of course we assumed his given name was Charles. But his birth registration found a few years ago showed that his actual name was Leon Thomas. How did he get the nickname Charlie? No one knows and he is no longer alive to tell us. It's a family mystery that will likely never be solved.

To add to the story, Charlie’s wife was called Kak by everyone in the small town where they lived. Family called her Kak but her name was Mary. Her nickname of Kak began when her first born granddaughter couldn’t say “Grandma” but managed a sound that was “Kak”.

My maternal grandmother was Dolly. I assumed that was her given name but she was born Ruth Ethel. When I asked her about the name, Dolly she told me that when she was born she was so tiny that her mother thought she looked like a little doll. That was what her mother began calling her, and the name Dolly stuck with my Grandmother her whole life.

Other examples are my friend Bobbie whose brother could not pronounce her real name of Celia. He called her "baby" which sounded like "Bawby" and thus Bobbie was the name used by family and later her friends. It was many years before I learned her real name.

So keep an open mind and don’t jump to the wrong conclusion such as refusing to believe that the genealogy record you found for a man named Achilles is in fact your Belgium great grandfather Archie when all the facts fit!

In this example, my husband and I were researching his great-grandfather Archie born in Tielt, Belgium in 1894. We knew his parents’ names but the only record we could find was for a child named Achilles. Once we had the name Achilles pronounced by a native French speaker, we realized that it sounds like Aw-SHEE, which of course can easly become Archie. And thus my husband’s great grandfather Archie was indeed the man named Achilles baptised in Tielt in 1894.

What are some pet names or family nicknames that you discovered for an elusive ancestor in your family tree?

My uncle Roy was called Bus or Buster by the family because Grandpa said Grandma was carrying a big buster when she was pregnant with him. And a friend was called Bunny because her older brother couldn't say her real name when she was born.

My mother's father's name was Thomas Sherrill Dill. His family always called him Sherrill; his wife my grandmother alternated between Sherrill and Tom; the people he worked with called him TS. Fortunately for me, he lived long enough, until I was 14, for me to know what his full birth name was -- and I've been able to "correct" a couple of censuses that were indexed incorrectly.

My second great grandfather was named Jonce Jones according to my great aunt. I wasted a lot of time looking for him before I gave up and looked for one of his children with an uncommon name. I found the family and discovered that his name was actually William Johnson Jones! I also have a second great grandmother who was always called Della. Her name however was Oleanna!

Lorine; I have a good one! For 129 years family has been trying to find a "girl" child transcribed and written in church records as POLLY. Found this person by accident in a cemetery by exact birth date, parents and grandparents. His name was PAUL; seems when baptized (you know how young German boys had curly hair and long flowing gowns at baptism) when asked the child's name/ grandparents gave his nickname PAULI but not understood by the recorder. They must have forgotten to pull up the dress or ask if male or female? Since the church records have long been printed I could only ask for an errata sheet be posted with all the correct info. Carl

Carl, I think this is my favorite story of name changes! I have something similar - one of my ancestors was Cornelis Vollick (baptised as Van Valkenburg but that's another story).

For years I was hunting for his baptism but could only find one for a Cornelia baptised at the right time and to his parents. It took awhile before I realized I was looking at a transcribed record and the transcriber had mistakenly read the "s" as an "a".

My French-Canadian great-grandfather was alternately referred to by the names of Levi and Eli. When I located the baptismal records for the children of my great-great-grandparents, I could not find him. But I did find someone baptized Hylaire, which I initially read as Hilary. It took me awhile to figure out that the French pronunciation of Hylaire is very similar to the English Eli (head slap). This family was full of name changes: Augustine (Augustus) became Samuel; Marie Mathilde became Margret; Adele became Eliza; and Martine became Martha. Jean-Baptist became John, which isn't much of a stretch. Only George and David kept their original baptismal names. Genealogists are true detectives!

I have heard that "Darby" was a nickname for Jeremiah, and "Nancy" for Agnes. I have a cousin (living) who was named Arthur, but has always been known as Pete and his mother Lois was always known as "Tad". We don't know why.

I've never been so confused by nicknames as when reading Russian literature!

I have multicultural heritage and found nicknames are very common. Just a few examples include: D’Adam (Italian) was a common surname in their town so my ancestors were known locally as Mescola. A German 5th Great-grandfather, Johann Georg Michel, was known as Gerich or Gerych Michel. My Polish Matwiejczuk ancestors used the alias surname of Bernacki interchangeably for many generations- reason unknown.

My uncle's real name is John. When my grandmother brought him home from the hospital, my mother (who was less than two years old) tried to call him "doll baby," but it came out "dobby." The name stuck, and to this day everyone calls him Dobby or Dob.

My grandfather was all was called O. E. Burt....on his business and personal letters.
His real full name was...Edgar Owen Burt, never heard why he switched the names, as he died during WWII, and I was still young.
My surname is Chapman...but was always called "Chappy" like my dad who gave me his given name.