News Home Legacy Webinars New to Legacy? Store
Windows 10 Survival Guide for Genealogists - the webinar AND the NEW book by Thomas MacEntee
Register for Webinar Wednesday - Researching Women: Community Cookbooks and What They Tell Us About Our Ancestors by Gena Philibert-Ortega

Genealogists shall not live by Google alone...

Ever since DNA proved that Griffin and John Brown ARE part of our Brown family, I've worked nearly every day to discover how exactly they fit in. I've even taken a day or two off from building our fence to find them - and that's big!

This weekend, after unsuccessful Googling, I turned to Cyndis's List. Within minutes I found precisely what Google could not find. I was trying to learn about possible mid-1800s Methodist church records in western Pennsylvania. Under the category of "Methodist > Libraries, Archives & Museums" was a link to:

While this was a good resource, it was still too far east. But if there was a central Pennsylvania conference, I thought there just might be a western conference as well. And while Cyndi's List didn't have a link for it, now that I had a title to search for, I returned to Google and searched for:

The first link in the list was entitled "The Western PA Conference - Home". No wonder I couldn't find it before. There, they had church records, pastoral records, and statistics going back to the year 1784! And while there were no actual church records like baptisms/marriages/burials, it did have a brief history of every church in the conference and my Griffin Brown was mentioned!

"A new Church was built in upper Tidioute in 1853 under the leadership of Judge Brown..."

So no "Griffin was the son of Asa and Elizabeth" statements there, but now I knew where he was living in 1853 and that he played a major role in the community. Better yet, an email address and a mailing address was listed for the local contact.

Hats off to Cyndis' List for pointing me in the right direction. Afterwards, I clicked on her "Submit a New Link" button and submitted the new Western Pennsylvania Conference for her consideration. Late last night I received the email from her that my suggestion has been accepted. Right now it's found by clicking on the "Browse New Links" button in the left panel.

If it's been a while since you've used CyndisList.com, I strongly encourage you to add it back into your research toolbox. And if you want a tour from Cyndi herself - take a look at our recent webinar: 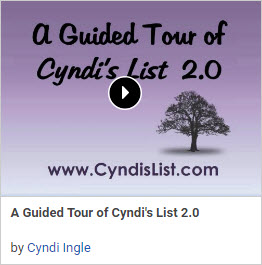 Geoff. I have to admit being guilty of not using Cyndi's wonderful list like I did back when I started researching. I learned about the list very early on. That was over 13 years ago and Cyndi is still going strong and providing us with fabulous information. I believe I will add a shortcut link to her list, in My Toolbar in Legacy.