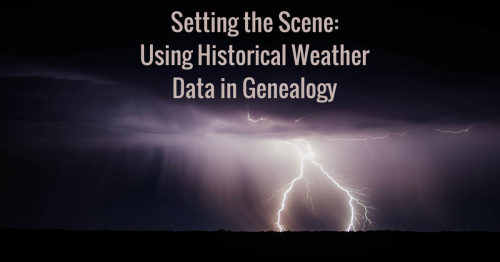 To most of us, it might not be relevant to our research what the weather was like on 30 July 1905, however if you were researching the Demmerle Family of the Flatbush neighborhood in Brooklyn, New York, the weather would carry a lot more meaning. A pleasant, carefree summer day at Brighton Beach turned tragic when a lightning bolt struck a flagstaff near the boardwalk and sent thousands of tourists and beachgoers into panic. Those hanging out at the base of the flagstaff for relief from the sun, were killed by the bolt, in a moment faster then they could sit down to relax. Among the six killed were the Demmerle brothers, Frank, 23, and Charles, 20, along with their sixteen year old cousin Robert Wasch.[1]

While an extreme example, it does demonstrate how the weather plays an important role in our ancestor’s lives. Climate patterns and weather phenomenon are a huge factor in the push/pull movement concerning historic migration patterns. Beyond the long-term historical changes in climate, day-to-day our ancestor’s lives were controlled by the weather.

Historical weather research can also aid with investigating family photographs. The fact that there is snow on the ground when the family lived in mild climate could narrow in the possible dates the photo was taken. The shadows present in an outdoor photograph can indicate the exact location and even exact time of day it was taken. 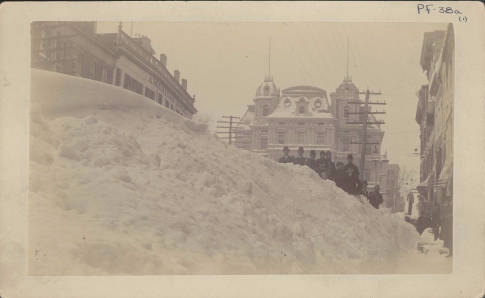 State Street in Hartford, Connecticut after the Blizzard of 1888.[2]

There is a diversity of resources for climatological research that can add to your family history. Historical weather data does not exist for every locale in the United States, however the National Archives holds records for hundreds of observatories concerned with recording scientific data about the weather. The Federal Government began taking an interest in the weather in 1818 when it directed employees of the Office of the Surgeon General to keep diaries on the weather. In 1870, responsibility of recording weather data was transferred to the Office of the Chief Signal Officer. It wasn’t until 1890 that the government designated a specific office for these types of observations when they established the first federal Weather Bureau under the Department of Agriculture, which has since existed in various forms.

The observations and reports collected from U.S. observatories in the 19th century has been microfilmed on National Archives Microfilm Publication T907, Climatological Records of the Weather Bureau, 1818-1892 (562 rolls). These are available at many branches of NARA, but are not online. Several microfilm publications hold weather data from earlier dates, such as records from the Blue Hill Observatory in Milton, Massachusetts and its various substations, which are available at NARA’s Boston Branch. Last week, a research question from a patron led me to examine these microfilms, containing the diary of Dr. John Jeffries, who recorded the daily weather in Boston all the way back to 1774! Claire Kluskens blog post, “The Weather Bureau and Genealogy,” has referenced other NARA record groups containing historical weather data. 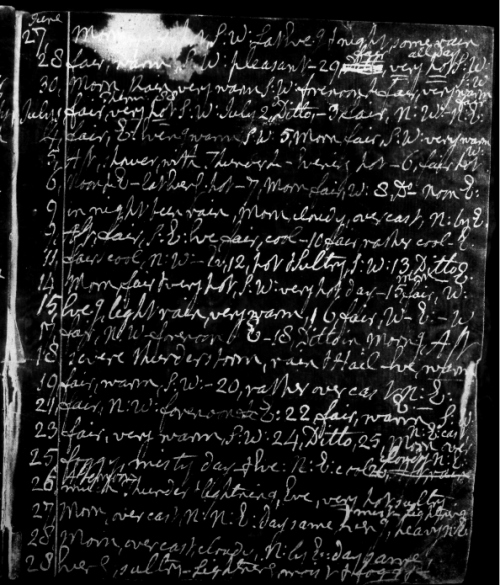 Some online resources contain databases dealing with historical weather phenomenon. You can access historical climate data and observations for the U.S. from the National Oceanic and Atmospheric Administration (NOAA). An “order” must be made to view the reports, but they are free and are delivered to your e-mail in a .PDF file. There are several datasets to search, but for genealogical purposes you will most likely want to view “Daily Summaries”, which provide basic data such as temperature, wind, and precipitation. The National Weather Service has a new project that gathers information on historical tornado occurrences on the United States, however the only available one is for state of Alabama. GenDisasters uses information from town histories, newspapers, and other sources for a database natural disasters in the U.S. and Canada dating back to the 18th century. Original research in newspapers can be a great way to gather historical weather data because several articles from a particular area can provide different accounts on one event.

What I found most poignant about the tragedy of the Demmerle brothers was their headstone. From my own perspective, it happens to be one of the most imaginative headstones I’ve examined and is symbolic of the power of nature. The motifs used in the headstone consist of vines and tree trunks, suggesting the family’s reverence for nature. Paradoxically, mother nature took the lives of these three young men. As the epitaph reads, “Taken suddenly in an hour of happiness, struck by a bolt of lightning.”

[3] Reproduced off microfilm at National Archives.