A few years ago my two eldest grandchildren ages 6 and 8 came for their annual weeklong visit. Every summer they stay with me for a week and every summer I create various genealogy games and activities for us to enjoy.

I was desperate for a new genealogy activity and decided I would take them on a hunt through a local cemetery for the grave of my great-grandmother's brother.

I figured they'd be fascinated by the hunt for half an hour tops but it would help fill the time, so I set up a Genealogy Game for them that I called The Cemetery Hunt.

I gave each grandchild a large piece of paper with the surname of the ancestor we were hunting for – Vollick.  I also added her married name of Krull so they now had two names they could look for. I explained, with a brief outline and a chart, the family relationship. They learned that Sarena Vollick, the woman we were looking for, was actually their great-great-grand-aunt, but they could think of her as their second great grandmother’s sister. 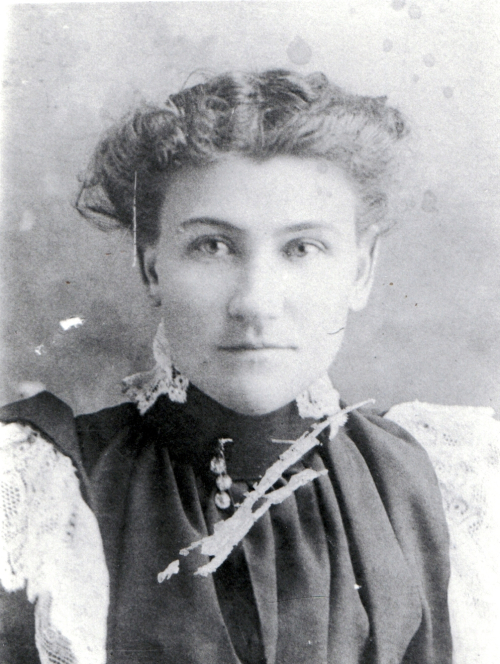 I showed them a picture of Sarena because I wanted them to understand that the stone was marking the final resting place of someone who once lived, laughed, loved, cried, experienced all the emotions we feel, and that she had been very real.

We talked about respecting the graves and gravestones of those buried in the cemetery and the manners one should use in a cemetery – not screaming and shouting, being respectful, not stepping on graves, not disturbing flowers or items left on gravestones and so on. Then I made a lunch and had them choose cookies to share in a picnic we would have in the cemetery and we set out.

I knew that with my physical issues I would not be able to keep up with them, and I was fairly certain they would each want to go in different directions in order to be the “winner”. One very important rule I stressed was that they had to be able to see me at all times. I didn't make the mistake of saying that I had to be able to see them, because of course that can be argued! ("Gee grandma I THOUGHT you could see me even if I went further down the path.....") No child can claim they could still see you if they turned a corner or were behind a tree.

We walked together for awhile, planning strategies – would they simply race around haphazardly or would they follow each row of gravestones to be sure none were missed? I let them decide how to begin but I wanted to give them the idea that planning before doing can often pay off. Off they went! They loved this game more than I could have imagined. Two hours later they were still walking around the stones, reading every single one out loud and running back to ask me questions. They were fascinated by the ages of some of those who were buried there, particularly the children. They wanted to know the stories of the military men whose stones they found, and if I didn’t know the personal story, they asked me about the war the man was in.

This gave us so many opportunities for learning such as math skills in figuring out ages of those buried by using birth and death dates on the stones, reading, history lessons about wars and epidemics, and talking about young children dying more frequently in the 1800s than now, and of course it was a wonderful bonding time. 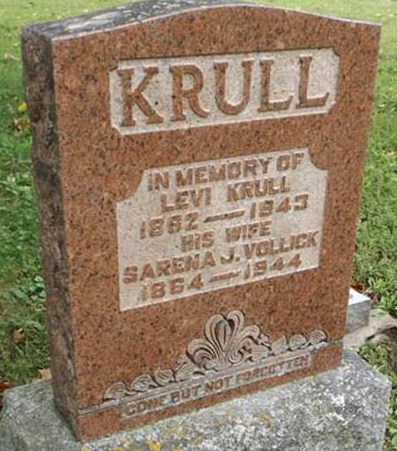 We finished the day with our picnic on a park bench in the cemetery, then more hunting where they were thrilled to eventually find Sarena Vollick’s gravestone. Then off we went home, having spent an entire afternoon in the Cemetery. 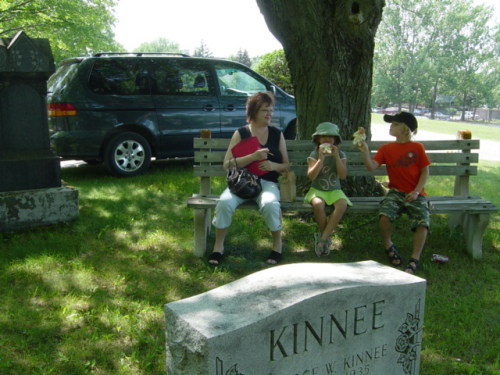 The next day they asked me if we could go on another Cemetery Hunt! All in all it was a very successful Genealogy "game".

One of the questions they asked was why some of the gravestones were partially hidden by overgrown grass, and very dirty so on Day 2 I gave each of them a tiny soft brush to brush off any dirt and leaves and we returned for another half-day of bonding and genealogy fun.

Feel free to use my idea to have some fun with your children or grandchildren this summer!

Image credits: All photos are from Lorine McGinnis Schulze

I have taken my grandchildren to the cemetery while I was taking photos, but I never thought to do this. I will try it next time, the oldest is 8 and can read quite well. Thank you.

This is an amazing idea for the kids! This could also be a good alternative to our usual weekend activities. Thank you Lorine for sharing this! This is already a good reason to trace my great grandparents :)

That sounds like a wonderful idea. Is it alright if I post it to a genealogy mailing list I send out? Am sure a lot of the folk would get a lot of use out of this great idea for the 'cemetery game' when their grandchildren come to visit. Unfortunately, my only grandchild is 26 an I'm not sure he'd want to play along; but you never know until you ask. I go on a cemetery crawl, similar to the amazing race, and you would be surprised how many of us adults actively hunt in unknown cemeteries for gravestones. What fun!

Sally, I'm glad you like my idea. You may of course post the LINK to my article, but you can't copy the full article and post it elsewhere.

I visit cemeteries with my kids often. Good for you for turning it into a game. We've had fun doing similar treasure hunts (if the cemetery is not too big!)

Many years ago, my young sons and I took a bus trip with my mother-in-law from Michigan to Kentucky. We visited many little cemeteries and the boys found the markers, names and dates to be very interesting. They all belonged to their father's ancestors. One of the little family cemeteries was located within a stand of trees on a farm right alongside a field of corn so high that we couldn't see over it. On the trip back to Michigan, my youngest son spotted a cemetery through the bus window. In a hopeful sounding voice he asked, "Mama, do you want me to tell the driver to stop so we can look in that cemetery?"

Sounds like a fun game and very informative. However, I would stress caution in cemeteries -- maybe some more than others? I have found rattlesnake skins in my own back yard here in Tennessee and I KNOW this county (Rutherford) is dotted with old family cemeteries. Cracked and broken tombs would make PERFECT places for rattlesnake dens. Just a caution. But it is still a good idea.

Great idea for involving the kids. Watch out for poison ivy in some of the less well maintained cemeteries.