5 More U.S. Military Records For Genealogy You Might Not Know About

As promised, part two of this blog series is now here. While the good news is that the U.S. Military kept an absolute plethora of records and spent considerable time extracting and organizing information, they can be difficult to navigate. For this reason I wouldn’t recommend using it as the first place you check for your ancestor. First, examine clues from family papers, photographs, letters, newspaper articles, and other genealogical sources to reconstruct some biographical information and perhaps even create a timeline of their military service. The more specific information you have, the easier it will be to find records of interest. Part 1 focused on medical records, while this post examines specific series of service records and government publications.

An officer within each company of a regiment was required to keep records of soldiers while in the field. Within the field books are included muster rolls, morning reports, and casualty lists, but the series with the most biographical information about each soldier are called “descriptive lists” or "descriptive rolls." Each entry in the descriptive list will include at least their name, age, place of birth, date, place, and term of enlistment, basic physical description, and amount of pay and effects such as clothing provided to each individual. Descriptive lists can be among series in National Archives Record Group 94, Records of the Adjutant General’s Office, 1780s -1917. These have been consulted by the War Department to make compiled service records for volunteer units, but are useful to consult because they include extra remarks possibly about the soldier’s character, promotions, nature of death, and role in that company. 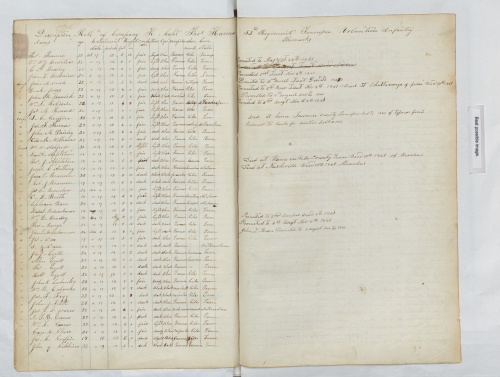 U.S. Military Academy Records – There are extensive series of records at the National Archives that can help to reconstruct your ancestor’s experience attending a military academy. The U.S. Military Academy was established at West Point, New York in 1802 and the Naval Academy in Annapolis, Maryland in 1846. Many of the 19th century records for applicants, cadets, and midshipmen have been microfilmed and are viewable on Ancestry.com. Military Academy Cadet Application Papers, 1805-1866, includes 242 rolls of microfilm arranged by year and there under by file number. Each applicant’s files include letters to the Secretary of War requesting appointment, letters of recommendation from relatives, friends, and members of congress, and letters of acceptance from the Secretary of War.

The Naval Academy records are held in Record Group 405, Records of the U.S. Naval Academy. Microfilm Series include actual academic records, such as records of conduct and registers of delinquencies, which includes their overall class performance, exam grades, and lists of demerits accrued by each cadet. Naval Academy registers include biographical information for each cadet including place and date of birth, city or town of residence at the time of enlistment, previous education, religious denomination, and the name, address, and occupation of the parent/guardian. Up until 1889, registers also include the cadet’s signatures, who was required to attest to the information given.

Proceedings of U.S. Military Court-Martials and Military Commissions – Soldiers who violated what are known historically as the “Articles of War,” would be tried under court-martial for capital offenses such as desertion, mutiny, murder or other acts of violence. A special military commission would be assembled if the offense was considered unusual. Court-martials are useful for genealogists because they are records with a helping of information. A court-martial proceeding will usually include detailed testimonies of individuals involved. They usually don’t provide a lot of biographical information about our ancestors, however you could gather additional clues for more records. Pvt. Charles Billingsley, executed by the U.S. Army for deserting his company, reports that he had several aliases during his lifetime. These names could lead to further documentation of that person. The National Archives has court-martial records in different record groups. Union General Court-Martials from the Civil War era, originally filed in Record Group 153, Records of the Judge Advocate General (Army), have been microfilmed along with Navy Court-Martials from 1799-1867. While only a select collection of proceedings have been microfilmed, Army court-martials for 1890-1890 have a case no. index on microfilm. The best way to locate a series of interest is to research entries in the National Archives’ Online Catalog.

Francis B. Heitman’s Historical Register and Dictionary of the United States Army – is important to know if your ancestor who served in the army was volunteer or regular army, because the War Department did not compile service records like they did for volunteer soldiers. You have to search enlistment papers and without knowing the ancestor’s unit, you will have a hard time. Therefore, this publication is a great reference to locate basic information so you can have better success searching in NARA’s collection for the army. While Heitman's register is more useful for service information regarding officers, it is still an important source for accessing history of regular army regiments and battles. Both volumes have been microfilmed by NARA as publication M1858, but are also available on Internet Archive and Google Books. Other publications compiling service data for different branches of the armed forces, exist as well.

Congressional Serial Set – Have you considered using published U.S. government documents for genealogy? While not necessarily a starting place, records of congressional hearings and government documents can provide useful bits on your ancestor. Many congressional documents pertain to information on military personnel. Among the documents in the Congressional Serial Set are lists of pensioners that will include the name of the pension claimant (widow/next-of-kin), original claimant (soldier), soldier’s rank, date of allowance, and pension certificate number. Researchers can also find registers of soldiers, casualty/hospital lists, and annual reports from the Daughters of the American Revolution, which provide list of members, gravesites for Revolutionary War Soldiers, and a description of their service. Records of the first 14 sessions of Congress are called the American State Papers but still belong to the Congressional Serial Set. Library of Congress’s website “A Century of Lawmaking” has free copies of the American State Papers and the Serial Set up until the 64th Congress. The most complete online collection of the Serial Set in on ProQuest.

Jake, I appreciate your series. My brother and I are trying to re-create a history of our father's military police escort unit in the European Theatre during WWII. I obtained several pertinent documents while visiting NARA in DC (Archives II actually). We're now dissecting names, locations and dates in those documents for clues to request other documents. Learning about other military records will be very helpful to our research. Thank you.

That's great Denise, glad you had some success. Happy to provide these tips!