The sun has set on the waters of Alaska and I'm truly thankful for the beauty of this part of the world and for the experiences of today.

My day began early. While most of the 2,500 passengers were still sound asleep, Ken, Diane, and I were preparing the conference center for our first day of Legacy classes. After setup we had a nice breakfast of scrambled eggs, bacon, corned beef hash, fruit, and orange juice. I love breakfasts on cruise ships. Introductions were at 8:30 where we learned from each attendee how long they've been using Legacy and where they came from. Our furthest-away attendee was all the way from Australia, wow!

My first class was on "Researching with Legacy" where I related my recent experiences with DNA testing, how I used Legacy to organize my findings, and how to best keep track of research-in-progress. Then I showed the split screen tool (View > Split Screen) and learned something really neat. Using this tool you can compare multiple parts of your family file at the same time. On the left I displayed Griffin Brown's Descendant View and on the right I displayed Asa Brown's ancestors. We noticed that by comparing the two families in this way that we could see naming patterns - in Griffin's Descendant View we noticed many of the same names that were displayed in Asa's Pedigree View. I've never considered using this tool for this purpose until today. Legacy's so great! We also learned how to add pictures to Legacy, display them in charts and reports, and how to handle missing media using the Gather Media and Media Relinker tools. We also looked at Google Photos, its backup capabilities, and its facial recognition. For the final class of the day Ken taught us about locations, mapping, and the need for standardization and clean up of our data. Everyone left with some new ideas. Here's Ken: 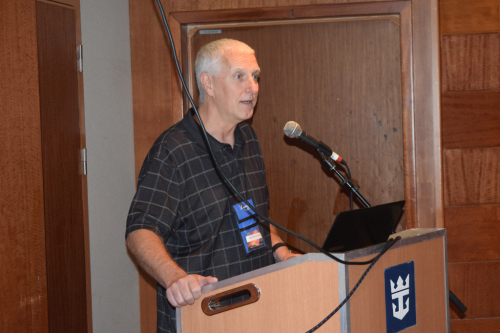 Lunch today was a delicious salad and lamb-filled pita, followed by a small bowl of...you guessed it...ice cream. Towards the end of lunch we started noticing small chunks of ice in the ocean.

This meant we were getting closer to one of the wonders of Alaska - the Hubbard Glacier. 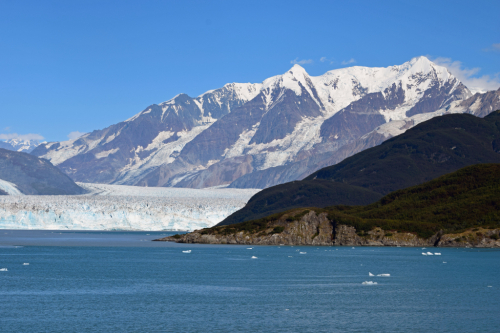 From a distance, I guessed the ice was about ten feet high. My wife guessed thirty. Boy did we ever misjudge the magnitude of what we were about to see up close. Hubbard Glacier is about 700 feet high and measures 76 miles from its source to the sea. We learned that the ice at the sea was more than 400 years old. The highlight of our trip to this point was the massive chunks of ice that crashed into the water. This glacier calving roared like thunder. It was beautiful seeing how active nature was.

Later we found the ship's pool table which had a built-in leveling device. I don't think it was working very well though as we scratched on the opening break, followed by the eight ball ending the game much too early. Fun nonetheless. 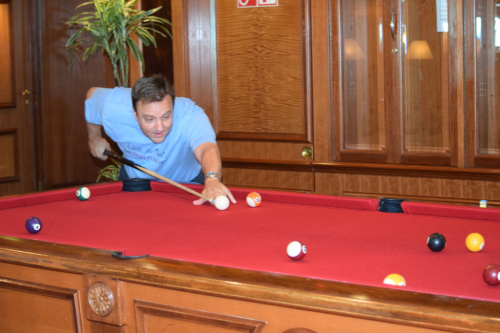 After a short nap (cruising is hard work) we learned that it was formal night, and so I quickly hung up my clothes in the shower, steaming them to get the wrinkles out, and then learned that I forgot my tie. Oh well, there were others without a tie at dinner, and the food still tasted good. I surprised myself when I ordered the "catch of the day". This is when I realized how much my taste buds have grown up over the last 12 years of Legacy cruises. I used to be a hamburger and steak guy at every meal, but I'm now taking risks with my palette. It goes without saying that once again, the meal was delicious. At desert time, I couldn't decide if I wanted the lemon pie or the strawberry cheesecake, so I ordered both.

On our way to the evening performance we discovered that the ship had a cinema on board so we stepped in to check it out and ended up watching a great comedy - Mother's Day. So we missed the main show, but made up for it by finding the 24-hour pizza bar near the pool. After a slice of chicken and a slide of pepperoni, and a coconut cookie, we called it a night. And now that it's well into the wee hours of the morning, I'd better get to bed. We've got a big day of whale watching ahead of us.

My husband and I took an Alaskan cruise in 2013. Our first and only cruise together as he died in April of this year. Your posts are bringing so much of that exciting time back to me, making it both pleasurable and a tad painful. I am so happy to be able to relate to the pictures you are posting here. Enjoy the rest of your cruise. You never know when you will need those memories to cling to.

Nice post Geoff. It's funny as we have just booked an Alaskan cruisewith www.cruiseparadise.ie and whale watching is also one of our "to-do's' while on board. Lovely pictures. It looks absolutely stunning there.