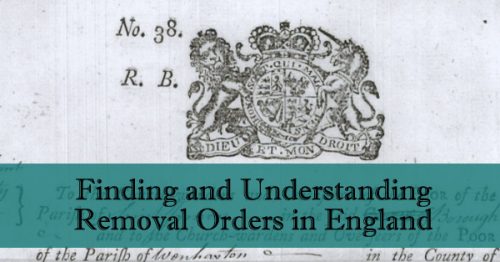 A search of the National Archives United Kingdom website can provide many interesting documents for genealogy research. One of the items I found was a Removal Order for my 5th great grandfather Thomas Blanden. Thomas was born in Wenhaston, Suffolk, England in 1739, enlisted in the Suffolk Militia as a drummer at the age of 20, and was discharged in bad health 28 years later. 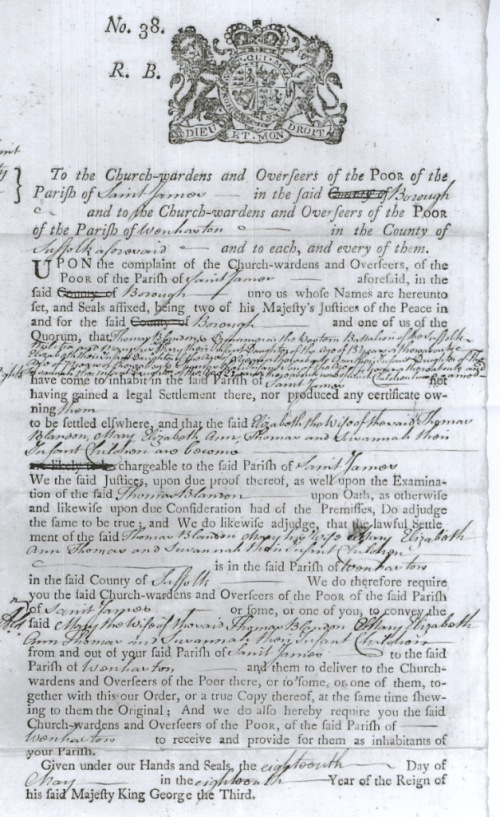 Removal Orders were new to me so after ordering the documents from the Archives I did my homework and researched the history of Removal Orders. In 1662 England, an Act of Settlement was passed to define which parish had responsibility for a poor person. A child's birthplace was its place of settlement, unless its mother had a settlement certificate from somewhere else stating that the unborn child was included on the certificate. From the age of 7 the child could have been apprenticed and gained a settlement for himself or he could have obtained settlement for himself by service by the time he was 16.

After 1697, the poor were allowed to enter any parish in search of work, as long as they had a Settlement Certificate signed by the church wardens and overseers of their place of settlement and two magistrates guaranteeing to receive them back should they become chargeable. No one was allowed to move from town to town without the appropriate documentation.

If a person entered a parish in which he did not have official settlement, and if it seemed likely he might become chargeable to the new parish, then an examination would be made by the justices or parish overseers. From this examination on oath, the justices would determine if that person had the means to sustain himself and, if not, which was that person's parish of settlement. As a result of the examination the intruder would then either be allowed to stay, or would be removed by means of what was known as a Removal Order.

Removal Orders would often take a person or a family back to a place of settlement miles across the country, sometimes to a parish they had only known briefly as a small child. It was not uncommon for a husband and wife to have their children taken from them, each being removed to separate scattered parishes.

On 18 May 1778, a Removal Order was served on my 5th Great Grandfather who was recorded as Thomas Blandon, Drummer in the Western Battalion Militia of Suffolk. Thomas, Mary, his wife, and their children Mary, Elizabeth, Ann, Thomas & Susannah were ordered removed from St. James, Bury St. Edmunds and sent to Wenhaston.

The order made me wonder what the circumstances were surrounding Thomas and his run of bad luck. Having found a Chelsea Pensioner record for Thomas dated 1787 I knew that he had been in the Army for 28 years and was being discharged with “bad eyes” and “worn out.” No doubt he couldn’t provide much, if any, income to support his family and thus the Parish did not want to accept responsibility for supporting them. 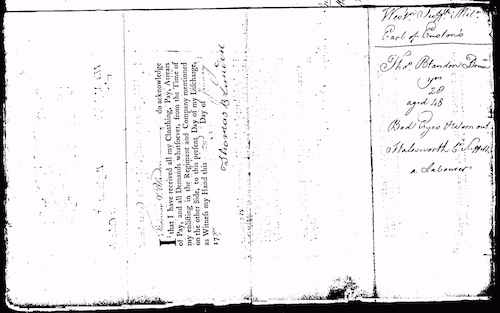 A Settlement Certificate would have more genealogical information but since I did not find one for Thomas I was happy to see that the Removal Order gave the ages of each of Thomas and Mary's children – they were aged 1 to 13 years old. How difficult it must have been to be uprooted from friends and neighbours, and sent from the Parish of St. James back to the parish of Thomas’ birth in Wenhaston.

To my surprise the Removal Order was a form with blanks to fill in by the clerk recording the details, which indicates to me that there must have been a lot of them served! What a wonderful item to find. If you have English ancestors, why not have a look on the National Archives website? You might be surprised at what is there. If you have not used this resource, see How to Use the National Archives United Kingdom Website to Obtain Ancestor Documents.

UPDATE: Thanks to Helen Smith for pointing out that most settlement examinations, removal orders will be found in parish chest material for individual parishes so should be found in County Archives rather than in the UK National Archive. Genealogists can use the Discovery Search Engine at the UK National Archives but if a search does not return results they are advised to go directly to the county Archive of interest.

Very interesting. Brings to mind a question, having to do with the poor in English towns/villages.

I have a digital copy of a settlement examination for my 3 x by grandmother. I managed to see the original record at the archives. It was most revealing and I have written about it on my blog.

Most bastardry bonds and settlement examinations, removal orders will be in Parish Chest material so can be found in the County Archive rather than the National archive. Linda check out he Cambridgeshire County archive for material relating to your parish.

Thank you Helen for the correction. I found mine by searching on the UK National Archives and the results took me to the County Archive that held them.

If you look in the FamilySearch catalog some parishes have an item under "Poorhouses, poor law, etc." of Parish Chest Records. So worth a look to see if there's any records on film.

So, Robert Frost was right:

Home is the place where, when you have to go there, they have to take you in.