Looking through our school yearbooks evoke for many of us cherished memories of youth. They may almost present laughable (for me personally, cringe-worthy) moments when we see awkward photos of ourselves. However, for genealogical research, yearbooks are an important resource for several reasons. Consider that when we research our ancestors, most of the records begin in their adult life, when they are legally able to marry, vote, and own property. The formative childhood years are often lost to time, but researching in yearbooks and other types of school records are an important avenue for genealogists.

This post focuses on the importance of yearbooks because in many cases, other types of school records such as transcripts and student files are lost or difficult to access. There may exist a variety of records pertaining to schools and students. However, a discussion about those will be for another post. Yearbooks are the best place to start for tracking ancestors as students or teachers, because they are the most available and complete source to date of those who attended or worked in the school.

There’s not a whole lot of history on why and when yearbooks were created, but beginning in the 1600s, students compiled their own yearbooks with newspaper clippings, dried flowers, and personal musings. The first published yearbooks were created in the 19th century, which were traditionally called annuals or class books. Soon after the daguerreotype was invented, a few schools had photographers come into take pictures of graduating students, but the yearbook photograph did not become mainstream until the invention of the Kodak Camera in 1888. Around this time is when yearbook publication in schools begins to greatly increase in popularity and most collections date back to at least the early 20th century. With that in mind, yearbooks may only be useful for genealogy in the more recent generations of our family trees. 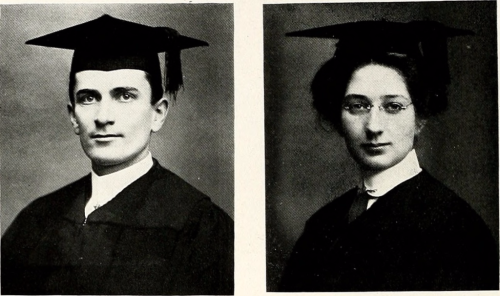 First and foremost, yearbooks are able to put our ancestors in a time and place. Beyond that, they offer a variety of detail we couldn’t glean from traditional genealogical sources. In yearbook listings, particularly from colleges, they offer a detailed record of a student’s experience at the school. They include any student clubs or organizations they belonged to and sometimes provide insight into what they might have been like in terms of personality, academic performance, and other personal qualities. I have seen some which include date and place of birth, but this is less common. The military and its academies have published annuals for a long time, which could facilitate in a genealogist’s search for military records of their ancestor. If an ancestor were absent altogether from a particular school’s yearbooks even when they had been known to attend, it would provide a strong clue they either dropped out or transferred to another institution.

When you are using yearbooks for genealogical research, examine the entirety of it’s contents. They are never indexed, so take your time with them to find useful pieces of information. I would suggest surveying the entire listing for each class because these are people your ancestor interacted with directly, thus belonging to the “FAN” club and could prove significant in further research.

There are often pages that include personal musings, class histories, photographs of student life and all the student-run organizations. They do provide faculty information and perhaps even photographs of the faculty, so it’s important to think of yearbooks as more useful than just for researching students. Many yearbooks also included advertisements from businesses that sponsored the publication of the yearbook or were closely affiliated with the school, so in some cases, yearbooks have information on ancestors who didn’t attend school at all.

Finding yearbooks is relatively easy because they don’t contain sensitive information like other school records and survive in much greater numbers. They could exist in physical, digital, or both forms of publication. It’s best to start by contacting the school directly or library for the town in which your ancestor attended school for the whereabouts of physical copies. In many cases, other local repositories such as historical and genealogical societies have copies of yearbooks as well. If you can’t make an in-person visit, they should be able to do a lookup if you know the school and years of attendance/graduation.

Thousands of volumes of old yearbooks are available online too. Many yearbook sites were created to help facilitate class reunions, but they help genealogists too. Relatively Curious has a great post on yearbook research, listing important sites and databases. Here are a few sites to start with:

Yearbooks provide us with a fascinating perspective on our ancestors' lives and serve as an important document of social history. What have you learned about your ancestors through yearbooks?

I have several yearbooks from family: my father, an uncle, a grandfather, and others. They indeed are useful for a number of bits of information. The advertisements can tell a lot about fashions and technology of the times in which our ancestors lived.

Yearbooks may also show that your ancestor had famous classmates. My uncle's Glendale Union High School annual from 1926 showed a couple pictures and more information about one of his classmates named Marion Morrison. He played football and was chair of the senior dance committee. We know him today as John Wayne!

How would I source a yearbook from classmates.com and what template would I use with legacy??

Yearbooks are great. Besides getting a picture of your relatives at a young and idealistic age, they can give information you wouldn't have otherwise known. Who knew my dad's high school nickname was Adonis? My maternal grandfather was little known, but his 1917 M.I.T. yearbook provided me with confirmation that the one formal portrait I had commemorated his college graduation as well as a surprise baby picture of him at the bottom of the senior entry, that format done for the seniors that year. I also learned that he was on the track team---another unknown interest of his. More leads to fill in my ancestors lives.

If you have yearbooks to dispose of, where will be the best places to donate?

I'd recommend contacting the town library or historical society which the school is a part of.