Where does Newspaper Research fit into YOUR Genealogy?

Never before have I discovered so many "juicy" tidbits about an ancestral family - wow am I glad I've finally made newspapers a major part of my research efforts. They've added so much flavor, even to my uninteresting families. Stories of regret, happiness, divorce, wealth, and even suicide have now made their way into my Brown family narrative. Here's a sampling of what I've found recently:

"I never felt so lonesome in my life and I never worked so hard in my life, but I never was so happy in my life."

"The money comes in so fast we actually don't know what to do with it. We had gold money, paper money, silver money and gold dust hidden in every nook and corner of the house. Loren tore up a plank from the kitchen floor, and we had over $5,000 in all kinds of money hidden there. It was an awful anxiety to have the stuff lying around like that, and it worried us more than the hard work we were doing. The place was full of people, dead broke and hungry, and they would cut one's throat for a dollar. We are just everlastingly fixed here to make money. I have heard of bonanzas, but I never dreamed we would strike one."

"The groom is well known in this city and county. At one time he was the owner of the land surrounding St. Anthony Falls, having conveyed it from the government years ago. Mr. Brown would have been immensely wealthy today had he held onto his purchase, but a desire to go farther west induced him to part with it."

"Nancy J. Brown has brought suit against her husband, Marsden Brown, on the ground of cruel and inhuman treatment and habitual drunkenness.

Our ancestors had their ups and their downs, just like we do. Yet, I never dreamed of learning these kind of details about one of the families I've come to love so much.

I often get asked, "if you could subscribe to just one or two online genealogy services, which would they be?" That's a tough call for lots of reasons. Perhaps the biggest of them all is you never know what you might be missing out on if you limit yourself to the one or two most well-known subscription services. To learn what I wrote about above, I had to turn to four different newspaper services:

I began by doing a name search for Marsden Brown.

Of all of the relevant results, there were only two duplicates. Had I only searched my long-time favorite, GenealogyBank, I never would have learned about Marsden's land purchase that surrounded St. Anthony Falls. This story, part of the wedding announcement to his second wife, was only found in NewspaperArchive.  The announcement of Nancy's desire to divorce Marsden was only found in Newspapers.com. The letter, written by Marsden's daughter who struck it rich in the Alaska gold rush was republished in a couple of newspapers, and found only at GenealogyBank and in Chronicling America.

So if I had to choose just one newspaper subscription service, I don't know that I could. I would always be wondering if I was missing something. They each have exclusive content. Adding up the cost of each subscription was not in my budget, but then, I've gone for years wondering if my evidence for Marsden's second wife was strong enough. Because of this sentence in the marriage announcement I found last night, there is no longer any doubt I have the right relationships:

"They will pass their honeymoon with Mr. Brown's daughter, Mrs. Fred Puhler, of Ada, this state."

To summarize how I'm feeling today - YIPPEE! I love what I'm discovering about my family. And isn't it true, the more we learn about our past the more we know about who we are? I'm so glad I switched my major in college from Accounting to Genealogy.

Webinars - 13 of them at www.FamilyTreeWebinars.com 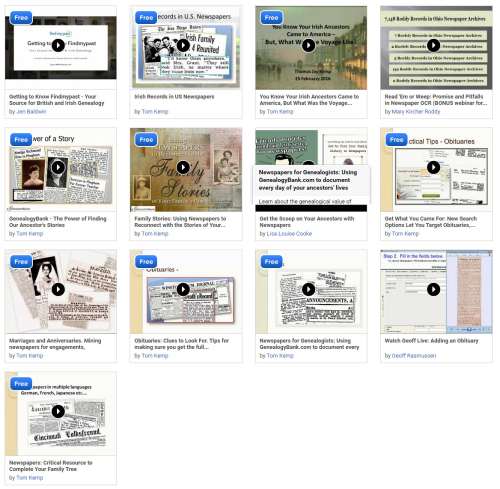 Book - How to Find Your Family History in Newspapers 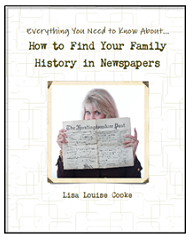 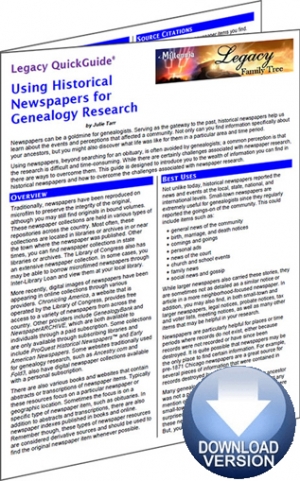 Hello Geoff, loved reading the article. I was wondering if there are any good Canadian Newspaper websites? Most all that I have looked at only cover the US or Alberta. I am looking for newspapers in Ontario

In the beginning I only knew that my Grandmother had a brother who drowned. Using newspapers, I was able to piece together the details and identify the correct John Burbach. Newspapers, obituaries (from Milwaukee's German newspapers), and cemetery records enabled me to two cousins both named John Burbach who lived and died within 3 years of each other. The post is at http://hangingwithdonna.blogspot.com/2012/07/a-tale-of-two-johns-solving-mystery.html

Barbara
There are Canadian Newspapers on Find My Past.
I use the British Newspapers but as some Australian researchers have pointed out sometimes you need to look further afield to find what you are looking for and I have used Trove for Australian Newspapers.

Hi Geoff - can you imagine that many of us have also come to love the Brown family. With your guidance and that family our skills in genealogy research just continue to grow. They have also helped us to learn the remarkable versatility of Legacy.
My husband is a retired reporter so it is great to see how valuable our old digitized newspapers can be.

Newspapers are such a great source of info. Most are great but every once in a while you get some subtle errors in facts. But on the whole they are quite correct. Obits are the most resourceful followed by birth weddings. Events one are great for learning about how they lived and all other sorts of information.