News Home Legacy Webinars New to Legacy? Store
Save $10 on all Legacy software PLUS save on QuickGuides, Books and more!
Register for Webinar Wednesday - Becoming a Genealogy Detective by Sharon S. Atkins

A Melting Pot of Money and Manners: Researching Newport’s Bellevue Ave Neighborhood in the 1880 Census 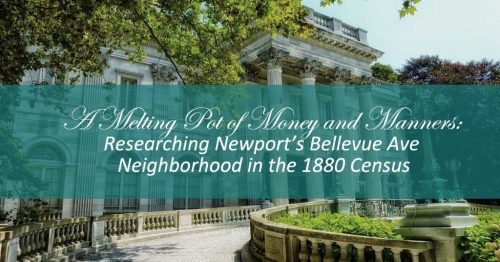 The evidence of Newport’s pre-eminence in the world of money is clear from one glance at the 1880 US Federal Census.  Ignore the names and look at the occupations and places of birth. Children born while their parents were working overseas. Servants from so many countries it’s a wonder they could communicate with each other and their employers.  A long list of jobs meant to support the tiny families living in big houses.

Census enumerations keep a basic record of who’s where. Addresses. Birthplaces. Occupations. The amount of detail provided depends on the census and when enumerators captured that information. In the 1880 census that date was June 1st. It was the second decade of the period that Mark Twain later named The Gilded Age.  Wealth expressed in property and lifestyles.  Robin Leach, host of Lifestyles of the Rich and Famous (1984-1995) would have had a field day.

Browsing the census at the beginning of the summer season of 1880, is a who’s who of nineteenth century personalities. Newport was the place to be seen.

Max Outrey lived on Narragansett Boulevard with his wife steps from the Atlantic Ocean along with their three children and seven servants—private cooks, maids and a butler. His occupation. French Minister. Not a clergyman, but the Minister of France who worked with Presidents and Senators in Washington, D.C.  His household staff was primarily French, with the exception of one woman from Norway and one born in Washington, D.C.

Next-door were John Carey, Jr. and his wife living in their home known as Grasslands. He was a retired metallurgic engineer. They had nine servants from England, Ireland, Massachusetts and New York. Mrs. Carey was the former Mary Alida Astor, daughter of William Astor, of the New York Astors.

In the winter these families lived in Washington, D.C. and New York City but in the summer the social season revolved around Newport. Local newspapers ran columns discussing who was renting which houses and who was in town.

Along Bellevue Avenue stands a series of buildings that stood when the Carey’s and Outrey’s visited.  In July 1880, the Newport Casino opened with grass tennis courts. The building and the grounds are now the International Tennis Hall of Fame.  It was one of the first social clubs that included sports activities. You can still play tennis on the original horseshoe court! 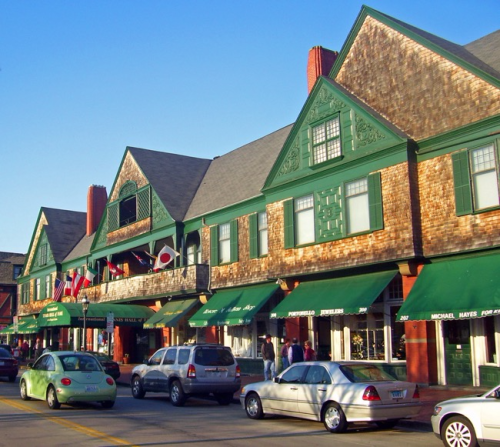 It’s not surprising that New York businesses that relied on wealthy patrons would also travel to Rhode Island following the money and opportunities. Photographer Louis Alman, who operated studios in both Newport and New York, moved seasonally with his clients beginning circa 1885. He set up his studio on Bellevue Avenue. Down the street was the internationally famous Notman Photographic Studio, which operated establishments in major cities in the U.S., Canada and elsewhere. Every day coachmen drove their employers down Bellevue Avenue in a parade of envy.

Alman’s city directory listing mentioned that his studio was near Ocean House. It was a significant well-known local landmark. Ocean House was a much-copied symbol of first class nineteenth century tourism located near the Casino. Built in 1846 the Gothic-inspired structure replaced the original Ocean House that burned down in 1845 only a year after being built.  Bigger and better than its predecessor, it was a five-story hotel featuring two hundred and fifty feet of frontage along Bellevue Avenue and accommodations for over four hundred guests.   It is now a parking lot.  Alman knew with that many guests in the area he was bound to get business.

He photographed this woman with her well-groomed poodle in the 1880s. Based on her dress and the dog she was likely a summer visitor. The dog is a pampered pet, likely kept clean, trained and groomed by a servant. A luxury.  Her owner wears the latest style of dress with a modest bustle and a summer style straw turban shaped hat. Her side pose not only shows off the shape of her silhouette, but also presents the best qualities of her canine, reaching for a treat from her gloved hand.  In this period, photo studios used architectural details like balustrades and fake grass to make it appear their customers posed outside. The painted backdrop in the background makes it clear this was taken indoors. 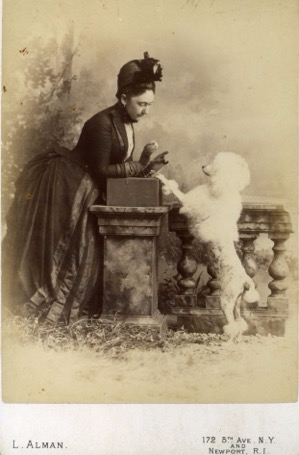 Unfortunately, this cabinet card ended up discarded. No name on the back and no history of ownership to link it to a family.

If you want to see how the wealthy lived in nineteenth century Newport, RI you can browse the census looking for particulars about where they resided. On Ancestry.com, select the 1880 census then on the right hand side of the screen select browse, then Rhode Island for the state, Newport County and then Newport (ED 95). Street names appear along the left hand edge of the census page. Watch for Bellevue Avenue and Narragansett Avenue to see how the affluent lived.

Maureen A. Taylor is an internationally known photo detective who specializes in solving photo mysteries for clients and organizations. She is also specializes in Rhode Island research. Learn more about Maureen at www.maureentaylor.com.