The Search For Missing Friends 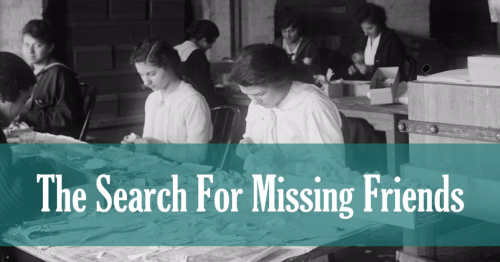 The voices of Irish immigrants ring clearly through the information wanted advertisements they placed in the Boston Pilot. Catherine (Burns) Doyle, originally from Mucklow, County Wicklow who with her husband immigrated to St. Andrews, New Brunswick, sought “great comfort” in learning what happened to her brother Matthew Burns because she had not received a letter from him for years.[1] Others, like Bridget Galvin of Danielsonville, Connecticut, used the advertisement to find her husband and father of her two children, Thomas Galvin of Killbegnet near Creegs, Paris, County Galway, who deserted them in July 1863.[2] For 89 years, the Boston Pilot served as a voice for many Irish men, women, and families who sought to find a piece of home and stability in an unfamiliar world.

The Irish came to the United States in the millions during the 19th and early 20th century. Famine, economic and social conditions, and religious persectuion would have a deep impact on the citizens of Ireland. The Great Famine migration in particular, tore through families and a chaotic migration overseas left many family members separated from one another. The result of this migration, along with family dynamics and personal motivations put family members thousands of miles from another, such as the Waughans from the parish of Clonakilty, County Cork, Ireland. Daniel lived in Ansonia, New Haven County, Connecticut and was looking for his son Thomas who was last seen in New Orleans. Other Waughans mentioned were Michael of the townland Twanies, Clonakilty parish, County Cork and John of Waverly, Morgan County, Illinois.[3] It was probably Daniel’s intention to include more family members in the advertisement to increase the likelihood someone could establish a connection and write to one of them.

With a collection of 40,594 advertisements from 1831-1920, the data only represents a small fraction of the Irish diaspora that included some four and a half million people. However, this collection is very useful to descendants of Irish working on their genealogy. The Boston Pilot column gained international recognition and includes Irish living all across the United States, Canada, and Ireland, so it’s far from limited to the city of Boston.

The value in these records is the immense amount of information they provide on Irish origins. In particular, they often mention the townland of origin for each ancestor and his/her family. Identifying the townland is the ultimate prize for any Irish researcher. Townlands are smaller divisions that exist within the civil registration districts and parishes of Ireland that go back over a thousand years. They range greatly in size, but are essentially a place name inhabitants used to identify the land they lived on. The more specific detail you have on someone’s origin or location, the easier it is for you to identify the family. While it is possible to identify an ancestor from Ireland with just the county or parish, it can be more difficult.

There are of course other valuable nuggets of information in these records, such as approximate time of emigration, addresses, names of parents, and other facts that can be added to your Irish family’s story. All the information helps in confirming their identity when you search in records made in Ireland. An ancestor can elude our research and some types of genealogical records don’t go beyond saying they are simply from the country of Ireland. Often these advertisements will list there last known whereabouts and migratory patterns, presenting researchers with invaluable clues. James Coughlan noted that his five Coughlan relatives, James, John, Margaret, William, and Ellen of Kilworth, County Cork, Ireland, were known to be in Great Barrington, Massachusetts fourteen years ago and believed to have moved to Wisconsin.[4]

There are several websites which allow you to search the advertisements, originally transcribed and published in 8 volumes.[5] Ancestry.com, AmericanAncestors.org, and Boston College have versions of this database. You can sort the information with different parameters including point of origin and address within the United States. When I’m researching an Irish family, I always curious about the origins of other families living nearby and want to see if any patterns exist. I could filter results by just county or city, to see if multiple families are originating from a particular parish or townland. When I filter all advertisements with addresses in Berskhire County, I receive 226 results on Ancestry’s version and notice the people represent many of the counties. Flipping this concept, I can restrict to one point of origin in Ireland, and see how inhabitants of that townland may be spread throughout the United States. This is a good example of how to use databases to support your research without typing in any names.

One other publication is Voices of the Irish Immigrant: Information Wanted In “The Truth Teller” New York City, 1825-1844. This is still in print, with the exception that the Hathitrust Library allows users to search within the text for names and keywords for pages that include a matching word or phrase. Many other newspapers would host these types of advertisements where people requested information on relatives, so you never know where a find like this will appear.

Even if your Irish ancestor is not mentioned in the Boston Pilot advertisement, consider how this database could help provide evidence to support your conclusion about your ancestor’s point of origin in Ireland.

Jake Fletcher is a professional genealogist, educator and blogger from Massachusetts. He currently volunteers as a research assistant at the National Archives in Waltham, Massachusetts and is Vice President of the New England Association of Professional Genealogists (NEAPG).